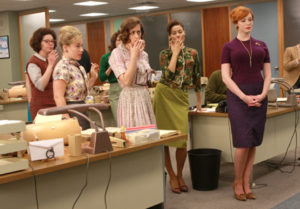 Lots of talk about Mad Men and the treatment of women during the ice-clinking, smoky bar, burning the midnight oil, hat-wearing era. I love the show, and I love the fact that such sexism seems absolutely impossible to the many of teens in my life. They simply can’t believe it was really like that “back then.” But you needn’t travel back to the 1960s to experience such brash disrespect and injustices directed at many, in fact, most, women. Some subtle, most not. Back then, in fact, wasn’t so very long ago. Seems everybody’s got a story.
When my clever, self-proclaimed feminist male boss interviewed for my replacement during maternity leave in 1992, he hired a capable, experienced advertising writer from ‘the city,’ aka New York. (The Only City if you live anywhere on the East Coast. Sorry Boston, Philly, and DC. But really, you gonna argue?)

Women Getting the Shaft: Circa 1990s

1. This real writer also happens to be drop dead beautiful, which did not go unnoticed during her interview process. ‘You are really so gorgeous, it wouldn’t hurt a girl like you to put your photo on your resume.’ He at least read her clips.

2. During the same pregnancy, I was to travel to an ob/gyn conference to help hawk medical textbooks. My ob was attending the same conference and I had medical permission to attend. The sales director, however, thought differently. “You have a baby to think about now. You need to be home, focusing on that.”

3. And finally, from the same employer: I wrote copy regarding a gynecology text, highlighting thorough breast exams. The editor threw it back at me, saying ‘take the boob copy out; don’t you know your anatomy?’ Not sure when his last pap smear was, but at mine, there was a breast exam.

The fact that I was actually writing, and not fetching coffee, does show we had evolved somewhat (although I did do so for my first 3 jobs in the city). I presume it’s a process, but need it take so long?

More, more, more. Too many more.

And then there’s today. Where people look at this 46-year-old mom, and add a little ageism (this is old?) and family-ism to the mix making it a real feat to reenter the workforce that’s come so far. And if you think there’s no discrimination against hiring people with a family, you haven’t been on an interview yet.

How ’bout you? Did you – or do you – experience any Mad Men-like sexism? How has it changed? Please, please tell me it has changed.

We Lost a Good Guy
What’s in a Name?

An irreverent storyteller with a foul mouth and big heart, Kathryn Mayer (aka Kathy and/or Kate) is a writer, humorist, and (former) activist writing out loud with humor and grace about little life moments with big ripples, including the space between parenting and aging parents, social issues, angsty reflections of midlife, and, sigh, gun humpers. Still. Sometimes a big deal, sometimes not Mayer is a national award-winning columnist, according to the National Society of Newspaper Columnists, and her essays have been recognized as Voice of … END_OF_DOCUMENT_TOKEN_TO_BE_REPLACED