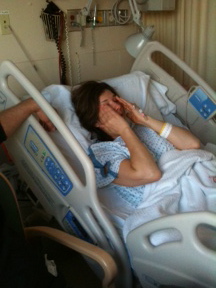 My husband gets all the Mother’s Day awards this year: I get nothing but cortisone in the ass, Valium, Prednisone, and a walker. I have a walker. Not forever, but for now.Here’s the short story: I herniated a disc in my lower back – aka ass – and went from jogging, working, driving carpool and making pork chops one fine Monday, to pissing on/in/somewhere near a bedpan. Most of the time.

In the scheme of cancer, stroke, dead dads, tornadoes, floods, dying kids, I hate to even blog about something so trivial, but for the last 4 days, I thought my days of bitching and tweeting and kvetching about the life I live was over.

But it’s not, and for that I’m forever grateful.

After a hurt back exasperated into a complete collapse on the bathroom floor convincing me I’d be that dead mom in the morning, too dumb to call 911 the night before, hence I decided I didn’t want to go out that way.

So I yelled for Kid2, but Kid4 awakes instead, comes downstairs, steps over me on the floor of the bathroom and proceeds to take a crap.

“Why are you on the floor Mommy?”

I asked him to please get his older, more mature sister, Kid2. Which he does. After he flushes and washes his hands. A solid win for the mom.

Kid2 arrives, like 6 days later. Told her calmly not to be afraid, my back was hurt, and I was calling 911 to get some help but didn’t want to worry her with lights and sirens.

She wasn’t worried. She got me upright, sort of, then the phone, where I called from my precarious perch on the shitter, handed her back the phone, which she promptly hung up.

I explained to my darling teenage #2 that our town EMTs volunteer, and most likely were kids or parents she’d recognize, so she immediately rushed upstairs to get dressed, and I’m while I’m not positive, I think she did her hair. And quite possibly a little make up.

The little EMT boys took me to the hospital, breathing a little too hard in my opinion loading my broken ass into the bus, and 4 hours later, I texted my rather attractive husband to let him know my heart was awesome, “a runner’s heart” and while back was screwed, I thankfully I wasn’t dying.

He hadn’t a clue.

Kid2, the social media Facebook queen, never called him. Never text. Tweeted, facebooked, poked, AIMed, skyped. Nothing. She went back to bed. She was tired. 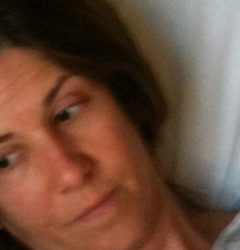 But my husband, got my 4:00 am emergency room, and made it from Richmond, Virginia to my bedside 5 states away in 3 hours to wipe my tears, pluck the hair from my chinny-chin-chin, and become mission command.

He didn’t flinch or leave or hesitate. Except, you know to drive to lacrosse, soccer, grocery stores, school, and carpool. And solicit the town I love to fill in the blanks. Which they did. Because they always do.

It’s a new corporate world out there, and his company, like all companies, are looking for heads to roll. To which he said, “Fuck ’em. I’m not leaving.”

I love this guy. A lot. He makes pretty obtuse kids, but he’s a keeper, without a doubt.

So my ass is broke, my kids rather aloof, but my marriage is good. And that is a Mother’s Day worth celebrating.

An irreverent storyteller with a foul mouth and big heart, Kathryn Mayer (aka Kathy and/or Kate) is a writer, humorist, and (former) activist writing out loud with humor and grace about little life moments with big ripples, including the space between parenting and aging parents, social issues, angsty reflections of midlife, and, sigh, gun humpers. Still. Sometimes a big deal, sometimes not Mayer is a national award-winning columnist, according to the National Society of Newspaper Columnists, and her essays have been recognized as Voice of … END_OF_DOCUMENT_TOKEN_TO_BE_REPLACED