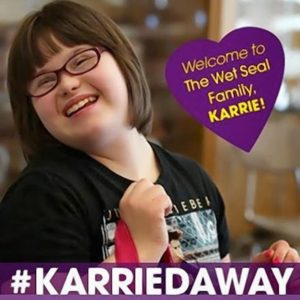 Did you hear what the teen store Wet Seal did for one aspiring model?

They launched the modeling career for one teen with Downs Syndrome and instantly became my very favorite store for clothes I’m too old to wear.

Because that’s what I do: put my money where my values are.

While before Karrie, I never once shopped Wet Seal because of the name alone (ew, really?), I will now encourage the teens in my life to spend their hard earned dollars there because with one amazing act, Wet Seal changed the mindset of “we can’t” to proof that we really and truly can.

Read this and smile all day long, then run to the mall and give Wet Seal all your money for being so incredible. Or at least buy a shirt for someone young and hip in your life. Maybe two.

I used Wet Seal and Karrie to explain to my very pissed off Kid3 the value of her almighty dollar.Kid3 joined Newtown Jr. Action Alliance, a group of teenagers working diligently to end gun violence and using their powerful Newtown voices to enact common sense gun legislation. That’s official speak for kids who have been to enough funerals of dead 7 year-olds to know this is not the world they want to live in and are doing something about it.

So when NAA Jr. recently changed their meeting space to Starbucks, Kid3 wigged. “We spent weeks and weeks boycotting them! They allow guns in Starbucks, why would we ever meet there?” She is now faced with a dilemma of her NAA meeting at Starbucks – STARBUCKS!!! – and this is so not-okay in her view. 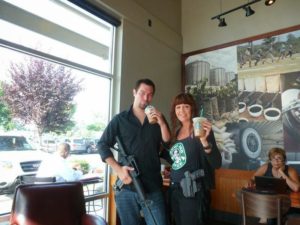 For those not up on current coffee shop gun culture: there’s a no-gun policy at Starbucks corporate headquarters, but customers are allowed to come armed and ready for anything at the corner coffee shop (according to individual state open carry laws). These responsible gun owners have spent the past several months bragging about these said rights, culminating in Starbucks Appreciation Day for gun owners. Newtown’s Starbucks was ground central for an open-carry confrontation back in August. Real nice. Confusing? You bet. Dangerous? Um, well, yeah, guess that depends on your perspective.

I told her Starbucks did eventually listen to those who demanded a safer location for a latte. They responded with a huge change of policy, sort of. And that, darling daughter, is good – really, really good.

They listened to common sense requests. No, they did not outright ban weapons at local stores, but they did formally ask responsible gun owners to please leave their guns at home. This is huge. Huge baby steps that can and will create real change. Newtown Action Alliance is making sure of it.

I explained compromise. And positive reinforcement. And reward of capitalism. Kind of like parenting except with money.

So go, I told her. Spend your money at Starbucks to thank them for listening and acting. Reward them with your hard-earned dollars and bring your friends.

Just like Wet Seal; they didn’t just talk about it making this young woman a model. They did something, and changed a life by doing so. They very well may have started a movement to create a long-lasting cultural shift away from discrimination to embrace kindness and acceptance, we’ll have to wait to see. Not bad message to come from a teen clothing store. Choose to spend your money there.

Change has to start somewhere. Whether little tiny steps or great big decisions. But to do nothing is not an option.

An irreverent storyteller with a foul mouth and big heart, Kathryn Mayer (aka Kathy and/or Kate) is a writer, humorist, and (former) activist writing out loud with humor and grace about little life moments with big ripples, including the space between parenting and aging parents, social issues, angsty reflections of midlife, and, sigh, gun humpers. Still. Sometimes a big deal, sometimes not Mayer is a national award-winning columnist, according to the National Society of Newspaper Columnists, and her essays have been recognized as Voice of … END_OF_DOCUMENT_TOKEN_TO_BE_REPLACED