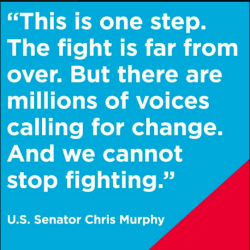 What can you do to help change the world? (I have video of yours truly demonstrating what to do and how to do it below.)

In the venn diagram of Kate, the outrage of people outside my Newtown bubble is amazing, with people calling Congress, sending emails, posting, and tweeting.

Non-newtowners, non-GVPers. Regular people who are starting to get it.

Starting to realize that without action, our story might very well become your story.

And nobody wants that to happen.

I received many texts and DMs and posts after the Orlando shooting from people I didn’t even know were paying attention to my teeny tiny contribution to GVP, asking about our Newtown community, our Sandy Hook friends and neighbors.

FYI: GVP = gun violence prevention. Because gun control gets all the gun humpers panties in a knot, and we can’t have that.

People from camp, vacation, writing, college, high school, work have all reached out.

“you okay Kate?” “Thinking of you and Newtown.” “I hope your dealing with this week okay.” “Thank you for all your work, I’m sorry this keeps happening.” “Did you see the news? Are you okay?” “The world is fucked. Nothing will ever change.”  “I’m in. What can I do to help?”

Bi-partisan pissed-offedness is a powerful tool.

Here’s how I responded to every one who reached out:

We are broken. But we fixable. I see it every day, state by state, community by community. We will fix this. We are fixing this.

It’s the ripple effect and fuck yea, we will change the course and create kinder, safer communities. Fuck yea we will.

The above was written before Senator Chris Murphy took the senate floor and refused to behave like a rookie Senator and instead filibustered his way to a vote. I had this in draft form, waiting to post, but then Chris Murphy happened and holy CSPAN batman! (follow #filibuster and me on twitter for some fun stuff)

Whudda thunk an ivy-league Connecticut dude would be such a badass rockstar?

He’s about one Red Bull away from gauging his ears and joining a band, but we need him in DC, so it’ll have to wait. Now there’s work to do.

Murphy filibustered, got the vote for gun violence prevention, and yay or nay, we must keep up the pressure for Congress to vote — and vote the right way. Because doing nothing is not an option, and complacency is acceptance and 30,000 people are shot DEAD every year and this cannot be okay with the GOP, the NRA, or anyone with a soul and a conscience who calls this the land of the free and the home of the brave.

WHAT YOU CAN DO TO CHANGE GUN LEGISLATION:

Many people have never called congress before, and that’s okay.

Here’s what to expect when asked to text a message to a number:

Just like a text message, type in 877-877 like you’re sending a text to your  mom, except instead of “mom” type in 877877. Then text to that number, as a message: “terror gap” no quotations. This is to the Brady Campaign, they will text you back to enter your zip code to identify your Senator. Then you will automatically be connected to your senator via a phone call.

Do not panic. (example below)

The call will 99% go to voice mail, and 1% be answered by a legislative aide (a recent college grad assigned to answering phones. Picture my own daughters answering the phones, except with better manners. Sometimes but not always.)

Leave a message. They must by law account for all messages.

We must flood Congress with phone calls. Remember this number and call it: Capitol Switchboard number: 202-224-3121. Or use the handy-dandy text tool.

If by chance your Senator is 100% on board as are mine (Murphy & Blumenthal & Esty), thank them. This is no easy feat. Or, you might be connected to another senator or representative who might need to hear from you, as I was below.

Call your reps, call your senators, and let them know you are watching and listening and paying attention. And you will respond accordingly in November. Cuz that’s where the rubber meets the road.

Do this. Do something. Silence is not acceptable.

There will be a vote, and it may fail, then there will be another, and that may fail too, but there is always a chance to right a wrong. Let’s work hard together to close the Terror Gap and support universal background checks on all gun sales, and get weapons of mass dustruction out of the hands of weekend warriors looking for a fight.

This is not brain surgery, not infringing on anyone’s rights, except for the rights of having no checks and balances at all.

If we say nothing, we say it’s okay and can’t be surprised when there’s another vigil for another atrocity because those in charge decided money is more important than people, and we the people let them.

An irreverent storyteller with a foul mouth and big heart, Kathryn Mayer (aka Kathy and/or Kate) is a writer, humorist, and (former) activist writing out loud with humor and grace about little life moments with big ripples, including the space between parenting and aging parents, social issues, angsty reflections of midlife, and, sigh, gun humpers. Still. Sometimes a big deal, sometimes not Mayer is a national award-winning columnist, according to the National Society of Newspaper Columnists, and her essays have been recognized as Voice of … END_OF_DOCUMENT_TOKEN_TO_BE_REPLACED