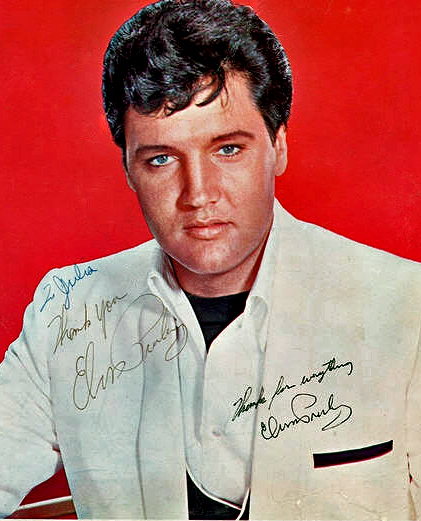 The year Elvis died, without asking I got a baby blue t-shirt with a stupid feminist slogan, from a cheesy tourist shop on a rundown boardwalk in Maine that sold thousands of useless things to families that couldn’t afford them.

Make no mistake about it: I didn’t want it. My parents wanted me to have it, their oldest daughter, and a funny t-shirt that nobody thought was funny except for them. I would have never asked for that stupid shirt.

Next to the register, rock-candy lollipops competed with a basket of popular white braided rope bracelets. Everyone who was anyone in middle school had a white rope bracelet after summer vacation; the kind you put on once and they would shrink and hug your wrist, turn nasty and dingy, and never ever come off until your mom cut them off in disgusted exasperation.

“A rope bracelet, please, can I can I can I,” I begged, but my parents didn’t bite. They never did. Instead, they muted my pleas, mesmerized by the cacophony of t-shirts, pinned to the ceiling and billowing down like old pillow cases offering inappropriate slogans I didn’t get but pretended to, although I did recognize curse words, a pot leaf, and some middle fingers, and was embarrassed my parents did too.

Before I knew it, they were ordering a custom made shirt – for me. They thought it was perfect and forked over the cash before I even knew what had happened.

It was baby blue – my very least favorite color, and had stupid shiny decal letters pressed in place with a monster iron that seethed a cloud burst of angry steam that said exactly this:

A woman’s place is in the house…

“Duh, it’s not even funny. It’s so stupid,” I begged instead for the pukashell necklace or white rope bracelet. But I was 12 and on family vacation and had no choice where we went or what we did, even though I was nearly a teenager 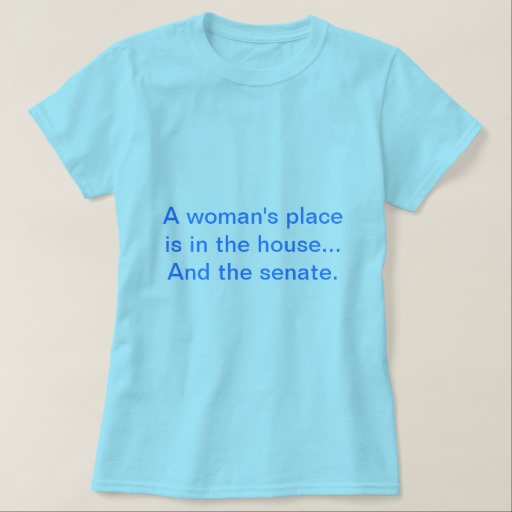 and told them so with evil eye rolls and the silent treatment.

Mom paid for a baby blue girl’s tee, my size, with shiny iridescent rounded letters, and dad carried the shirt folded flat on his massive palms like it was the crown jewels, careful, like the saleslady told him, so the letters wouldn’t peel off before they cooled.

We left the t-shirt shack, Mom and Dad first, my sisters bouncing between them with rock candy swizzle sticks, and me sulking, dragging my feet, miserable as usual.

When they had had enough of my attitude, they spelled it out for me, even though I couldn’t care less. Stupid family. Stupid vacation. Stupid shirt.

House, Senate, Judiciary, Legislative. Men, women. Women’s rights. Feminism. More men than women. Actually, few women, if any. It was white noise to my 12-year-old self in 1977. I just didn’t care.

My parents explained that many people – if not most – believed women belonged in the house, like at home in our house, making babies, taking care of kids, cooking, cleaning, doing laundry. That was a woman’s job. A mom’s job. Their only job.

Girls were told what they could be? Huh?

I didn’t get it. It wasn’t the house I grew up in. It wasn’t the message me or my three little sisters were getting; not from them. Not from anyone; not yet.

There was apparently quite a difference in what boys and girls could do, that I hadn’t learned yet. We were a house of all girls, and my best friend, my cousin, was a boy just one year older than me, and we grew up together running wild and free, very little restrictions, very few limitations.

It wasn’t any world I knew in all of my 12 years, I argued, but mom and dad had had enough. They said with their not-another-word voice: Conversation over. Don’t argue with us, they said. Wear the shirt to school, they said. Your teacher will love it, they smiled. You’ll understand later, they said.

I didn’t know when later was, and I wasn’t willing to wait.

Back home, I shoved that shirt deep into a drawer, not caring if the letters peeled off, and I can see it there perfectly, in my mind’s eye, wadded up and pushed back-back-back, buried under other back-to-school clothes someone thought a good idea, but I wouldn’t be caught dead in.

I so wish I had that feminist t-shirt now.

I don’t care what you think of Hillary. I really don’t. I don’t even care what you think of Michelle or Pelosi or Elizabeth Warren or even Palin. Personally I wish with all my heart Geraldine Ferraro were alive to witness what is happening before our very eyes, these do you remember when moments we will tell our grandchildren about – can you even believe it, a woman nominated to run for President of the United States.

That wasn’t on the t-shirt. Just House. And Senate. White House was apparently too much of a stretch, even for satirical t-shirt shops and progressive parents pushing for a fairer world.

That little girl couldn’t know how smart her parents were, raising a family not by saying but by doing, so she found such a shirt ridiculous, and embarrassing, and stupid, like any 12-year-old who believed invincibly she could be anything she wanted to be, because she didn’t know then the road had not yet been paved.

There is no photographic proof; how I wish there was.

I wish we had a picture of me, in that shirt, on that dirty boardwalk with Elvis music blasting over the waves breaking on the beach. I can still smell the ocean, the French fries, the cotton candy. I wish I had put on that shirt right away, and stood defiant with my Dorothy Hamill wedge, hands on my hips, not in a mopey, my parents made me wear this sort of way, but in a badass fuck yea, get out of my way, we’re going to the White House and ain’t nobody gonna stop us, with a defiant, sassy, tom boy, tough girl attitude that I hadn’t yet learned to muzzle.

Sometimes a t-shirt is a painless political punch thrown by parents smart enough to push their daughter in the ring, even if only realized some 40 years later.

An irreverent storyteller with a foul mouth and big heart, Kathryn Mayer (aka Kathy and/or Kate) is a writer, humorist, and (former) activist writing out loud with humor and grace about little life moments with big ripples, including the space between parenting and aging parents, social issues, angsty reflections of midlife, and, sigh, gun humpers. Still. Sometimes a big deal, sometimes not Mayer is a national award-winning columnist, according to the National Society of Newspaper Columnists, and her essays have been recognized as Voice of … END_OF_DOCUMENT_TOKEN_TO_BE_REPLACED