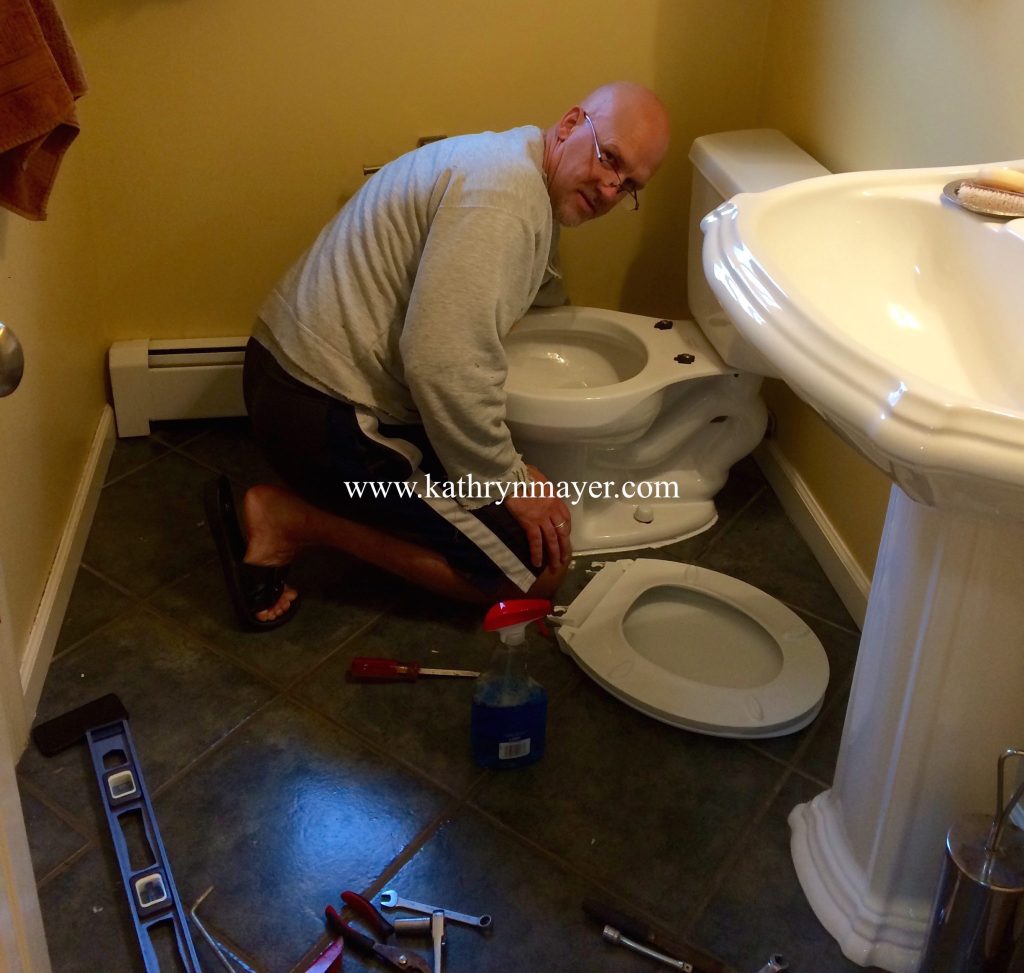 How did it happen? Why is that what every wants to know?

Easy enough, I suppose. But TMI? Iphone was in sweatshirt front pocket. I sit, pee, wipe, reach around and flush, stand, pull up pants, turn towards sink and – kerplop! Before my eyes found the bottom of the bowl, a swirl sucked up something, and that something was my cell phone.

Or so I thought.

I emailed the rather attractive husband and he informed his technically challenged writer wife that he could call me via my laptop! Oooh, technology is so cool! And the lap-top rings, but what’s that? Another vibration from somewhere in the house, so I tell him, keep calling, I think my phone is upstairs. Musta flushed my glasses.

But the sound was not coming from upstairs. Or downstairs.

It was coming from the bathroom, the toilet to be precise, proving all was not loss, and the phone was on vibrate.

And so it was alive. Still, vibrating away in the shitter like a potty prisoner.

Rather attractive husband to the potty party rescue:

Potty sloshing he made his way out to the back, looking for a Christmas miracle and a sledge-hammer.

Thankfully, our Boy brought up a rubber mallet and not a sledgehammer, which saved the potty porcelain from a shock and awe rescue attempt.

And so after 15 hours of labor, the phone was born and immediately Lysoled and Purelled, then nestled deep into a bowl of rice. Before long, the battery was charged, and the texts started coming in.

It was alive, and the entire town knew about it. I posted the play-by-play on the rather-attractive-husband’s FB page and lo and behold, when he walked into Newtown Hardware, the maroon shirted clones said:

Didn’t even have to ask. He was stopped in the grocery store and asked about the videos. At the dump. At the gas station. At Dunkin. At the boy’s basketball game.

My potty phone made him famous, my cheapness made him cringe.

The phone worked well enough, but the screen had a post-potty hangover fog. But it worked, and being the holiday season, I was not willing to shell out $300 for a non-foggy phone when potty phone worked good enough. Christmas was coming and we had gifts to buy.

I decided to keep it, potty fog and all, and we went out to dinner to celebrate. Driving into the restaurant, my heart sank as I saw old friends who were sadly no longer friends: a couple who doesn’t find me as friendly and funny as others might. It happens.

RAH: “Bullshit. The only people judging are if you put your nasty-ass phone on the table. The entire town knows you flushed it, and nobody’s gonna want to see it. You’ll get judged all right, and you’ll deserve it. Leave it in the car. Because ew. Let’s go eat.”

And so we did. And it was delicious. And four tables asked about the iphone, plus the owners, and the bartender bought us a round, but funny, nobody wanted to see that it still worked.

UPDATE: This happened one year ago, and I only just recently got a new phone. While my phone survived being flushed and the 11 months that followed, it did not survive being thrown against the concrete garage wall almost a year later. Anger management needed. My current phone is pee and poop free, for now, so if you see me about town, no e coli worries. Not this time.

*
NaBloPoMo National Blog Posting Month. Thanks for reading and sharing. Please excuse typos and bad links. It’s about consistency over quality. Thanks for understanding.

An irreverent storyteller with a foul mouth and big heart, Kathryn Mayer (aka Kathy and/or Kate) is a writer, humorist, and (former) activist writing out loud with humor and grace about little life moments with big ripples, including the space between parenting and aging parents, social issues, angsty reflections of midlife, and, sigh, gun humpers. Still. Sometimes a big deal, sometimes not Mayer is a national award-winning columnist, according to the National Society of Newspaper Columnists, and her essays have been recognized as Voice of … END_OF_DOCUMENT_TOKEN_TO_BE_REPLACED