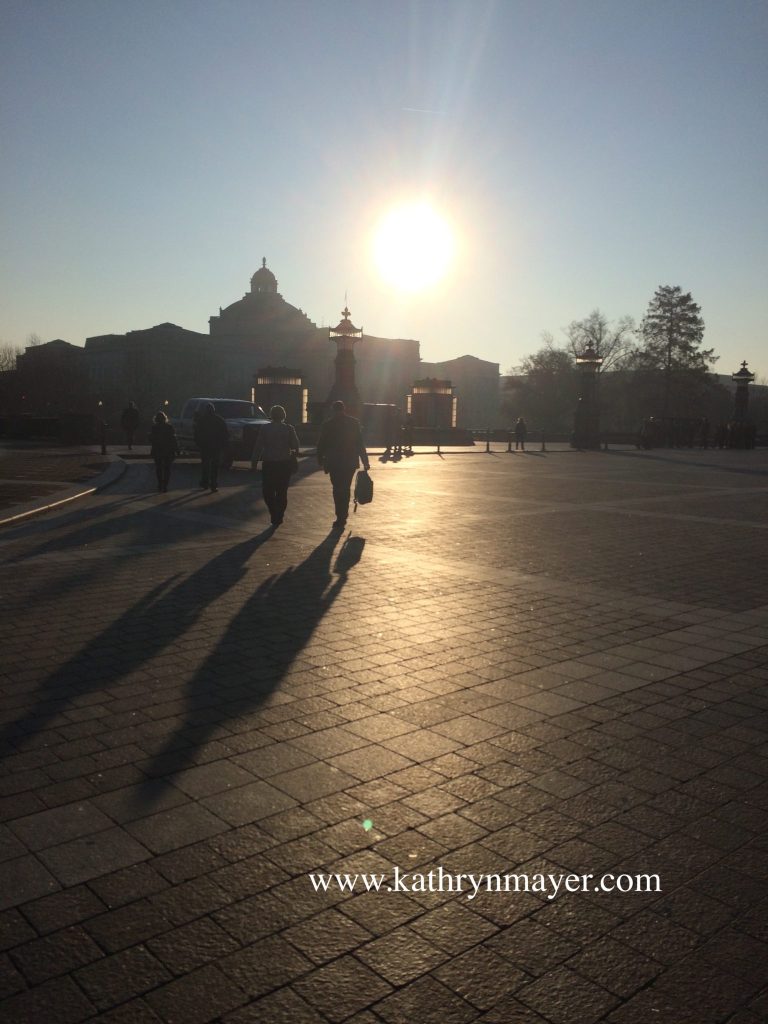 Last year, I attended the Newtown Action Alliance/Newtown Foundation national vigil and lobby day to help families of gun violence victims honor with action. It was my first time in DC lobbying to end gun violence, and I was nervous about what to do and how to do it.

I shouldn’t have been.

All I had to do was be a friendly face amongst a hundred other friendly faces. And sometimes, but not often, a polite interrupter. I’m good at that.

The Newtown Foundation National Vigil for All Victims of Gun Violence is December 14th, the 4th anniversary of the Sandy Hook shooting that decimated so many families in the town I call home. The National Vigil was established to shed light on the epidemic of gun violence in our country, provide love and support to victim’s families, and empower people to honor with action.

The Vigil, December 14th at St. Mark’s Episcopal Church on Capital Hill, is a peaceful, beautiful ceremony that families look forward to, for national acknowledgement of their personal loss. There they discover they are not alone, and find comfort in a cathedral filled with love and support, compassion and kindness, grace and honor. 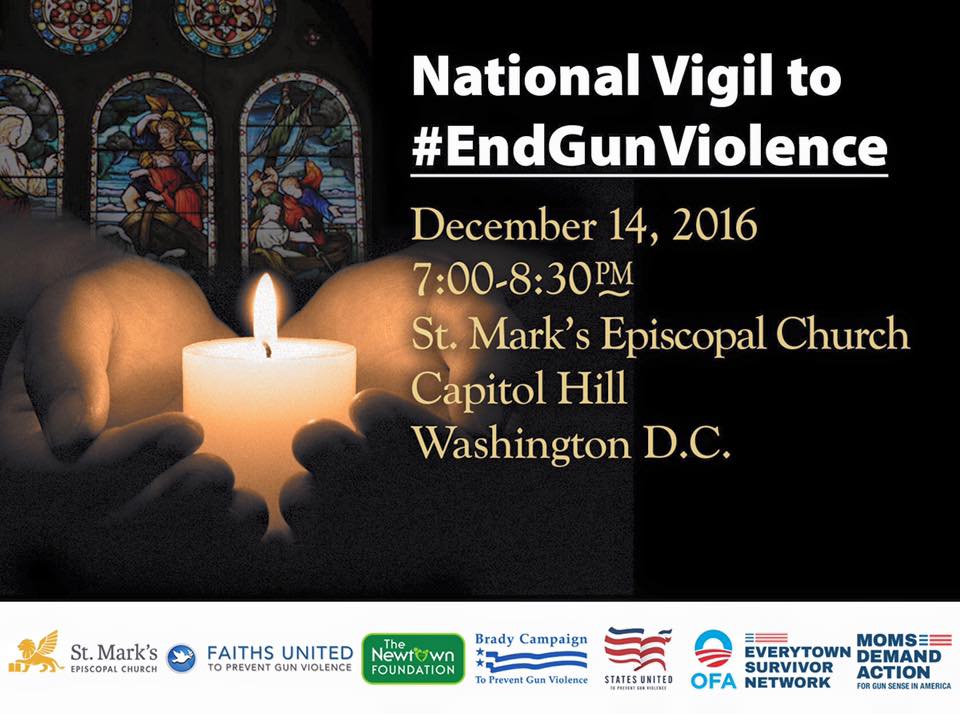 But that’s not why I go.

I’m selfish. And a nobody. I attend because there is an immediate return on investment. Hopes and prayers are needed, and healing is ever-present in the moving and emotional vigil, but what is also available is an immediate sense of connection, accomplishment, and action.

You feel good: not sad, not defeated, not ignored. Strong, powerful, effective.

We could all use a little more of that, doncha think?

The National Vigil and Newtown Action Alliance lobby day is a tangible effort to give people face time with the Congress that represents them.

It’s a lesson in civics and civility, for the volunteers like me, for the families, and I like to think for the government aides we meet with. 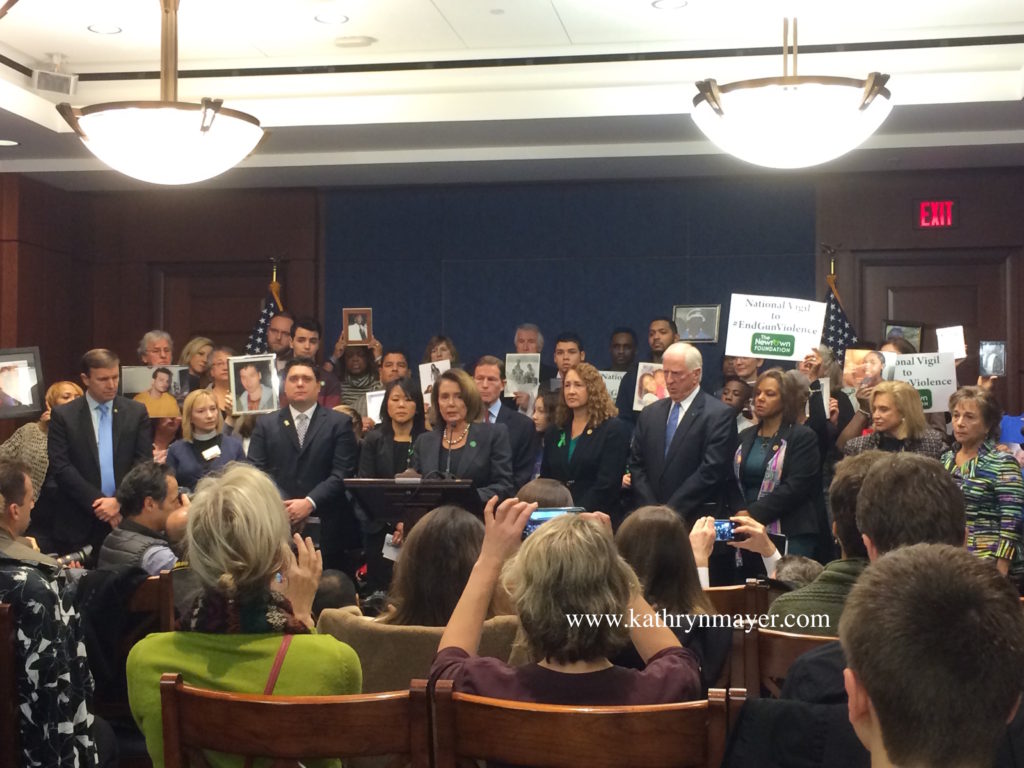 Learn how easy it is to connect with VIP Congress

• Learn exactly how the halls of Congress work, and don’t work, and what happens at the other end of the phone when you make those all important calls.

• See faces of the people who represent you, connect with aides who deliver messages (most of whom are my kids’ ages)

• Experience how stories are the most powerful tool we have to connect people and create change.

Now more than ever.

The next president is an NRA-sponsored, endorsed, revered, and worshipped president-elect, and the rabid 2a lobby is counting on us going away. Giving up. Moving on.

But that’s not going to happen. There’s too much to lose. 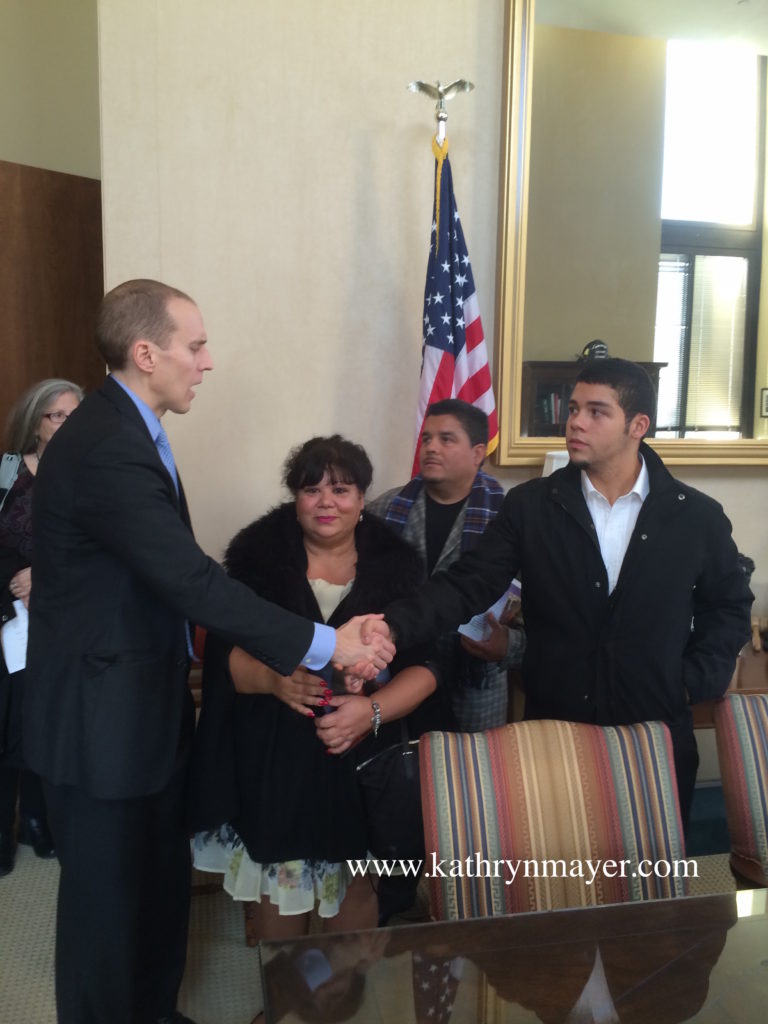 Think about attending. You won’t regret it. It’s an inspiring, empowering, life-changing event. I’ve attended many advocacy outreach events, and this is by far the best organized and most effective. I met amazing people, saw how the government works, laughed more than you could ever imagine, and felt like I actually made a difference.

Gun violence does not discriminate

When you work to end gun violence, there’s well-deserved tension between the white mass shootings that get plenty of air time and media play and playgrounds built, and the dead victims of color who barely make the evening news.

This is not right, but it is fact. And not for nothing, with the racist-in-chief-elect, that’s only going to get so much worse. It already has.

But the National Vigil and coinciding lobby day connects all people, regardless of color, with the means and meetings to tell their stories to people in power so everyone’s voice is heard.

My job? I’m the friendly face escorting these brave and powerful families to and from fancy offices they are paying for. We hug a lot, laugh even more, offer small bits of encouragement as needed, on how the Senate actually works for them, not the other way around.

The Newtown Foundation/Newtown Action Alliance does an awesome job of organizing and coordinating. All I had to do was show up, meet my people, and head to the hill, with the scores of other volunteers and their assigned families.

Here’s how it went:

“Hi, I’m Kathy from Newtown CT, and I want you to meet your constituents, the Cabrera family.” 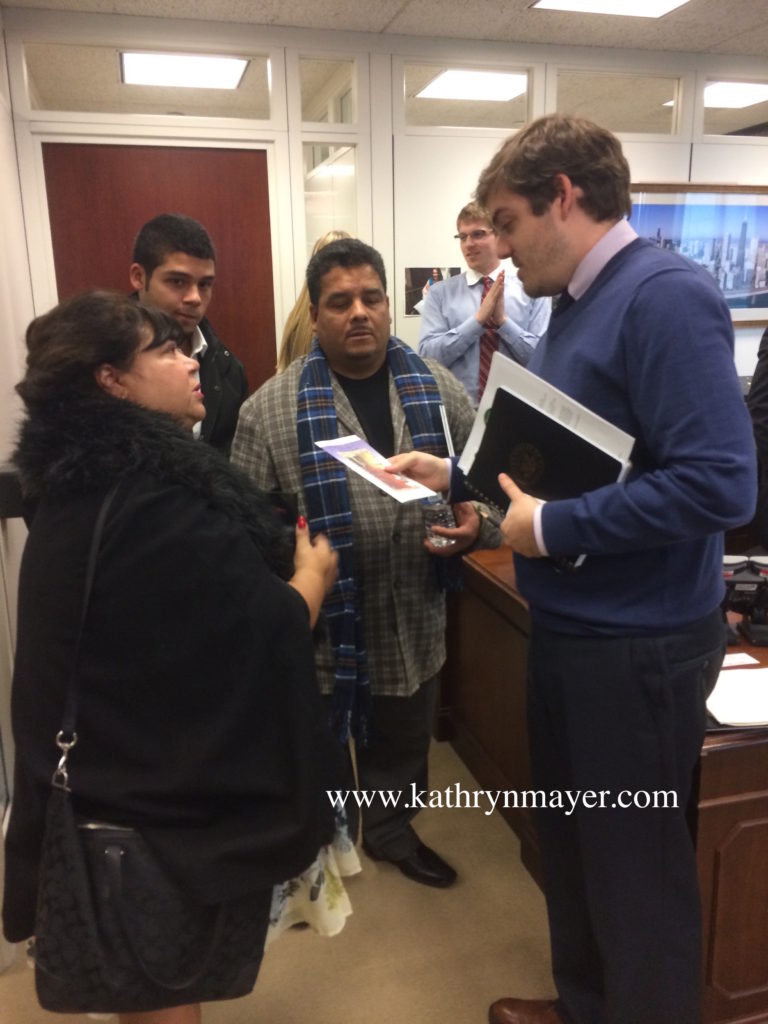 Then I watched, in front of my very eyes, high schooler Anthony speak quietly and eloquently and mesmerize his audience, his mom and dad included. He had never spoken about his sister before, but he did that day. He left DC a changed person. He truly did #HonorWithAction. Afterwards, I became Facebook friends with his mom, and watched him via his proud mama’s posts, become a vocal advocate not just in his school, but his city, and state.

My next people were a dynamic duo from South Carolina, Melanie and Bonnie, two women warriors, both veterans and polished activists, with separate stories but shared representatives so we tag teamed. They taught me so much about focusing the conversation, being friendly and jovial, and firm and persistent.

Plus, Bonnie is a hoot and wasn’t taking no shit from nobody. 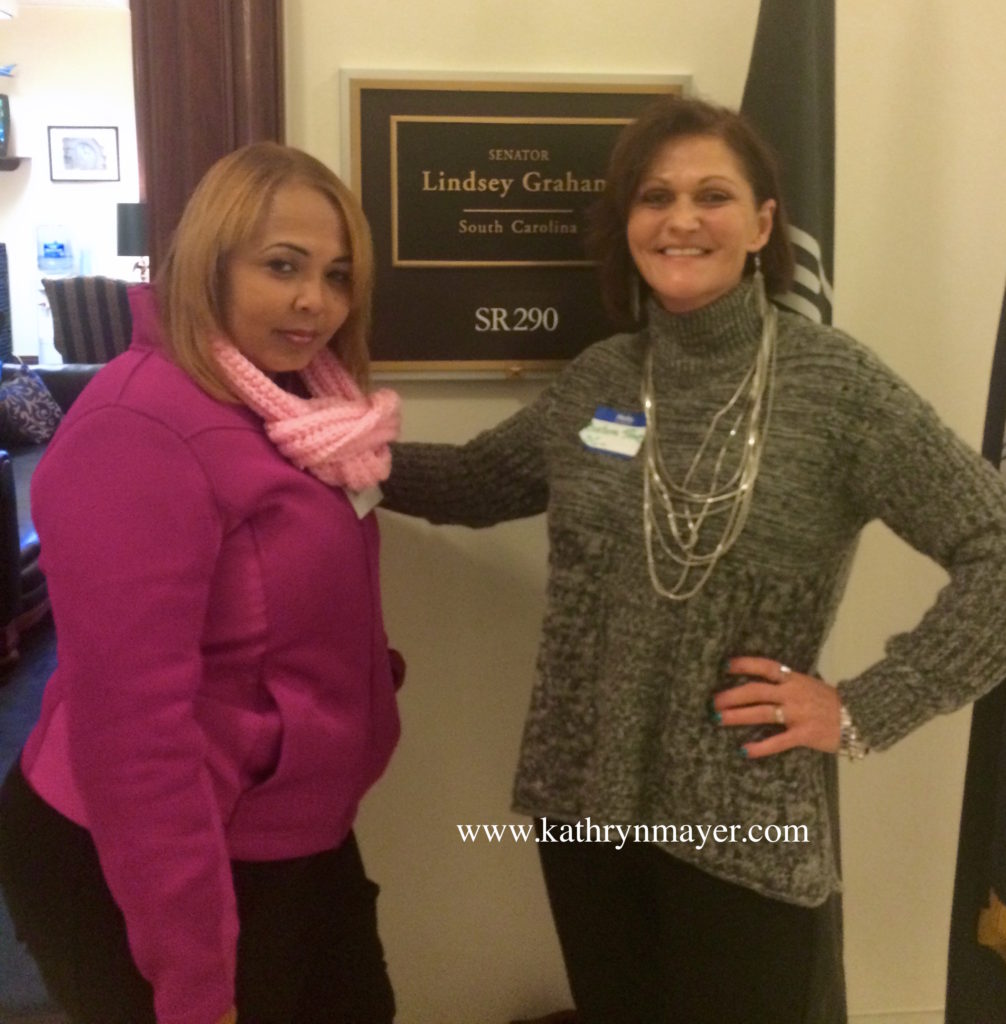 In Senator Lindsey Graham’s meeting, (you never see the actual senator, they ALWAYS send a minion in their place, a very powerful minion), I made the aide pinky promise he would deliver Melanie and Bonnie’s message directly to Senator Graham. I have no way of knowing if he did or didn’t, but regardless, I looked him in the eye and locked pinkies, and told him to promise.

He said he never pinky-promised a constituent before.

I bet he’ll remember me when I go back next time.

PS: Locals: There is a bus from Newtown to DC, with limited seats still available as of this posting.

Safety pins to the rescue, or just another feel good moment for white people?
How to hold writers and other humans accountable to their goals

An irreverent storyteller with a foul mouth and big heart, Kathryn Mayer (aka Kathy and/or Kate) is a writer, humorist, and (former) activist writing out loud with humor and grace about little life moments with big ripples, including the space between parenting and aging parents, social issues, angsty reflections of midlife, and, sigh, gun humpers. Still. Sometimes a big deal, sometimes not Mayer is a national award-winning columnist, according to the National Society of Newspaper Columnists, and her essays have been recognized as Voice of … END_OF_DOCUMENT_TOKEN_TO_BE_REPLACED