Except maybe a black man, because, well, you know, times are a bit tough for the black man today. And yesterday. And tomorrow. Especially tomorrow, with the mostest mediocre white-ish orangeman of all deciding what’s what, and which lives matter.

But if I could be a man for just one week, any mediocre, middle-aged white man, man-oh-man, the fruits of our testosterone laden society would rain down upon me and I would dance in the streets.

The benefits of being a mediocre white man

I would get my shirts drycleaned for $1.49, because, despite my insistence the shirt is really a man’s, the clerk mansplains to me again and again: “As I told you before lady, not my decision. The form isn’t made for a blouse. This is a blouse. A lady’s blouse. This is $4.99.”

I would apply for jobs not qualified for and get pissed I wasn’t considered, blaming it on the hiring manager instead of my own inequities.

I would submit writing to publications far outside my reach and follow-up relentlessly for a publication date, and if rejected, mansplain the editor on why she’s made a yuge mistake. Bigly. 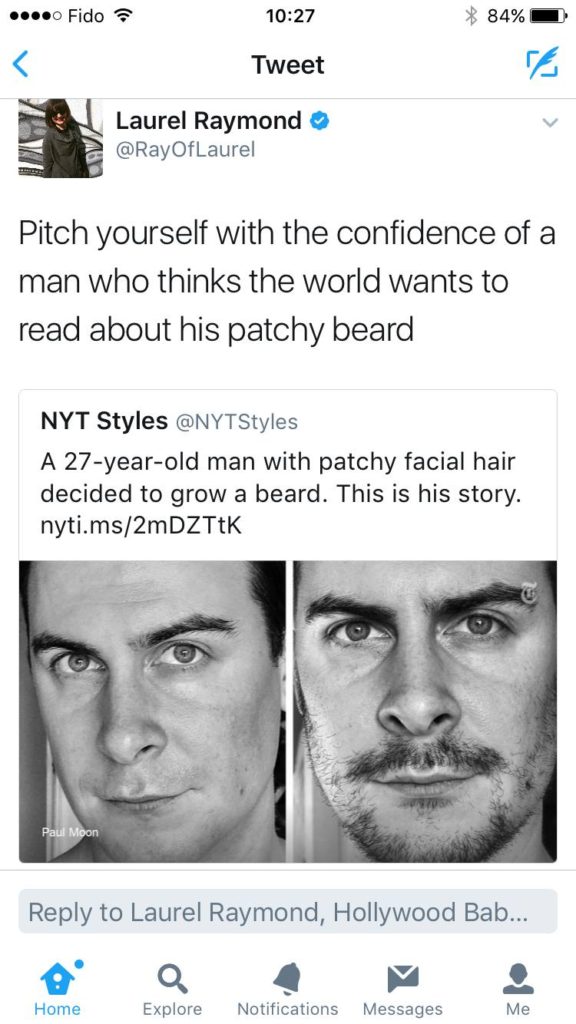 I would attend parent-teacher conferences under a barrage of praise and gratitude from teachers and administrators, thanking me profusely for taking time from my very busy schedule to come all the way to school. Sure, I would look at my wife with apologetic eyes, but I would love every minute of the undeserved accolades, after said wife reminded me which kid was in which class, and who these people were sitting in tiny desks and tiny chairs.

Groceries would magically appear in the fridge, pantry, and toilet paper on the roll, soap in the shower, Bounce sheets on the dryer – without the pesky middleman – yes, man – of Costco, the grocery store, Duane Read, CVS, or Walgreens.

If I were a man, my receding hairline and thickening middle and saggy breasts would be splattered on small screens, big screens, and multiplexes nationwide, instead of being shelved for a younger, firmer version of who I used to be.

If I could be a man for one week, I could stink-eye a coach at a kid’s sports game over a bad play and get the reassuring male-head-nod about a call gone wrong, instead of the creepy – ew, did he just do that? – wink like I’m a swinger and was eyeballing his obvious above-average athletic prowess.

If I were a man, I could burp loudly, fart proudly, scratch my nuts, and snore and drool with no ridicule, no laugh track necessary. It wouldn’t be funny. It would just be.

If I were a man, I could believe in Santa. Magically gifts would appear as if by elves – male no less – on Christmas Eve, and as the man of the house, I would magically place them under the tree and admire a job well done.

I want to say that.

If I were a man, tampons would stay forever in suitcases of vacations long forgotten, ne’er to be touched because, well ew. I would abhor all things vaginal, except for, of course, vaginas.

Feminine care would be “not my job.” Unless of course, forced into action, I would don a cape and super hero bravado and come to the rescue, then remind her, over and over again for years, of that one time.

Women’s healthcare, however, would be my job, and only my job, to decide what is right, wrong, legal, illegal for women, because they, of course, cannot make such bigly decisions without me.

If I were a man, maybe the future of media would look like me:

Proud to be part of this team. @CaseyNeistat @Bourdain @jaketapper @wkamaubell and @CNN chief Zucker pic.twitter.com/B7enhLXqYd

If I were a man, there would be shorter lines to pee and I could do so without precariously balancing above the public petri dish, my quads screaming in pain, purse looped around neck, swinging, swinging, neck arching upward to keep it just above the piss laden floor.

If I were a man, I could sneeze and laugh without fear.

Work with confidence and security and creativity and be paid for doing so.

Not wonder why my co-star/partner/lover was far younger than my daughter.

Take my kids to the park/show/game/store/pediatrician and be told what an extraordinary man I was for doing so. Taking time outta my very busy day for such mundane task as caring for my very own children. Even though it’s the very same job women do every day, but nobody, anywhere, noticed.

Ahh, if I could only be a mediocre white man. For a day. Just one.

An irreverent storyteller with a foul mouth and big heart, Kathryn Mayer (aka Kathy and/or Kate) is a writer, humorist, and (former) activist writing out loud with humor and grace about little life moments with big ripples, including the space between parenting and aging parents, social issues, angsty reflections of midlife, and, sigh, gun humpers. Still. Sometimes a big deal, sometimes not Mayer is a national award-winning columnist, according to the National Society of Newspaper Columnists, and her essays have been recognized as Voice of … END_OF_DOCUMENT_TOKEN_TO_BE_REPLACED