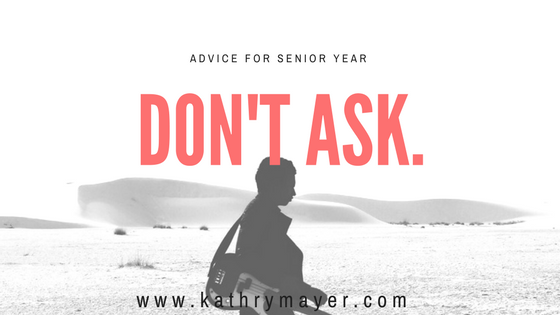 Oh, ’tis the season of senior year, when college acceptances come in the form of exciting emails with pomp and circumstance and virtual confetti, and big fat envelopes jammed into old school mailboxes.

Proud parents post their boast about overachieving spawn’s ability to get into the college of their dreams and receive an umpteen million dollar scholarship. Parents often don’t mention they shelled out thousands (read THOUSANDS) of dollars to have a college application coach – cough cough – advise and guide their little darling through the process. I wish I were joking.

Here’s the thing about high school seniors in leafy suburbs where the grass is always greener is played out on social media and in the aisles of a grocery store and on soccer sidelines with voices too loud, too proud, too public.

Well meaning friends, neighbors, and casual observers should keep their big fat mouths shut unless the topic is brought up by the high schooler or pregnant woman. (Really, really hope they’re not one in the same, because … condoms.)

High school seniors and pregnant women have much in common.

Unless you actually see the head emerging from the cervix, don’t ask when the baby is due. Take it from me, when holding said infant in my arms, the friendly neighborhood deli guy asked when the baby was due.

“What baby?” I seeth, hiking the oversized oaf onto my other hip. “He’s here, jackass. RIGHT HERE. This is the baby. This is the stomach that carried this baby. Can’t photoshop real life jackass, so a Cubano with extra pickles, please, and thankyouverymuch.”

Ditto with the high school seniors.

Unless the high school kid offers up his or her plans for college or whatever – and there’s a lot of whatever – don’t ask.

Not everybody’s on the same game plan, and the pressure to keep up with the joneses in leafy suburbia is unbearable – for the moms and dads, and especially for the kids.

At end-of-the-year orchestra back with Kid1, each graduating senior stood up and announced where they’re going next year to an audience of oooohs and ahhhhhs. One boy, a cellist, stood up and announced confidently he was deciding between the Coast Guard Academy or perhaps Berkley, waitlisted at some Ivys, just hadn’t decided quite yet. The director kinda cut him off, so I asked my own cellist, just a freshman and I the young mom in the sea of much, much older high school parents, about this extraordinary human, she told me:

“Brendan? Lied; made it all up. Teacher was soooo mad, but he’s sick of it. Sick of everybody.”

Duly noted, and four and a half kids later, this stays with me.

Or how I often put it:

Don’t get caught up in the Bucknell BC bullshit: sage advice for senior year

They all get there. Eventually. When I worried about what all the other parents said about potty training all those kids ago, my pediatrician said, another gem I held on to all these years:

Growing up isn’t easy, and this graduation part is scary and exciting and really scary, so chill the eff out and let’s not make it any harder than it has to be. Not for the parents, and especially not for the kids.

And also, I’m not pregnant, just fat. And the baby is now a senior and trying to figure it out so just give us both a break.

Also, no offense Bucknell and BC.

An irreverent storyteller with a foul mouth and big heart, Kathryn Mayer (aka Kathy and/or Kate) is a writer, humorist, and (former) activist writing out loud with humor and grace about little life moments with big ripples, including the space between parenting and aging parents, social issues, angsty reflections of midlife, and, sigh, gun humpers. Still. Sometimes a big deal, sometimes not Mayer is a national award-winning columnist, according to the National Society of Newspaper Columnists, and her essays have been recognized as Voice of … END_OF_DOCUMENT_TOKEN_TO_BE_REPLACED