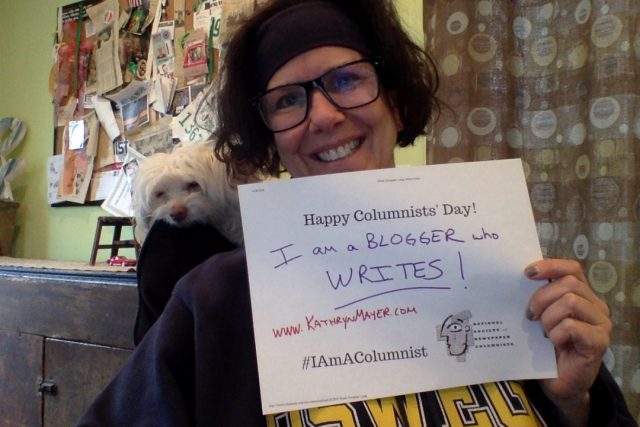 Fight or flight? I chose flight after a fight with my rather attractive pain-in-the-ass husband and flew to Cincinnati.

Just for the weekend, but that’s why I left for the National Society for Newspaper Columnists writing conference. In Cincinnati. For the weekend.

That, and I was an invited guest. For reals.

A couple months back, I was informed I would receive some level of recognition – yet to be determined – at NSNC awards banquet in Cincinnati.

Me. I was thrilled to make the cut, but had no intention of attending, as the last kid’s last sports season and playoffs and didn’t want to miss a second of turf time.

Then high school lax lost, and season and my career of 20 odd years of bleacher ass was forced into retirement, so I immediately registered for the conference, in Cincinnati, but it sold out so I was outta time and outta luck. No room for me. Bleacher ass and all.

However, as a nominated finalist, all was not lost. I could still eat.

I was invited to attend awards banquet, so after the aforementioned fight with my rather-attractive-pain-in-the-ass husband, I left on a jet plane to Cincinnati thanks to cheap flight and cheaper hotel because lacrosse lost and I could.

A writer walked into a bar

I didn’t know a soul, but forced myself into an awkward meet ‘n greet at the bar with another nominee who, he too, just showed up for the awards, who happens to be an physician and popular speaker who gets $5-7 grand per speaking engagement – when he has time, because he is a doctor – and has over a million views – “OVER a million, easily” – on his columns – at the very least – and shared this with the bravado only a middle-aged white man can – and, oh yeah, this: he 100% supports the NRA and in no way is it a terrorist organization and just what do I mean when I say ban assault weapons because, “honey, you really should refrain from talking about guns until you know a little something about guns.”

Or something like that. Couldn’t hear him mansplain that clearly with all that ego suffocating my ear canals.

Perhaps I should have stayed home and fought with my husband.

Instead, I got my drink to go, left a big fat tip for the unfortunate bartender, bid a fond, fuck-you-adieu to the overpaid barfly, and wandered into the banquet hall where I found myself surrounded by real live newspaper people, writers from all over the country – Michigan, Texas, Maine, California, Rhode Island – Ohio-Ohio-Ohio (and Kentucky) – all getting paid to tell stories, in tiny towns and big ass urban cities, from sea to shining sea.

Now, more than ever, is the time to write what is wrong

Pulitzer prize-winning columnist Connie Schultz took to the stage to deliver her 2018 Ernie Pyle Lifetime Achievement Award keynote and was unapologetic about using words to reveal injustice, fight atrocities, give voice to the marginalized, and promote the powerless. Give the woman a cape. And a keyboard. 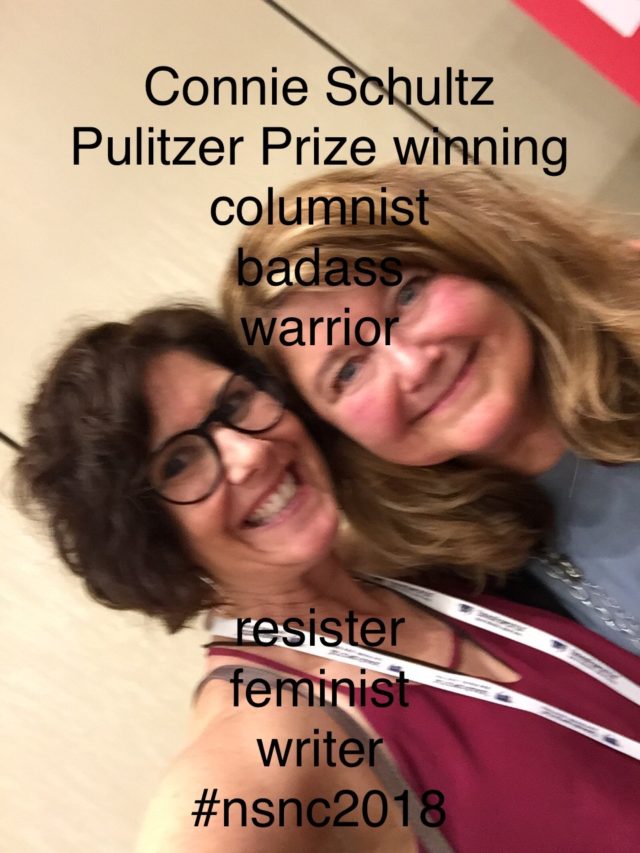 “I won’t stop until every paper in America refuses to publish me.”

And I felt better about the world, and also giving the side-eye to the aforementioned NRA barfly.

Then the moment arrived, and knowing I won something, honorable mention at the very least, was very honorable indeed.

The winners were announced by circulation, larger markets writing words and ideas for the likes of The Boston Globe, USA Today, and Chicago Sun Times, Philadelphia, New York Times – in-print and online with circulation way bigger than just my mother, and her friends. 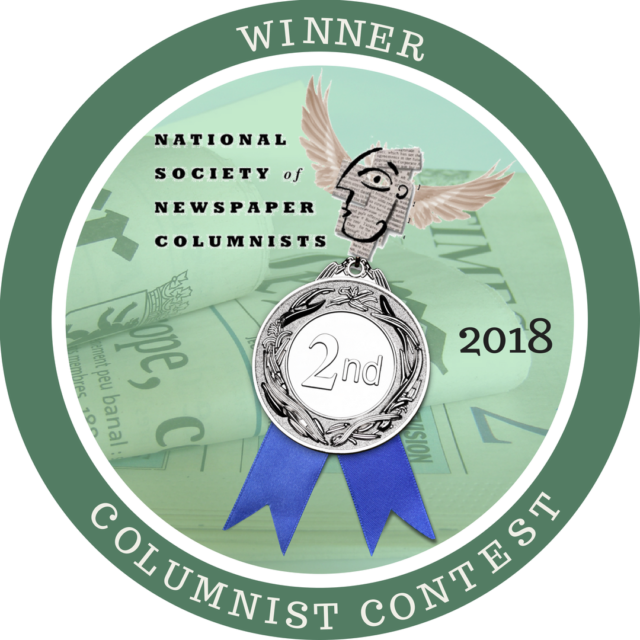 In my category, not only did I not know my analytics, I don’t even know where to find them:

This I know: I don’t have 50k visitors in a lifetime, and this past year, I wrote very little, but apparently I wrote enough because, people: I am officially a NATIONAL AWARD-WINING COLUMNIST. SECOND PLACE. They gave me this cool badge, a certificate, and A CHECK which was for real American dollars, and actually referenced by boobs in the judges’ comments. I kid you not. 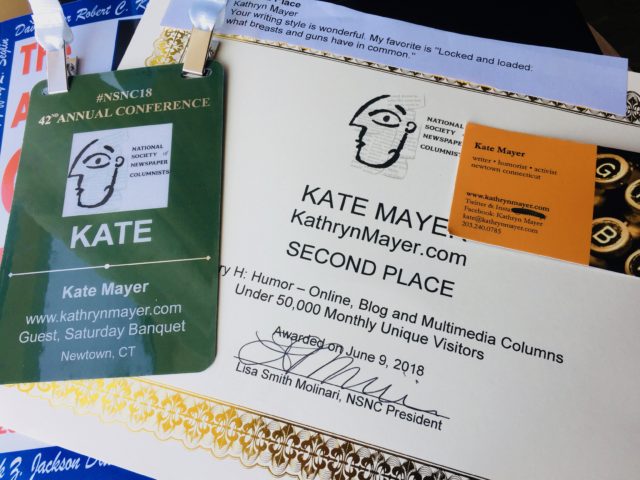 You had no idea, right? I get it, neither did I. But now I do. Signatures, upon request. And thank you for reading, sharing, and laughing when warranted. I so appreciate your eyes on my words. 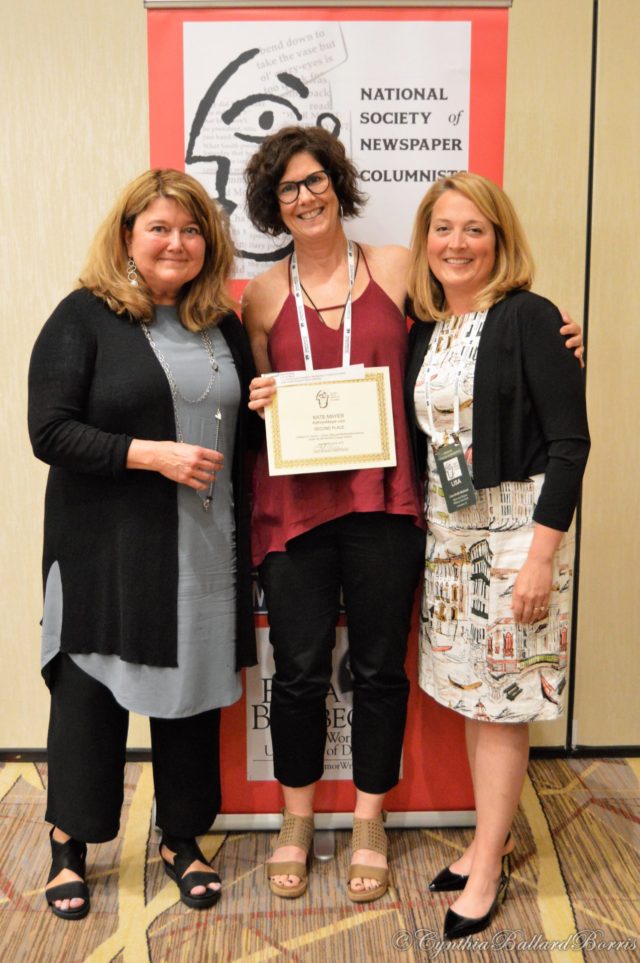 What do you want to drive into the next chapter?
The Lucky Bastard on Purple Clover

An irreverent storyteller with a foul mouth and big heart, Kathryn Mayer (aka Kathy and/or Kate) is a writer, humorist, and (former) activist writing out loud with humor and grace about little life moments with big ripples, including the space between parenting and aging parents, social issues, angsty reflections of midlife, and, sigh, gun humpers. Still. Sometimes a big deal, sometimes not Mayer is a national award-winning columnist, according to the National Society of Newspaper Columnists, and her essays have been recognized as Voice of … END_OF_DOCUMENT_TOKEN_TO_BE_REPLACED