When my kids were small, this was how we did birthdays. Everyone wanted an invite.

We heard it before we saw it. Like fireworks in reverse — engine roaring to make a grand entrance, the Corvette rounded the bend toward the house, Grandpa Mike smiling like a movie star showing up on set, pulling his freshly waxed, buffed, gleaming-like-the-bat-mobile Vette into the driveway, roof down, horn honking, music blasting.

This is how we did birthdays. 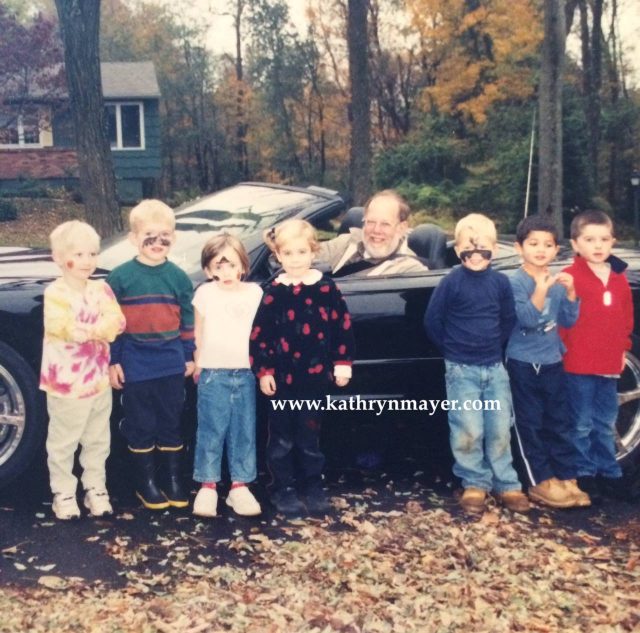 There’d be a booster seat perched in the passenger seat, awaiting a tiny butt or two. Newbies always got a single ride, but regulars were double buckled, then with Willy Nelson cranked to an un-grandfatherly volume, he’d drive to the end of the cul de sac for a ride in the race car.

Once out of sight of nervous parents lining the driveway waving goodbye, he’d peel out, tires squealing, spin a couple donuts – then return like an old man out for a Sunday drive: Grandpa Mike, putt-putting back slow and easy to the house, ready for the next kid in line.

When his grandkids outgrew booster seats and birthday parties, he still showed up in his beloved Vette, taking his grands out for celebrated birthday shopping trip, where he would sit on the “old man bench” outside the chosen store: Limited Too, Sports Authority, definitely Claire’s – “Someplace your mother won’t take you” – until time to pay the bill, then he’d waddle to the register, throw down a fist full of cash, and roar: “I’m starrrrvvvvinnng – let’s blow this popsicle joint and grab some grub” and head off to lunch, where he’d eat all the food on his plate, and most of the food on the birthday kid’s too.

This was his special Grandpa Mike birthday tradition.

The ride in the Vette, the trip to the mall. “Your mother’s not here, it’s just you and me today” and shower them with the Yes’s only a grandpa in a Corvette could do. 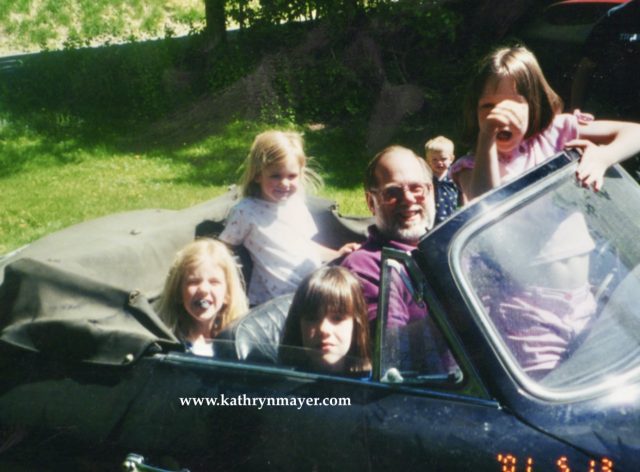 As the grandkids grew, he was healthy enough to teach my three oldest to drive a stick, taking the Corvette to a quiet neighborhood, then barking relentless criticism to “get their foot off the goddamn clutch.” My kids always returned in tears – but worth it for a chance to drive Grandpa’s Vette, and maybe be seen by one of the neighbors, if only from mailbox to mailbox.

And he did this for all his grandchildren, not just mine, for as long as he could. Which wasn’t long enough.

When Parkinson’s ravaged him so badly he could barely lift a fork to his mouth, he still managed to fold his big fat Santa body behind the wheel of his shiny, chic car, then somehow program his rapidly fading neurons to work the clutch, brake, gas and shift enough to propel the car forward, staying in whatever gear he landed, and yes, riding the goddamn clutch.

I prayed to a god I didn’t believe in he’d only hurt himself, and nobody else.

When Parkinson’s couldn’t kill him quick enough, pancreatic cancer stepped in speed up the process, so weakened by chemo, slowed by Parkinson’s, I was surprised and scared when he called to take my youngest, Evan, out for the celebrated shopping spree in the Vette.

Jesus H. Christ, Kathy, give me a break.

“Jesus H. Christ, Kathy, give me a break. Can’t a grandpa spend some time with his grandson?”

There was no way I could responsibly put my kid in that car. With him. Like this.

There was no way I could deny my father what would most definitely be the last birthday outing.

Judge me all you want, I don’t care: “Evan: you wear that seatbelt, tight,” I told him. “and your bike helmet – I’m not kidding” and begged my dad to stay off highways because I really REALLY didn’t think this was a good idea.

He rolled his eyes, with a “Humpin’ Jesus, Kathy, mind your own goddamn business,” and shuffled to the car, dragging his right leg behind him, my sacrificial kid already buckled in the front seat, cranking Willy Nelson up, taking the roof down.

They were gone only a few hours, shorter than ever before, but the longest of my life, when I heard the engine heading up the road, before returning safely to our driveway.

I ran to meet them, where Evan unbuckled, reached over the stick shift wrapping his arms around his incredibly shrinking grandpa to hug him goodbye.

My dad stayed wedged in his car: the seat uncomfortably straight and pulled up unfathomably close to the steering wheel. His hands on the wheel, 10 and 2, his seatbelt not buckled, but pulled across one shoulder and left there, in a sign of solidarity of almost buckling up.

Evan grabbed his bags from the back and yelled, “love you Grandpa” — running into the house with his loot.

“You okay? Everything okay? You wanna come in?” I asked, leaning into the passenger door, looking for any signs of damage on him or the car.

“For chrissake Kathy, why wouldn’t it be?” My dad shook his head in disgust, then in neutral, slowly rolled the Vette in reverse back down the driveway, On The Road Again belting from the open roof. He ground the gears, once, twice, three times, then shoved it into something, and drove away, bucking and cursing, but moving forward.

On the Road Again with the coolest Grandpa

Inside the house, I grilled my son for details. Oblivious, he ripped tags off yet another UnderArmor sweatshirt. “Whaddya mean? We went to the mall. And the diner. And got ice cream! Mom, and EVERYBODY honked at us – everywhere we went! Grandpa’s the coolest!”

“Did Mike drove okay? Was it scary? Were you afraid?”

“Of what? The pricks? Naaah, they didn’t bother us. Just honked. A lot. Grandpa said they’re a bunch of pricks. Told me: when you’re driving, you ALWAYS gotta watch out for the other guy: the pricks. He’s gonna teach me – Grandpa’s gonna let me drive the Corvette! He’s the best!”

But not for nearly long enough. 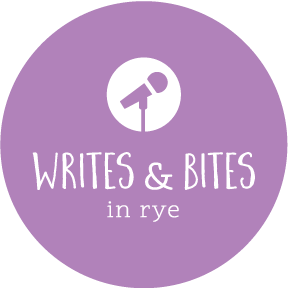 Always room for one more
The history of me, in cars

An irreverent storyteller with a foul mouth and big heart, Kathryn Mayer (aka Kathy and/or Kate) is a writer, humorist, and (former) activist writing out loud with humor and grace about little life moments with big ripples, including the space between parenting and aging parents, social issues, angsty reflections of midlife, and, sigh, gun humpers. Still. Sometimes a big deal, sometimes not Mayer is a national award-winning columnist, according to the National Society of Newspaper Columnists, and her essays have been recognized as Voice of … END_OF_DOCUMENT_TOKEN_TO_BE_REPLACED