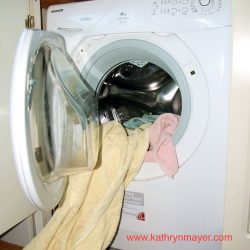 One evening, (okay, perhaps more than just one) after dinner when the kids neglected, yet again, to clear the table, I lost it.

“What’s your deal?” I yelled at no one in particular. Ranting and raving I went off on the deal we had, Dad and I cook, they set and clear. Simple, right? Yet they didn’t follow through, again, so I explained how I ask them to do a job and they can’t seem to get it done, what’s the deal with them, blah blah blah.

She meant it. She wasn’t angry; she was befuddled. Perplexed on the audacity of her mom asking four children to set and clear the table when I clearly was doing plenty of nothing all day long. Reminder: when #1 was in fifth grade, there were 3 more under her. Age at confrontation: 11, 9, 7 and 4… or something like that, I forget.

She really had no idea. So I told her in one word.

That’s what I do all day long. Laundry. But not anymore.

Since then, she’s done her own laundry. In our house, in fifth grade, about 10 years old, you can get your ears pierced and you do your own laundry. A rite of passage of sorts. Now I’ve got 3 out of 4 doing (or not doing) their own laundry. It’s a beautiful thing.

There’s plenty of rifling through drawers searching for something clean. There’s theft of underwear practically every day. And there’s some nasty-ass under-armour that I swear to god is alive. Sometimes there are tears, but not so much anymore. Their rooms often smell, especially during field hockey and soccer seasons. But it’s their clothes, their smell and their rooms.

Do Your Job
One Less

An irreverent storyteller with a foul mouth and big heart, Kathryn Mayer (aka Kathy and/or Kate) is a writer, humorist, and (former) activist writing out loud with humor and grace about little life moments with big ripples, including the space between parenting and aging parents, social issues, angsty reflections of midlife, and, sigh, gun humpers. Still. Sometimes a big deal, sometimes not Mayer is a national award-winning columnist, according to the National Society of Newspaper Columnists, and her essays have been recognized as Voice of … END_OF_DOCUMENT_TOKEN_TO_BE_REPLACED