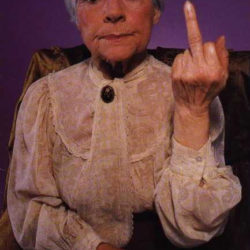 Yesterday, I was a lady who lunched. Three of us went; they had salad, I bit my tongue off, and the inside of my cheeks and my nails. We’re the only two friends this woman has anymore, and here’s why. Our lunchtime, um, discussion:

There was more, but these were the biggies. And while I refuted a few comments, I let most slide with an eyeroll, exasperated huff, and an attempt to cut the meal short. The other friend, also a volunteer Vicki’s befriended, calmly and firmly repeated, all while kindly touching her arm, “You know, Vicki, that’s really not true.” She was terrific.

This miserable friend is well over 90 years old, and has been the 5+ years I’ve known her. She’s old, really, really old, and legally blind, although she could see I colored my hair and let me know she hated it. She took me out to lunch as a thank you because I deliver books-on-tape to her from our local library. (No one else will go anymore, go figure.) She shows me pictures of her boys, one now dead, one 70+, and her husband, also dead. She told me about trying out for the Rockettes, but her boobs were too big and her legs too short. She backpacked through Europe with her husband after her kids were grown. She said working mothers were ruining the world. We debated and I guess I proved a worthy opponent because now it’s relentless.

I have confronted her in the past, like when she told me to return the Sidney Poitier biography because he’s a liberal who should go back to Africa. Or when she screeched in horror that I couldn’t vote for them – they’re terrorists! I fight back when she belittles our town library – they eventually gave her me, of which I remind her often. When I fight back, she gets weak. And scared and confused and dazed and, shit, then I get scared because I really don’t want to hurt her, although practically everything she says is hurtful. So I dance the avoidance dance.

She’s blind. And too fat.  But there’s nothing wrong with her thinker. Except the thinks she thinks. She sits in her dark apartment and listens, she likes to brag, to “all or them.” Rush. Bill. Lou Dobbs. Chris Matthews – who she doesn’t care for because he answers his own questions. Day in and day out, this is what she does. She claims to be an independent, open minded, like her favorite, Lou Dobbs, but, well, you read our lunch menu. And I should question, debate, call her out on her every absurd affirmation. But I don’t. She gets a pass. I guess I’m guilty of elder discrimination too.

She insists we’re having a healthy discussion of the issues. I have a stomach ache. But between racist rants, she freely gives bunion advice and recipes for Pistachio Cake and shares gossip about prissy women in her retirement complex and measures how much she shrinks each year and laughs with such fervor and sparkling in her eyes, I know there’s more to her than parroting hateful talk.

So I bite my tongue as she eats her salad. I’m afraid to engage in a healthy dialogue on the issues because I truly believe it, hence I, might kill her. But saying nothing is killing me.

An irreverent storyteller with a foul mouth and big heart, Kathryn Mayer (aka Kathy and/or Kate) is a writer, humorist, and (former) activist writing out loud with humor and grace about little life moments with big ripples, including the space between parenting and aging parents, social issues, angsty reflections of midlife, and, sigh, gun humpers. Still. Sometimes a big deal, sometimes not Mayer is a national award-winning columnist, according to the National Society of Newspaper Columnists, and her essays have been recognized as Voice of … END_OF_DOCUMENT_TOKEN_TO_BE_REPLACED