Occurred to me recently that perhaps return-to-work moms reading this who didn’t wait until their oldest was 17 to get a J-O-B may not exactly know who Gumby is. Makes me want to gag, but apparently, Gumby is not a household word any longer, but someone forgot to tell me.

See, I’m old. I wasn’t aware of it, regardless of constant reminding from teen-offspring who say I’m not nearly as hip as I think I am. The fact that I say ‘hip’ on a regular basis attests to that. But I am (old, not hip). And I believe I’m aging gracefully, that is, until people don’t know who Gumby is.
But apparently there’s other ICONS who have eluded the present-day hipsters. For example, I’m getting my hair cut by the fabulously chic 20-something when she asks if we should go shorter. I reply, with my 40+ years of experience, shorter makes me look like Rosanna, rosanna danna.
To which she replied, scissors in hand or I would have slapped her, “Who?”
So I look around the salon and ask the other 12-year-olds cutting hair. Nope, no one knows. NO ONE. Out of the chair, cape and grays falling everywhere, and into the waiting corral. 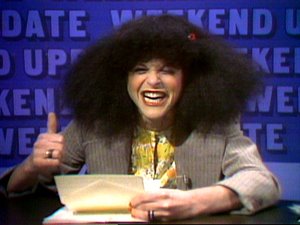 “Rosanna? Rosanna danna?” I plead to a familiar face with adequate lines promising to be in-the-know. The lines immediately turn to a smile, and her eyes twinkle. “God she was great.”
So heads up to you salon girls and boys out there: know your Rosanna dannas before you cut anyone’s hair over the age of 40. And don’t fake it. For chrissake, you can YouTube her and discover SNL when SNL didn’t need Sarah Palin to make you laugh.
PS. The one salon patron hip enough to know exactly who Rosanna danna was … stared at me blankly, and I stared back equally as lost … trying desperately to retrieve Rosanna, Rosanna danna’s real name from the vast archives of SNL reruns trapped in my brain. Took us a long time. Too long. Old enough to remember episodes; too old to get the name off the tip of our tongues.
PPS. GILDA RADNER. You can thank me later.

An irreverent storyteller with a foul mouth and big heart, Kathryn Mayer (aka Kathy and/or Kate) is a writer, humorist, and (former) activist writing out loud with humor and grace about little life moments with big ripples, including the space between parenting and aging parents, social issues, angsty reflections of midlife, and, sigh, gun humpers. Still. Sometimes a big deal, sometimes not Mayer is a national award-winning columnist, according to the National Society of Newspaper Columnists, and her essays have been recognized as Voice of … END_OF_DOCUMENT_TOKEN_TO_BE_REPLACED