Worked picked up, thankfully. Crazy busy, with piddly little boring jobs that will most definitely help out Santa dude, but in the meantime, bore me to death.

I must do something about that. Later. 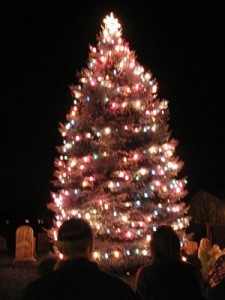 Because I’ve got a teeny tiny problem: the Annual Neighborhood Tree Lighting Party is tomorrow. At my house. Did I say tomorrow?  I probably mean tonight by the time I post this rant.

I tried to opt out this year, I really did. When this tradition started the idea was:  we host one year, someone else takes the next, and we rotate. Take turns. Share. Be, well, neighborly.

Not happening. It’s been 10 years, maybe 11, and the party is still here. Every year. My house. The neighbors. Not the friends. Not the family. The neighbors. Which is really frickin’ awkward because we never see each other all year long, except at our house for the annual holiday get together. Ho. Ho. Ho.

After the town tree lighting, neighbors converge for a little wine and festive cheer. And some of my neighbors are a bit whacked, but on the slight chance they read this, I won’t say which ones. But I mean light-your-house-on-fire whacked.

I used to invite friends, but that got uncomfortable. I felt like I was cheating on my neighbors with my friends. So now it’s just neighbors. No friends, and apparently, no kids.

Which is why I’m pissed.

My kids insisted on this party. It’s tradition and fun and they wanted to make party franks and punch and buy red and green m&ms. I was privately quite pleased that my rather good looking husband and I have created a tradition that the kids feel vested in.

Except they dumped us, every one of the selfish little brats.

Kid #1 is in college, she gets a pass. Kid #2 was invited to a swim team party, immediately elevated to psuedo cool. She’s in. Kid #3 has a birthday party. Hibachi and a sleepover. Who gets hibachi for a 13 year old? Ridiculous. So she’s going. And kid #4, broken arm Boy, was recently reinstated into basketball and they want him. Tomorrow night. That team must really suck if they want broken Boy who hasn’t touched any balls but his own for 8 weeks. Seriously.

So looks like it’s husband and me. And the neighbors. Hide the matches.

An irreverent storyteller with a foul mouth and big heart, Kathryn Mayer (aka Kathy and/or Kate) is a writer, humorist, and (former) activist writing out loud with humor and grace about little life moments with big ripples, including the space between parenting and aging parents, social issues, angsty reflections of midlife, and, sigh, gun humpers. Still. Sometimes a big deal, sometimes not Mayer is a national award-winning columnist, according to the National Society of Newspaper Columnists, and her essays have been recognized as Voice of … END_OF_DOCUMENT_TOKEN_TO_BE_REPLACED