My college girl is in Albania and got there all by her lonesome.

It’s not that I doubted her competence, navigational skill, time management, or ability to triage a situation and react accordingly, but I do.

This is the same kid, who can’t get to the mall 7 miles from home, her best friend’s, nor consider she may need a winter coat. In Ohio. She left her wallet and passport in the shopping cart at Target.

She’s 18, knows everything and nothing at all, all in the same brain. Enough said. 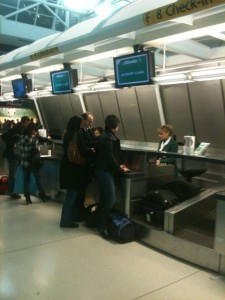 But she did it.

Got through JFK security, paid fee for fat luggage, lost her passport, found her passport, made her flight, with nearly 15 minutes to spare. Despite each man more handsome than the next, according to rapid fire texts, she was seated in the very last row (what happens when you don’t leave when we tell you to), next to an older gentleman with a distinct aroma and humongous wart on his nose, who insisted in Italian, repeatedly, borrowing nail clippers. And she couldn’t translate contraband accurately.

My kid took Spanish. Not Albanian nor Italian. Español.

Watching her leave was both heartwarming and heartbreaking. I was panic-tweeting all young moms to go nurse a baby or change a diaper or play Hi-Ho Cherry-O or dreaded Chutes & Ladders because before they know it, their kid would be boarding an Alitalia flight with drop-dead good looking men eyeing their daughter and checking out her ass. For real.

What happened to Barney, goldfish cracker, couch pillow forts, sippy cups, and Harry Potter? How could this be it? 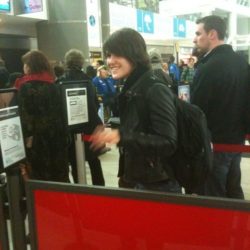 So I took photos, before nearly wrestled to the ground by a  rambunctious, not-so-overly-zealous TSA agent. Apparently they frown upon photographing security checkpoints; probably should have known that.

Our kid is traveling the globe. Paying for airfare, crashing at a generous cousin’s home, mooching off his employer for a fabulous internship, and earning college credit for winter term. Sure beats bagging groceries.

With even a layover in Milan, which sounds quite glamorous, but left a mere 90 minutes before catching a flight to Tirana, Albania. Which is not Moscow, the queue she landed in, but gratefully, that agent refused to accept her ticket.

And now she’s in Tirana, Albania. With no texting, tweeting, cellphone and very little Facebook access. How will she we survive?

She left on a jet plane, and barely slowed down to wave.

Make no mistake about it: I’m very aware our youngest will most likely hitchhike to Rio and we’ll never even notice he left. But the first one? This is freaking us out. 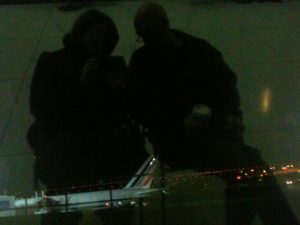 Refection of us watching the oldest fly away. Literally.

She’s literally flown the coop. Rather attractive husband insists this was the plan: raise confident kids ready to take on the world. It just happened all too fast.

Even with 3 kids still at home, that empty nest looming is so overwhelming I’m buying all the kids ponies, which is exactly why the youngest are always so spoiled: because we don’t know how short the time we have really is until that first one takes off.

The Right Gear for the Job
Schools Closed. Snow Day #4

An irreverent storyteller with a foul mouth and big heart, Kathryn Mayer (aka Kathy and/or Kate) is a writer, humorist, and (former) activist writing out loud with humor and grace about little life moments with big ripples, including the space between parenting and aging parents, social issues, angsty reflections of midlife, and, sigh, gun humpers. Still. Sometimes a big deal, sometimes not Mayer is a national award-winning columnist, according to the National Society of Newspaper Columnists, and her essays have been recognized as Voice of … END_OF_DOCUMENT_TOKEN_TO_BE_REPLACED