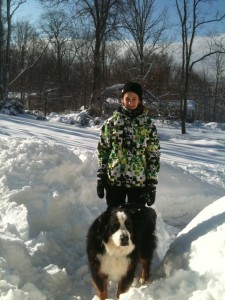 Why she’s smiling I have no idea.

There’s no photographic evidence of the screaming battle that preceded the shoveling of the walkway. It started bright and early when Kid3 got a text and announced,
Can you take me?”

Note: we had an additional 12″ last night, enabling snow day #6. And this isn’t the kinder, gentler snow. This is the heavy, you’re not as young, strong, or in shape as you think category of flakes.

And rather attractive husband is out of town. And college girl is in Albania. So it’s just us. Snowed in, again.

Clearing out after snowstorm is the kids’ job.

So Kid3 shoveled. She did a path wide enough for the dog. Now she’s inside, asking for a ride.

Today’s snow isn’t easy though, and he’s making a maze. For the dog. And will eventually reach the mailbox, but only in 18″ widths. Maybe. Made the mistake of paying him $20 after snow day #5 because he’d shoveled fluffy stuff from the entire driveway and walkway without me even asking. Felt like Big Man. That, and $20 is 20 teeth, and he doesn’t have 20 teeth left to lose. He’s all about the money. Saving for a yo-yo. Or Duct Tape. Or fancy cleats. I dunno. 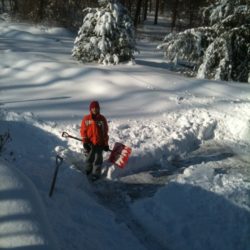 He’s already exhausted and doesn’t understand why his sisters have to help. He doesn’t want them to get their cut. It’s all about cash flow.

Enter Kid2. The small engine repair, mechanical, analytical, I-can-fix-it walking contradiction. She’s 16 and, that’s right: snowblowing. They gave her a permit to drive, so why not snowblow? Bottom line is the driveway is getting cleared. So Kid3 can go to her Odyssey of the Mind meeting (why, people, why?), Boy can get paid, and Kid2 can brag all about it on Facebook.

She got the snowblower working, and is loving life right now. In fact, she’s secretly hoping the engine breaks so she can take it apart and put it back together again. This apple, my friends, fell far from the tree. 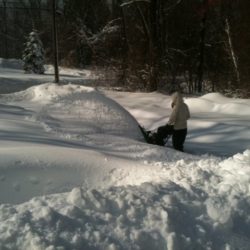 Today, everyone is working at home, all of us, on Snow Day #6.

Epilogue: This post is boring, but it is my life. And if you’re sick of reading about snow, I’m sick of writing about it.

The working life has been less boring as of late, and is in fact, keeping me up way past Jon Stewart.

In short: I got a raise. No kidding. Still not enough hours to go out to dinner, but a raise, nevertheless.

Another client re-emerged from the sucky economy and wants a couple quotes. COUPLE.

One permanent job evaporated – into the great abyss of no news, emails, work, texts, nothing. Gone. Vanished. Kaput.

So I wrote a goofy letter responding to an interesting craigslist post and received not only a response, but an interview for next week! And there’s an odd connection between me and potential client: she read my blog and wrote, “I love you already.” Hmmmm.

This may be good.

Earning & Momming Done Good. Real Good.
That TOYOTA Brat Pissing Anyone Else Off?

An irreverent storyteller with a foul mouth and big heart, Kathryn Mayer (aka Kathy and/or Kate) is a writer, humorist, and (former) activist writing out loud with humor and grace about little life moments with big ripples, including the space between parenting and aging parents, social issues, angsty reflections of midlife, and, sigh, gun humpers. Still. Sometimes a big deal, sometimes not Mayer is a national award-winning columnist, according to the National Society of Newspaper Columnists, and her essays have been recognized as Voice of … END_OF_DOCUMENT_TOKEN_TO_BE_REPLACED