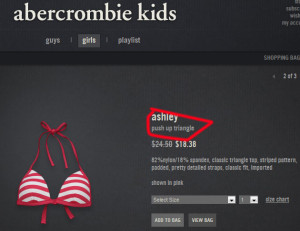 Friends have been asking me when I’m going to go off on the Abercrombie push-up bra for the busty 8 year olds in your life.

I need to protect myself from the Abercrombie loving feminist trolls who attacked without warning when I confessed I would not, could not, shop at perfumed slut inducing stores sexualizing little girls.

Boy, did that hit a nerve.

I was hating Abercrombie long before it was cool to hate Abercrombie.

What’s not to hate? The price? The smell? The billboard advertising we pay $26, 36, 40 to emblazon across our small chested daughters to parade around school? They should be paying these kids to wear their stuff; not the other way around.

But here’s what I am going to say:

They wouldn’t be selling it if adults weren’t buying it.  No 7, 8, or 9 year old has lost enough teeth to shell out the $18 for the bikini. Not if there’s Sour Patch Skittles to choose instead. And the tweens insisting on these clothes have their parents by the nutsack or boobsack; it’s the adult’s job to be the grown-up and say no-fucking-way.

It’s what parents do: PARENT.

So if there’s an adult opening a wallet to shell out the dough, there will be a corporation ready to produce it. It’s the American way. Or actually, the made in Indonesia-China-India-Guatemalan way.

And if the technology exists to create a bra to give breasts to someone who still sleeps with an American Girl Doll, why can’t a bra be made to keep my boobs where they used to be – rather than escaping at every given chance like the Bronx Zoo cobra. Push up, pull up, tape up, inflate up, whatever it takes. I’d buy it.

An irreverent storyteller with a foul mouth and big heart, Kathryn Mayer (aka Kathy and/or Kate) is a writer, humorist, and (former) activist writing out loud with humor and grace about little life moments with big ripples, including the space between parenting and aging parents, social issues, angsty reflections of midlife, and, sigh, gun humpers. Still. Sometimes a big deal, sometimes not Mayer is a national award-winning columnist, according to the National Society of Newspaper Columnists, and her essays have been recognized as Voice of … END_OF_DOCUMENT_TOKEN_TO_BE_REPLACED