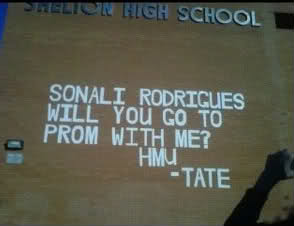 This is not going to be funny, because I’m pissed. School restraints on children’s behavior are insane and I have a better idea:

If you don’t like kids, don’t work in the schools.

School budgets and zero tolerance and No Child Left Behind is an overwhelming obligation of a school district, but somewhere along the way, we forgot about the kids and families these rules effect.

There is nothing black and white about raising, teaching, mentoring, or leading children: the entire deal is gray. Or rainbow, but very seldom – if ever – black and white.

Take, for instance, the Shelton Prom controversy. Senior James Tate put letters on the exterior of his school inviting his date to prom, and was suspended for trespassing and breaking school rules. Twitter erupted with #TeamTate international support, and eventually (but not nearly quickly enough) the administration changed their decision. Good for them.

Take, for instance, the Maryland lacrosse player Boy Scout, who after being suspended from school for one erroneous decision, was cloaked in shame when removed from his world. He committed suicide. He’s dead, people.

This is serious.
Dead serious.

While national news gives me solace that this insane behavior is not My Town specific, but epidemic nationwide, I’m not sure I’m comforted by the uniform assault on youth. The same boards and committees and administrations that are supposed to educate students into competitive citizens prepared to compete in a global market, have instead created an atmosphere of fear (and loathing). I’m not sure learning to lie and fib so not to be suspended or disciplined or thrown off a team or stripped of honor society for the most minor of indiscretions is the most productive way to create these future world leaders. 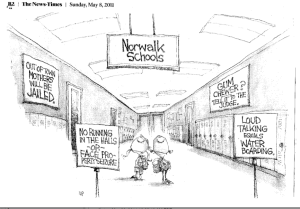 So although I have one in the midst, and two younger children yet to go through our esteemed high school, I opened my big fat mouth and signed my name to voice my concerns over the draconian effects of an administration gone wild. I’m sure I’m going to regret it.

As a tax payer, constituent, community member, and parent of three kids in the system (and one already out), my husband and I sent the following email to the Board of Education, Superintendent, and Assistant Superintendent:

A quick note to encourage a new path in leadership at XHS. An additional AP is not the answer, and the idea of having yet another role model pursing negative behavior at the high school is ridiculous. There are good things happening at XHS, but they are persistently overshadowed by the negative image portrayed by the administration. We look for additional ways to punish the bad kids; to catch the rule breakers; to lock down teenage behavior; to pursue zero tolerance to whatever extent: regardless of the kid, personal situation, or act of discretion.

Leading, mentoring, educating, and parenting teenagers is nothing if not gray; it is certainly not as black and white as XHS instills. XHS’s approach that all kids are bad until proven otherwise needs to stop, and an additional AP pursing and monitoring suspensions is not going to do it.

How about this: additional guidance counselors and psychologists to lead these kids to better decision making, rather than the bullying environment My Town is so happy to preach against from the pulpit, but unwilling to recognize in their own administration? How about APs that are part of the community, rather than a police state making teens criminals for each and every teenage decision? How about recognizing the teachers in the classroom, who actually know the kids, may have insight to an inappropriate act? How about opening the school up to become a learning environment for the whole child (because these are children in adult bodies), create a conversation with students, rather than a top-down dictatorship where the students have absolutely no power or voice?

We are not anti-administration: We are anti-AP. Hire more guidance counselors. Hire more psychologists. Hire a team player for XHS, and not yet another person to throw the hammer down on kids just beginning to grow up.

What was the official Board of Education response to this private email nearly a week ago?

And, full disclosure, this was written two days after we voted to pass the town/school budget, despite reservations on the plans of our administration to hire yet another Assistant Principal whose sole duties will be to handle the disciplinary actions at the high school that have reached “crisis level” (according to superintendent of schools).

No response. Zero. Nada. Nothing.

If the administration does not listen or respond to concerns from voting, vocal parents in the community, how do you think they respond to teenagers (or tweens) stripped of the very limited voice they are allowed to have?

Speak up people. It’s time to give our children a voice.

PS. Don’t get all militant on me about crime and punishment. I’m all about consequences for bad decisions. I’m the mean, strict mom in town. But growing up is all about the decision making evolution. And I’m not teacher-bashing here: this top down management. Teachers, in fact, know what’s going on, but administration seldom consults for background information on a kid when enacting punishment. They don’t discern about divorce or dead dads or stressed families or cancer riddled siblings when laying down the law. “A rule’s a rule.” When school districts treat pen-knives and Advil and water balloons with the same discipline as drug trafficking, violence, and drunk driving, a voice of reason must prevail. And if our school administrators don’t have that voice, it’s our job as a community to demand that they do.

An irreverent storyteller with a foul mouth and big heart, Kathryn Mayer (aka Kathy and/or Kate) is a writer, humorist, and (former) activist writing out loud with humor and grace about little life moments with big ripples, including the space between parenting and aging parents, social issues, angsty reflections of midlife, and, sigh, gun humpers. Still. Sometimes a big deal, sometimes not Mayer is a national award-winning columnist, according to the National Society of Newspaper Columnists, and her essays have been recognized as Voice of … END_OF_DOCUMENT_TOKEN_TO_BE_REPLACED