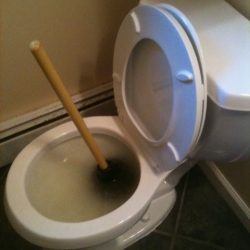 Time to make the donuts.

After I unplug the toilet.

It could be worse. It could always be worse.

For instance, the 5 days with no internet access. Which means no work communication, or rather one-way communication with no response from me. Not smart. And no Facebook for teens which is apparently inhumane treatment.

But I will not complain, as we have power and water and a town still standing, and there’s no tree splitting my house in half.

The early dismissal due to HEAT (2 days), was quite enjoyable, because for the first time EVAH, rather attractive husband was sent into a tailspin because his working wife, moi, was out of town on BUSINESS. Yup. That’s right.

But he’s got karma, that bald one.

Somehow he rigged me into a mid-90s flashback, back when I, home with babies and bloody cracked nipples and a back-upped toilet and wicked bad snowstorm and no snow tires or plow service, and for some reason bats in the bedroom come to mind, while he’s lounging in New Orleans during a Sports Illustrated swim suit photoshoot (coincidence? I think not) claiming to miss his family back home.

Present Day: He’s away and this morning, I awoke to dog puke (3 piles) probably from the garbage he ransacked throughout the garage; a nasty-ass backed up toilet (DO NOT FLUSH TAMPONS GOD DAMN IT); a must-attend field day where we need 100 water balloons but the hose is slit and leaking after being under 17 feet of snow all season and apparently there’s no manual on filling these things or an age-cap which I clearly exceed. Oh, and it’s finals weeks where the teens here are a little on edge. Just a lil’ bit.

And oh yeah, there’s the work thing. I’m on deadline for a terrific marketing project that pays quite well, but a loser client has emerged from the ashes and is stalking me virtually and literally and asking for obscene amounts of work with little notice and less pay.

To give a mouse a cookie…or a moose a muffin… or a mom a plunger.

An irreverent storyteller with a foul mouth and big heart, Kathryn Mayer (aka Kathy and/or Kate) is a writer, humorist, and (former) activist writing out loud with humor and grace about little life moments with big ripples, including the space between parenting and aging parents, social issues, angsty reflections of midlife, and, sigh, gun humpers. Still. Sometimes a big deal, sometimes not Mayer is a national award-winning columnist, according to the National Society of Newspaper Columnists, and her essays have been recognized as Voice of … END_OF_DOCUMENT_TOKEN_TO_BE_REPLACED