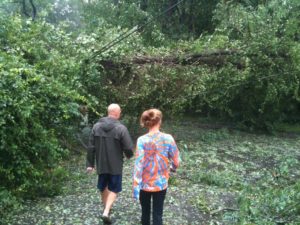 Hurricane Irene was a one-night stand like no other. No flowers, no drinks, no nothing. We barely made eye contact. Wham, bam, thank you ma’am.

In the morning it was over, and we realized just how she trapped us in her wrath. Irene only screwed the beginning of our road, successfully trapping 18 families with no way out. And no way in, should an emergency arise.

Which it didn’t, for which I’m forever grateful.

The Jenga mess of telephone poles, wires, and trees – so many trees – is scary, still. Because it’s still out there, and we’re known as the “neighbors on the other side of the trees.” Like Children of the Corn, except with wine. And beer. And chips.

And while tweets were coming in about where water and food was available, and lying guesstimates on when power would resume, no one seemed to know we existed. I tweeted out like a banshee, outing myself on Twitter with street address and town and no doubt losing tons of friends for my kids.

Called power company who are so very nice on the phone, and so very absent in real life. Called the mayor and the ad-min didn’t believe me. That’s okay; she said help was on its way, and I didn’t believe her either.

Playing Chicken, or, My Chainsaw is Bigger than Your Chainsaw

Called the cops when bozo neighbors set out with chainsaws to free the street, with no regard to the ricochet factor of physics and pressure and tension and exactly what should be cut first. Or the fact that the wires were quite possibly still live. (The cop was a complete, dumbass. See future blog about that moron. I’m not through with him yet!)

So that’s the bad news; yet still no one “official” showed. Neighbors did manage a path and no one got fried and we can all get out.  And the one hard hat we saw said, honestly and we appreciate it, maybe Sunday. But probably mid-next week. (six days as of this posting… 6 no power, no nothing days)

Which is fine with us, sort of, because in reality, no one got hurt, damage was minimal, inconvenience maximal, and that, people who think this was no big deal, is something to celebrate. 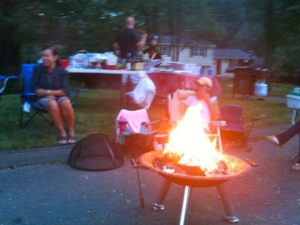 Which is a-okay, because every night, about 5:00 pm, we gather in the middle of the street, with grills and soda and kids and dogs and bikes and scooters and quite a bit of wine and beer, and we kvetch and bitch about being ignored by the town, how dangerous it is, and how cute the kids are.

Old people, pregnant people, kids, teens, dogs, moms, dads. Night after night, hoops and s’mores and Frisbee and burgers, until the freezers are bare and the power company shows up.

Thanks for the meet ‘n greet Irene. Been here 12 years and finally getting to know my neighbors.

The Drive Before the Storm
Going on a Business Trip, Gonna Be a Real One, I’m Not Scared!

An irreverent storyteller with a foul mouth and big heart, Kathryn Mayer (aka Kathy and/or Kate) is a writer, humorist, and (former) activist writing out loud with humor and grace about little life moments with big ripples, including the space between parenting and aging parents, social issues, angsty reflections of midlife, and, sigh, gun humpers. Still. Sometimes a big deal, sometimes not Mayer is a national award-winning columnist, according to the National Society of Newspaper Columnists, and her essays have been recognized as Voice of … END_OF_DOCUMENT_TOKEN_TO_BE_REPLACED