Here’s what went down:

On Twitter, I unleash my inner mean 8th grade girl: I’m not proud of it. Okay, maybe a little bit proud. I heckle parents (anonymously) at Open House. I berate high school administrators (anonymously). I taunt power companies and local political leaders (not-so-anonymously). I give running commentary of parent crazies at soccer/swim/basketball/lax rather than watch 12 year olds run around (thank-god-anonymously or my kids would never get playing time).

And, while I’m not proud of this (because I got caught), I admit I did provide a live feed of Kid2’s arrival of first date with handsome upperclassman, which went as follows; start at bottom and read up: 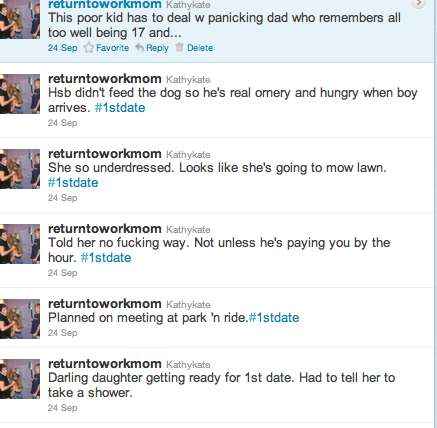 Which I continued, nervously tapping away while waiting for a FOOTBALL player no-less, arrive to whisk my perfect daughter away. Again, start at the bottom (or email me and teach me how to reverse the order, thankyouverymuch). 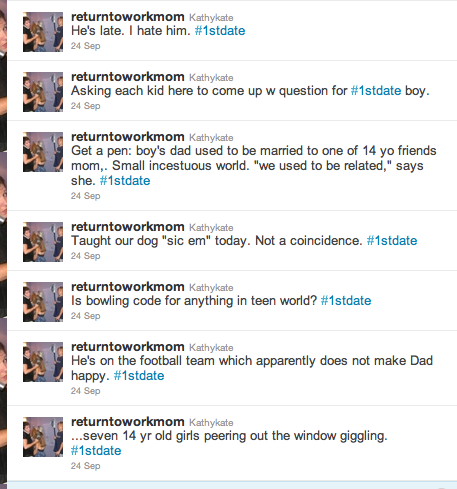 The live action tweet didn’t phase Kid2, or rather attractive husband, or the seven 14 year olds giggling like bobbleheads with bells. Because seriously? No one is listening, no one is reading, except one local Dad who inadvertently discovered we were neighbors. Oops.

Everybody else who follows me is Canadian; for some reason I’m very big in Canada.

And then I tweeted that rather attractive husband was following them incognito.
Which was a lie.
Because I took the car keys away.
But here’s the problem:
It seems Kid2’s friends follow me and I’m not as anonymous as I once believed.
Tweets arrived warning us to leave them alone and not bother them and cut the crap and not to let Dad out of the house! Later, Kid2 informed me “everyone” at school was talking about it.
Kid2 didn’t seem to mind; not so sure about her date.
At 47 I’m finally popular in high school, and I so don’t want to be.
I considered twitter my own Adult Swim, anonymous live feed editorials of my little world, and instead I-yam-who-I-yam, on a soapbox in the public square of the high school cafeteria.
It’s my worst nightmare, except I’m wearing clothes.
Big time parent fail.
That said, the date was a teeny-tiny bit scared, and daughter was home by 10. All-in-all, not such a bad night.
But am on serious censor mode henceforth, which takes all the fun out of fun.
Sigh.

An irreverent storyteller with a foul mouth and big heart, Kathryn Mayer (aka Kathy and/or Kate) is a writer, humorist, and (former) activist writing out loud with humor and grace about little life moments with big ripples, including the space between parenting and aging parents, social issues, angsty reflections of midlife, and, sigh, gun humpers. Still. Sometimes a big deal, sometimes not Mayer is a national award-winning columnist, according to the National Society of Newspaper Columnists, and her essays have been recognized as Voice of … END_OF_DOCUMENT_TOKEN_TO_BE_REPLACED