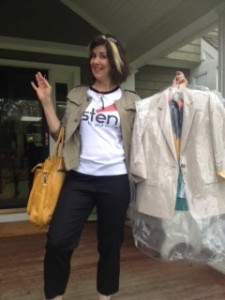 I wasn’t so nervous for the New York debut of Listen To Your Mother, mostly because the other presenters were pros at doing this and made everything seem just so easy.

I wasn’t nervous when MetroNorth broke down and delayed all trains in and out of Grand Central “indefinitely,” because I, for once in my life, was early and had indefinite time to wait. Or at least 3 extra hours.

I wasn’t nervous when MetroNorth buttholes suspended all trains in and out of New York at 8:30 Sunday morning, and announced in Charlie Brown Teacher Voice that we should look for another mode of transportation, and they apologize for any inconvenience.

I wasn’t too-too nervous when Kid2 had her debut city driving adventure to pick up a stranded mom anxious to get to her big time playdate with some very important writers. 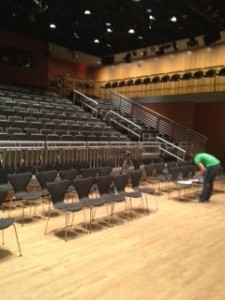 I wasn’t nervous when I arrived 90 minutes late for the final walk through, with practically everyone gone for lunch and wardrobe change, because the very talented director Amy Wilson, powerhouse emcee René Syler and last writer standing Deborah Goldstein stuck around to hold my somewhat sweaty hand.

I wasn’t nervous when I discovered the Green Room isn’t green, and the other writers had brought pens, gifts, makeup, curling irons, protein bars, scissors, duct tape, three hole-punch, lint brush, deodorant, tissues, moisturizer, water bottles, and the one and only Kathy Curto as a tribute to her parents, remembered good luck charms: her mom’s handkerchief and her dad’s black shoe polish. Not nervous because these superstars shared everything from their confidence to their lipstick with this mom who was blotting the wrong color lipstick on a Walgreens receipt from her purse.

I wasn’t nervous when producer Varda Steinhardt handed out a special bracelet I will forever treasure, and the leaders of this cast, gave us all charms that said simply, Listen, with handwritten notes thanking us, like we did something for them. And Amy Wilson gave a pre-game pep talk so heartfelt, so filled with gratitude, I felt somehow I had done something for her. Not nervous at all.

But when we queued up to enter the sold out house, I was placed between the über talented Una LaMarche and clean-up hitter Jonny Schremmer, and began to panic. Really, really, heart palpitation, sweaty pit, cotton mouth panic; gonna probably throw up or crap my pants panic.

She smiled. She didn’t say much. Calm, cool, collected. With good lipstick.

The line was moving. People were clapping. My head was spinning. It was like I was underwater.

I turned around, desperate:

“You know when you’re on the roller coaster and it’s going up, up, up and suddenly you realize you’ve made a terrible mistake and YOU HATE ROLLERCOASTERS and you really, really want OFF RIGHT NOW??? I have that feeling, now, right now, I can’t do this.”

Jonny nodded, and gently pushed me forward, because the house was packed, and the ride had already started.

And when it was finished?

It was like this, except a thousand times better: 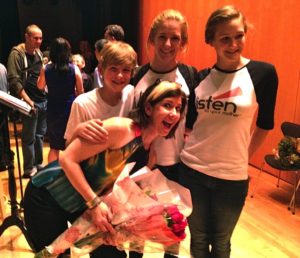 Crying in the Lord and Taylor Dressing Room
Bedroom Makeovers: When Teens Want Their Own Room

An irreverent storyteller with a foul mouth and big heart, Kathryn Mayer (aka Kathy and/or Kate) is a writer, humorist, and (former) activist writing out loud with humor and grace about little life moments with big ripples, including the space between parenting and aging parents, social issues, angsty reflections of midlife, and, sigh, gun humpers. Still. Sometimes a big deal, sometimes not Mayer is a national award-winning columnist, according to the National Society of Newspaper Columnists, and her essays have been recognized as Voice of … END_OF_DOCUMENT_TOKEN_TO_BE_REPLACED