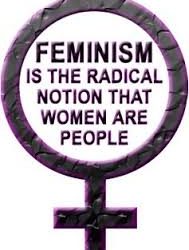 Apparently Time magazine is still in print, and you can check out the current edition at a podiatrist’s office near you. It features an article, Which Words Should Be Banned for 2015, with a list of worst words poll, of which “feminist” is one.

2015. Feminist. And Time magazine suggests we ban it.

In the year of domestic violence, rapes across college campuses, birth control limited by employers, women’s reproductive health care banned outright, equal pay for equal work DENIED, video of cat-calling going viral and people (aka women) not surprised in the least, and well, you get the picture.

And the response from a reputable news magazine is to ban the word that best represents those of us committed to stopping the eradication of those of us with boobs. And brains.

Time issued a timely (you’re welcome) apology, saying the nuance in which the word Feminist was offered to their “word banishment poll” was lost. Why yes it was.

So I share with you this story from a long time ago, in a galaxy far far way: or last summer here in Newtown:

A middle-aged woman walks into a bar (that would be me) with her rather attractive husband, and we see another couple (known ’em for years: but very different circles. very.) We are bleacher friends; wave, smile, how-you-been-just-being-polite-don’t-really-care acquaintances. We are not come over and drink a Costco-sized bottle of vodka and hit on my wife kind of friends. He’s the token town ass-grabber. Always has been, always will be. His greeting to me:

“There you are, you frickin’ wise ass! Hey, how’ve you doing? You’re everywhere! Saw you in the paper, you frickin’ sign holding, gun grabbin’ loser liberal. Jesus Christ, you bra-burning feminist. Admit it, frickin’ feminist bitch, ain’t cha? You know you are! Jeeeeesh!”

To which I respond: finger in his chest, nose to nose:

I would love the word feminist to be obsolete, not banned. Retired, not reduced. Until then, it should be overworked and overexposed, by all humans. It should be celebrated, exhausted, and included at every intersection of life.

Until then, we have Gina Barreca, UCONN professor, author, feminist, and funny-as-shit speaker, with a brilliant response to this sexist ridiculousness in HuffPost, where she references humor, feminism, I Dream of Jeannie, with plenty of feminine protection:

“I’ve spent more than 20 years working on women’s humor and, trust me, all women’s humor is feminist humor. Any time a woman holds the attention of the crowd by keeping her clothes on? That’s a feminist gesture. Frankly, this is not a tough argument to make: it’s just that every time a woman opens her mouth with the intent to send those around her into gales of laughter, she’s committing a political act because she is putting herself at the center of the attention to be listened to and not simply looked at. …

“The genie you really want to find is the woman quick-witted, brave and willing to be funny in public. She’s the one you want to talk to about feminist. She’s not too hard to spot, either: she might as well be wearing a sign around her neck, written in rhinestones, saying: “I am a Bad Girl and I am Not Going To Calm Down.” She is NOT Barbara Eden, but her daughter.” 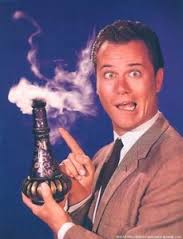 “You got to get the genie out of the bottle for something interesting to happen.”

Thanks Gina. And thanks, but no thanks, Time.

Post-election blues and celebration
When a word is not what it seems, and you gotta tell her

An irreverent storyteller with a foul mouth and big heart, Kathryn Mayer (aka Kathy and/or Kate) is a writer, humorist, and (former) activist writing out loud with humor and grace about little life moments with big ripples, including the space between parenting and aging parents, social issues, angsty reflections of midlife, and, sigh, gun humpers. Still. Sometimes a big deal, sometimes not Mayer is a national award-winning columnist, according to the National Society of Newspaper Columnists, and her essays have been recognized as Voice of … END_OF_DOCUMENT_TOKEN_TO_BE_REPLACED