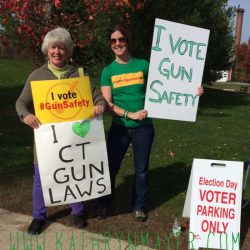 That said, the idea that Newtown voters didn’t overwhelming landslide Malloy into office makes me a little bit nauseous, and the fact that they (aka we) elected (either by voting for or by staying home) our resident dirtbag state representative Dan Carter (complete disrespect not implied, but 100% directed) made me literally want to pack up and move. I wasn’t sure I could live in a town – this town – that would support candidates that didn’t support this issue.

Thing is, I made gun violence prevention my number 1 issue, but that doesn’t mean everyone else did as well. And people think midterms don’t matter. And then decisions are made by those who go to the polls: decide or others decide for you.

But I crossed the finish line. I didn’t want to wake up Wednesday morning and wish I had done more. I did everything I could, I had nothing left when the polls closed at 8:00 pm. I made calls, I wrote letters, I spoke, and I did a little poll-standing (which is quite different than pole dancing and not nearly as lucrative).

And now, I live by democracy elected. That’s how it works. While democrats got their ass whupped nationwide, gun safety won big time, and perhaps, just perhaps, future candidates will side with safety, and not cower to extremist pressure and dollars.

I wanted Malloy to win, and Carter to get out; everyone else I could live with. Maybe they weren’t my candidates, but they showed hope and promise to be gun safety candidates. Mostly.

A couple (more than two, three, okay, maybe a dozen) friends reached out post election, to check in. People want to know whether I was giving up, giving in, or just moving on.

Not moving on. Nope.

I’m just doing. Everyday, this nobody does a little bit, to make a kinder, safer world. And election cycle by election cycle, we will get there.

And, for the record, I won’t be bullied or chastised into submission: that’s for pole dancers, not poll-standers, despite the best efforts of some to do so. But that’s for another post.

*Please commit to doing any action possible to make a positive change where you live, so our story doesn’t become your story. Join a group in your community. Send an email. Be a friend. Find a cause. Share on Facebook. Hold a sign. Make a difference. VOTE.

An irreverent storyteller with a foul mouth and big heart, Kathryn Mayer (aka Kathy and/or Kate) is a writer, humorist, and (former) activist writing out loud with humor and grace about little life moments with big ripples, including the space between parenting and aging parents, social issues, angsty reflections of midlife, and, sigh, gun humpers. Still. Sometimes a big deal, sometimes not Mayer is a national award-winning columnist, according to the National Society of Newspaper Columnists, and her essays have been recognized as Voice of … END_OF_DOCUMENT_TOKEN_TO_BE_REPLACED