Conversion therapy would never have existed in the first place if my mom were in charge of the world. There would be no need.

My no-drama, mind your business mama 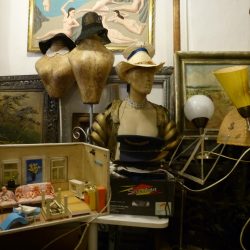 Back in the 1970s, long before many homosexual people were referred to as gay, or called anything at all, my parents were in the antique business. Which was then the mecca for (many) gay people. And wickedly smart people. And plenty of weirdos. Sometimes folks were all three, but not always. My parents were both teachers (smart and weird), also broke, so they supplemented their income by buying and selling antiques.

This meant long weekends wandering up and down dirty aisles of flea markets, antique shows, and auction halls that smelled like funnel cake, barns, and old lady purses. The original American Pickers, instead of soccer or softball or dance, I spent days picking through boxes, tables, and trunks of cars for our specialties: photography, tin toys, local memorabilia, rag dolls, Early Americana, car stuff. Quirky collectibles. Unique, clever, mark it up, and sell it soon.

And I had a good eye. My mom would give me, my birthday barely hitting double digits if that, a fist full of 20s, her dealer taxID number, and send me on my way, picking the fields of Stormville, Brimfield, or street fairs in New York.

Dealers always eyeballed a dirty little kid dressed like she just rolled out of the back of a van, because often that’s exactly what I did: pickers and dealers often sleep in their cars to get an early start on selling, and most importantly, buying.

“Can I help you, little girl?”

“Just looking,” I said, mistaken for a pain-in-the-ass kid, the you-break-it-you-bought-it type, or worse, a shoplifter. But all that changed when I unrolled a Walter White fist of cash and asked,

“What’s the dealer price on this? How much for cash?”

Once I was picking Brimfield with my mom late in the day. While thumbing through a box of tintypes, looking for anything absurd: dead people, civil war soldiers, circus freaks, animals – I looked up to find the dealers, two men, legs swinging, sitting on the tailgate of their truck. They were laughing, their legs tangled, leaning into each other. One had a guitar, the other a beer. From my fifth grade self, they appeared to be flirting. And then they kissed.

“Mom! Look! What are they doing?” I whispered, elbowing her hard to pay attention.

“Them? Oooh, kissing,” she said, glancing up, then back at a 19th century salt glazed stoneware crock with two folksy birds intricately painted on its front in a deep, vibrant blue.

I was enthralled. BOYS KISSING. Didn’t see that on Little House on the Prairie. Or Happy Days. Not even the Odd Couple!

“Stop staring, Kathy. It’s none of your business.”

“Really? I just … I didn’t know. Okay, cool.” My mom made it no-big-deal, and therefore, it was, and remained, no big deal. No conversion necessary. She turned and walked away, onto the next booth, the next unexpected discovery. I stayed, seeing something my mom didn’t.

“Excuse me sir? Sir? How much is this?” I asked, and the dude swung off the back of the truck, came over and looked at the oversized photo I held in my hand. It was a lithograph of an Indian elephant, with some sort of prince or princess – I couldn’t tell which –standing awkwardly next to it, staring straight into the camera, not daring to blink, uncomfortable at the spotlight shining on him or her. The costumed elephant was ever the regal, docile, and confident subject.

“This? It’s a lot, you know, probably shouldn’t touch it. It’s rare and expensive: $150; shouldn’t even be out here,” he said, taking it from me and putting it out of reach.

He smiled a condescending smile at a little girl out of place in a field full of dusty memories, mostly unappreciated, some undiscovered yet valuable to someone, somewhere. He turned and walked away, but not for long.

He turned back, walked over, smiled, and we got down to business.

Hat tip to writer Liz Page Rosenberg (@smacksy) whose story, That Kid, reminded me of the the two guys in the back of the truck. She recently posted about her son asking about tutus. Or specifically, that kid wearing a tutu. It’s very short, very sweet, and pure brilliance. Read it here. Go, really, it’ll take you less than two minutes.

Told you so, right?

No conversion necessary. Not for me, not for them. Not for anyone, except maybe, perhaps for those deeming it necessary in the first place.

An irreverent storyteller with a foul mouth and big heart, Kathryn Mayer (aka Kathy and/or Kate) is a writer, humorist, and (former) activist writing out loud with humor and grace about little life moments with big ripples, including the space between parenting and aging parents, social issues, angsty reflections of midlife, and, sigh, gun humpers. Still. Sometimes a big deal, sometimes not Mayer is a national award-winning columnist, according to the National Society of Newspaper Columnists, and her essays have been recognized as Voice of … END_OF_DOCUMENT_TOKEN_TO_BE_REPLACED