But last year I did something a little different. I focused on the writing, and wrote it down, where I wanted to be a year from then, which is now. Right now. 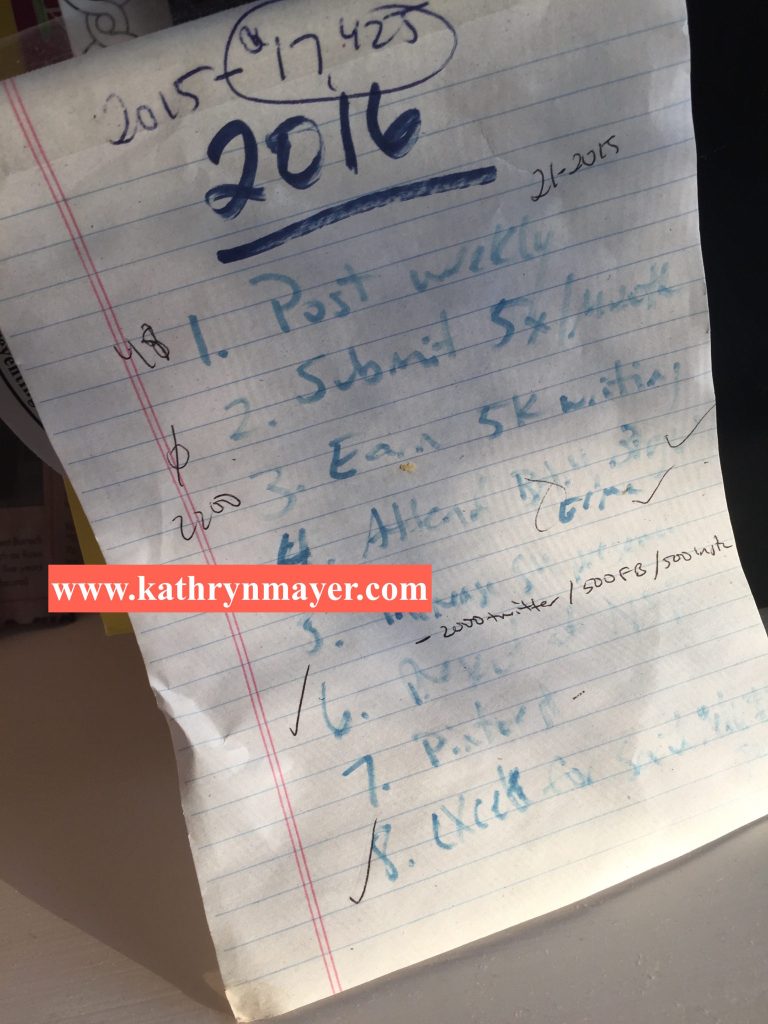 If you want it, write it down.

Goal setting is not the same as goal achieving, but it is absolutely a step in the right direction.

Write it down: not sure it’ll work the same for a beach house, hot date, or new breasts, but last year I made a blogging/writing goal list after reading such a challenge on – where else? Facebook.

It wasn’t a big deal or public declaration. I just wrote it down. With a pen. On paper. Then taped it to the end of my file thingy (yes, the formal term) and forgot about it, sort of.

The first of every month, I did check my social media stats – facebook, twitter, instagram – (#5), and I did create a little excel spreadsheet (#9) to monitor said numbers. (I also added my weight but since I don’t own a scale, I enjoyed the monthly weight loss, only to be sadly mistaken when a yearly physical proved me very wrong. Very.)

These official numbers were recorded on the first of the month, the rest of my goals were dutifully ignored, or so I thought, until the year wound down, and I took a good hard look at the list, and realized, I got shit done. Not all of it, but some of it, and way more than I ever expected.

I love crossing things off a list, any list, but these were goals that I never expected to remember, let alone manage, and far from complete.

And yet I did.

I attended two out of the three writing conferences (#4), only made half of my essay writing goal income, but doubled copywriting and content management earning. Which is really, really good, unless compared to a couple years back when I earned a real salary, but this is about looking forward not backwards, no matter how pretty the view.

I never did learn Pinterest, and most certainly didn’t post here weekly, except for NaBloPoMo, when I posted daily in November, so more than doubled my posts from the year before so –BANG #gettingshitdone.

The big fail? Did not submit my essays five times a month, but instead, maybe 10 times all year. The big win? Those essays landed in places I never dreamed possible. So that’s a big win for this loser right here.

The point is, I wrote shit down. Casually, half-heartedly, as part of a silly Facebook pledge, until I realized at the close of the year that I could actually check off six of the eight goals, and that felt freaking awesome. Now it’s time to get out the ol’ sharpie, and write new ideas goals, and stick it on the file thingy, and wait and see.

Ex-boyfriend and new husband: the one thing they had in common was me
Writing and dog goals instead of quitting to bag groceries

An irreverent storyteller with a foul mouth and big heart, Kathryn Mayer (aka Kathy and/or Kate) is a writer, humorist, and (former) activist writing out loud with humor and grace about little life moments with big ripples, including the space between parenting and aging parents, social issues, angsty reflections of midlife, and, sigh, gun humpers. Still. Sometimes a big deal, sometimes not Mayer is a national award-winning columnist, according to the National Society of Newspaper Columnists, and her essays have been recognized as Voice of … END_OF_DOCUMENT_TOKEN_TO_BE_REPLACED