(This essay originally appeared on Grown & Flown where it was awarded SheKnows Media BlogHer Voice of the Year 2017.)

Left behind, but I couldn’t look away.  Her face was smooshed up against the scratched, opaque plastic, and seemed to be suffocating, for lack of air, lack of love, I don’t know, but I just left her there. If her mouth wasn’t sewn shut, if her little arms hadn’t lost all their fluff, maybe she’d fight this forced migration to the attic with the rest of the forgotten evidence. I snapped the top of the storage lid into place and silently apologized to the doll. 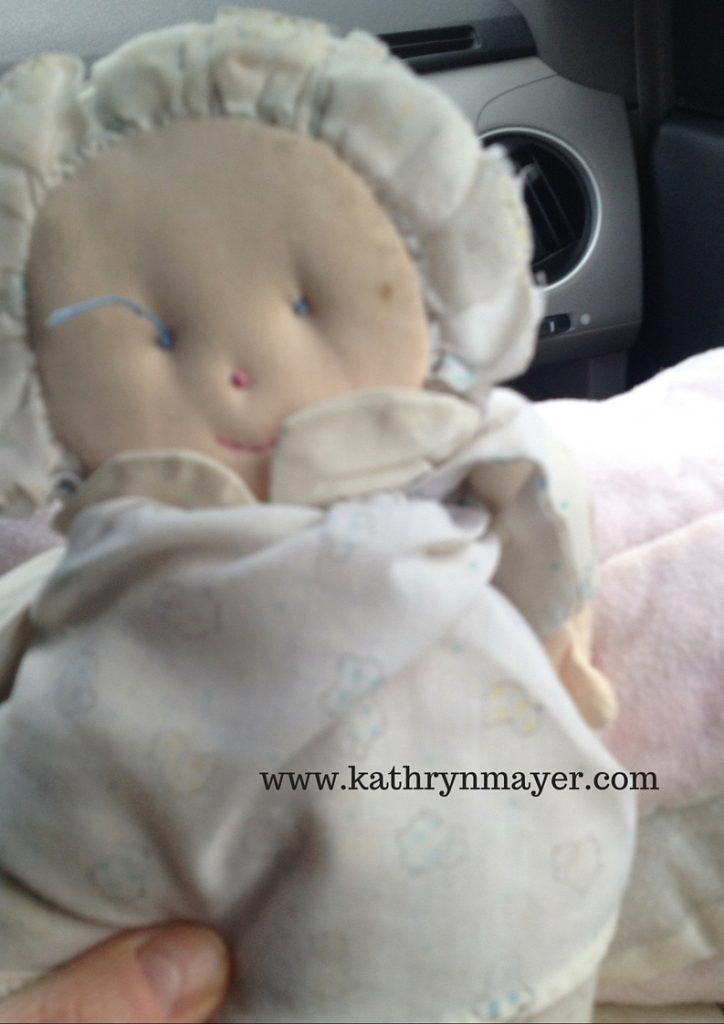 My daughter huffed her disgust while getting ready to leave. Again.

She yanked her little stuffed baby doll Bayba out of the duffle bag, tossing her onto her bed across the room where she landed amidst the pillows and stuffed menagerie of otters, hippos, and moose. The girl didn’t even hesitate; she just flipped the doll out of the bag and flung her towards the bed, where she spiraled, before landing with a muffled thuuup, face down, of course, in the pillows, so no one would hear her cross-stitch tears.

The girl was returning to college. She really only visited home now, brief stays before rushing off to someplace more important. I was getting used to saying goodbye. She called campus home. I pretended not to notice.

But Bayba, usually made the trip with her, this I knew. Once on campus, was banished in a backpack or hidden in a drawer or tucked away high on a closet shelf hidden in an old sweatshirt. But she always got to go. Except not this time.

The baby doll, faded and softened with maybe hundreds of midnight washes, the doll that had helped her get this far, become this woman, was being left behind.

“And I don’t need this either,” she said, and pulled out the Blankey I had shoved down deep into her bag, as a surprise from home when she unpacked later. Soft and pink, the satin edges worn from thumb sucking and it smelled delicious, like the silky soft spot on a baby’s head. At least to me.

All grown up, the once inseparable Bayba and Blankey went everywhere with the girl, but were now cast aside, like her favorite jeans that fit her one summer, but not the next, after that monster growth spurt in seventh grade, and yet she refused to throw away.

Outgrowing the stuffed animals that helped them navigate childhood

They were downsized first from center stage of a bedroom full of noise and secrets, to a hidden drawer in a college dorm, to the backseat, then trunk of her car, then finally home again, but a vastly different home; a quiet empty place void of the drama that made them the perfect antidote to growing up. These soft staples that gently stewarded their girl to adulthood, then were forced into retirement long before they were ready to go.

More than once at a bedroom purge, they’d end up in the Goodwill pile until rescued in the nick of time, not by the girl anxious to grow up, but by the mom, afraid to let go. Of her. Of them. Of all of it.

Packing away a childhood of love

Reluctantly, I took them to the attic, unfolding the attic stairs – the heat spilling out and hitting me in the face as I climbed up, waist high into the darkness, and reached for the nubby chain to pull on the single glaring bulb overhead. Behind the soccer trophies and sleeping bags, past the empty fish tank and golf clubs, I reached for the cracked and duct taped crate scrawled with black sharpie with the girl’s name, filled with construction paper hands and report cards and pasta necklaces and varsity letters, then carefully wrapped Bayba in the pink blanket and put them in the box, covering them things left behind before locking the lid into place.

And as the months rolled by and calendars rolled over, holiday by holiday the bin was pushed into the darkest cavern of the attic, being looked over for those boxes needed and wanted – for holidays, celebrations, and seasons. Farther and farther away, out of sight, out of reach, into the darkest corner of the attic cave.

I knew by her breath she was crying but said nothing.

Her usual tone, one easy to dismiss, a confident, condescending college demeanor revealed once she discovered she was so much wiser and smarter than her parents, was absent. Her voice steady and low, deliberate. Flat. Big empty spaces between words. She didn’t interrupt. Not once. She didn’t say much at all, the weight of what was not being said heavy on the line. She didn’t want me to know, how much she was hurting. But I knew. I am her mother.

It came as a whisper.

“Will you send them to me? Please? Bayba and Blankey? You know where they are?”

I could see Bayba’s loved off nose pressed against the clear cracked bin, safely cocooned in Blankey, the same blanket she came home from the hospital swaddled in 20 years earlier.

I can’t take this anymore.

Panic hijacked the words, taking them on unnatural twists and turns, making her beg for something she didn’t know she needed.

Of course, we do, babygirl, I tell her. I’ll overnight them both, not to worry. You’ll get them. You’ll have them soon, but listen tome: you need more. You need to talk to somebody, somebody real. You can’t do this alone. Let’s get you some help.

“Send them,” she sobbed, panic spilling out and splashing me from so far away. I was already on tiptoes, reaching high above with desperate fingers stretching for the dangling knot to whip down the attic cord, winding it tight around and around my hand and yanking the stairs down, so they accordioned open – whack-whack-whack rapid fire in one fast whush, and climbed up, pushing past the empty suitcases, broken cello, boxes of memories, knowing exactly where to go.

On hands and knees I crawled, banging my head on the rafters, stumbling over ice skates, crates of holidays, and like a pot of gold, there it was.

The top snapped off, and digging past the basketball jerseys, yearbooks, artwork and brownie vests, I found the little stuffed babydoll, not gently used but fiercely loved, protected by a soft pink blankey, and gently unwrapping her, with no complaint, not even one tear, she looked through me with her unblinking eyes, steadfast smile, and loyal heart, and told me: 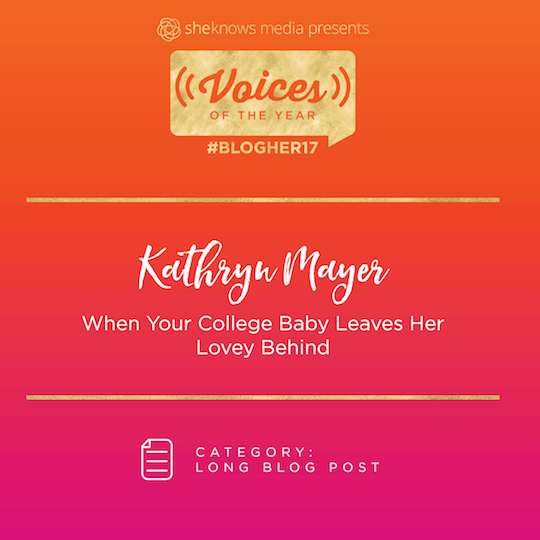 Postscript: What I didn’t include in the essay is that this all was a direct result of the Sandy Hook shooting, when my college kid far from home and isolated in her grief, began to unravel. I didn’t include the Newtown connection to show the universal connection, but share that with you now because you’re here. This essay originally appeared on Grown & Flown where it was awarded SheKnows Media BlogHer Voice of the Year 2017.

An irreverent storyteller with a foul mouth and big heart, Kathryn Mayer (aka Kathy and/or Kate) is a writer, humorist, and (former) activist writing out loud with humor and grace about little life moments with big ripples, including the space between parenting and aging parents, social issues, angsty reflections of midlife, and, sigh, gun humpers. Still. Sometimes a big deal, sometimes not Mayer is a national award-winning columnist, according to the National Society of Newspaper Columnists, and her essays have been recognized as Voice of … END_OF_DOCUMENT_TOKEN_TO_BE_REPLACED