Below is a writing prompt from June 2020: ‘what are you sick and tired of?’ One year ago my list was endless. This year, in honor of the 4th of July, I’m posting this look back to see how far we’ve come. Because we’ve come far. We have a long, long way to go, but we are moving in the right direction.

JUNE 17, 2020: I’m sick and tired of being sick and tired. I’m sick and tired of atrocity after atrocity, piling up as if the first weren’t bad enough. Thank you sir, may I have another. Like one school shooting isn’t enough, let’s mow down a classroom of 1st graders. Make that two classrooms. Rally the people, fight for safer gun laws, but wait – there’s more. Let’s arm the teachers, says the NRA. Let’s arm the regular people, people who can’t work a weedwhacker but now have unlimited access to unlimited weapons. But wait, there’s more: forget that gun control stuff, let’s elect a rapist in chief! Women? Who cares? Black people? Fuck ‘em, elect me, and I’ll make America great with coal and blockbuster and guns for all! Hang on, there’s more. You thought that was bad? Gonna put one of the good ol’ boys on the Supreme Court, to ensure the good ol’ boys stay in control, keeping those coal mines operating forever and ever. Remember when we thought that was bad news? It wasn’t. There’s more. Like treason. Fake news – like a toddler denying guilt with chocolate all over his mouth – “not me!” Liars! And kids in cages. They didn’t listen! And a school shooting a week, or a day, more guns, please. I’m just so tired. You think you can’t do this anymore. But wait – yes you can. For three easy payments of just blood, sweat, and tears – so many tears – let’s add a pretend pandemic – fake news for sure, as refrigerator trucks to hold the bodies of old people. Mass graves – in NEW YORK CITY. They’re old, who cares, the economy! What about the economy? No masks, STUPID SHEEP, they don’t work, fake news. More dead people.  Some people in Connecticut complained that a funeral home that installed storage units on their lot made a loud noise, humming all the time, the people complained. Called the news crews they did. How annoying, these giant refrigerator trucks. How inconvenient. THEY WERE COOLER CONTAINERS FOR BODIES. The neighbors didn’t like the sound they made; I wonder if they’d prefer the smell of the backlog of decomposing bodies? But Connecticut isn’t Florida. Thankfully. Oh, Florida. What the holy fuck Florida. I can’t take it anymore. New York nearly disappeared into depths of death and despair, but we rallied and we crushed them motherfucking curve and we did it for you AMERICA. Florida, I’m looking at you jackass. You coulda saved yourself. Florida, Texas, North Carolina. you dumb fucks. You cudda watched and learned. But fake news – and now oh Florida, you better order yourselves some refrigerator tractor-trailers. I’m so sick and tired of this – but not done yet. You think you can’t take anymore, and then those sworn to serve and protect crushed that man’s neck, killed him in the streets, cameras rolling, hands in pockets gloating. It’s not the first time. Not the last. Black boys committing “suicide” in trees in municipal parks. It’s not happening. It’s murder. It’s all murder. Where is Officer Friendly? Where exactly are these good apples? FAKE NEWS. And you were sick and tired and couldn’t take anymore, and now you’re marching in the streets, waving signs, shouting back – masked up to protect spit and snot droplets from poisoning each other but the masks are not strong enough to hold back the teargas trying to silence those unwilling to be silenced. I’m so sick and tired of being sick and tired, and wondering what’s. Next. What. Is. Next.  Next up? Can it get worse? Don’t say that out loud, don’t even think it. Because it can. It has. What’s next you wonder to yourself, masked and protected, but from what and from whom? Who are the good guys? Who are the bad guys? It’s a blur now, and I’m sick of it. And tired. So very tired. Make sure you vote for people who will protect and serve because I’m so sick and tired of being sick and tired. 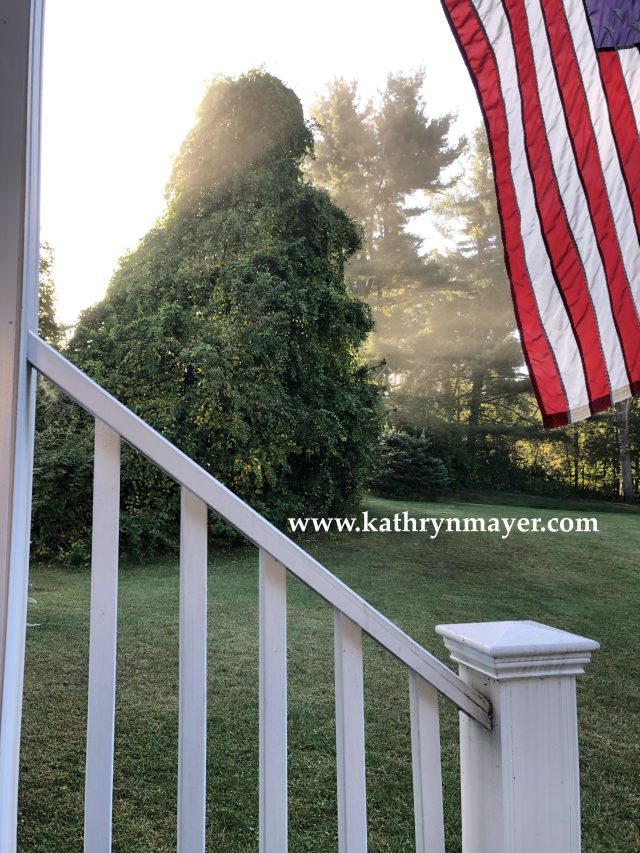 Get your freak on: the story of a first kiss
Always room for one more

An irreverent storyteller with a foul mouth and big heart, Kathryn Mayer (aka Kathy and/or Kate) is a writer, humorist, and (former) activist writing out loud with humor and grace about little life moments with big ripples, including the space between parenting and aging parents, social issues, angsty reflections of midlife, and, sigh, gun humpers. Still. Sometimes a big deal, sometimes not Mayer is a national award-winning columnist, according to the National Society of Newspaper Columnists, and her essays have been recognized as Voice of … END_OF_DOCUMENT_TOKEN_TO_BE_REPLACED