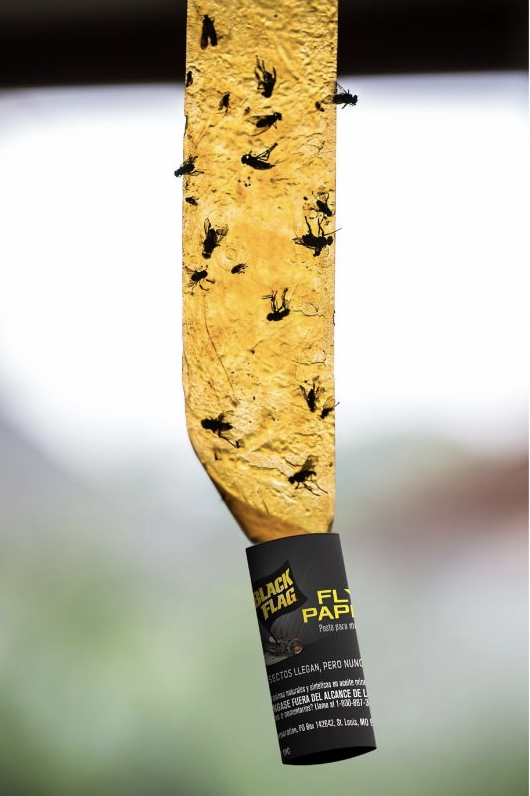 Flypaper dangles from the rafters of the barn, swaying in the breeze and sticking to my hair when I forget to duck away from it, and I am left to peel it off hair, shirt, or shoulders, leaving teeny-tiny fly body parts stuck to my clothes, fingers, and scalp, like corpse glitter long after the party is over.

The strips hang like toffee-colored party streamers, a ploy to attract pesky flies away from the horses, party fly traps, turning and twisting like a baby’s crib mobile, without the itsy-bitsy spider musical accompaniment. The slightest breeze gently sways them to and fro, whenever you walk by with or without a horse, and within days, sometimes hours, they are peppered with lost fly souls, those unfortunate enough to wander close enough to the sticky ribbons to catch a wing, an antennae, an itsy bitsy footie, then there their carcasses remain forever plastered, like a morbid game of twister gone horribly wrong.

The paper never sticks to the horses, I don’t know why, but hangs so close to their faces, the horse’s liquid eyes luring them close, then closer, and the flies can’t resist in the heat of the summer, kamakazi-ing toward the sleepy equine.

The horses are oblivious; their unsticky forelocks and tails lazy in their task, swishing flies away this way and that, like an oscillating fan, or maybe an empty coke bottle riding the waves at the shore, litter in, litter out, hoping to grasp onto the beach but flicked back out to sea with the tide.

Flypaper isn’t as kind as the manes and tails swishing, whisking them away, annoyingly, teasingly, so close and yet so far.

The flypaper means business — unforgiving and relentless in its duty.

And yet the horses sigh in the summertime heat, grateful for the shade of the barn, their big soft lips ripple with contentment, one then another, catching like a yawn, the sound off stall by stall, like waves crashing softly on the shore, while the massacre happens just overhead.

What attracts the flies to the flypaper?

Is it sex? Food? A death trap disguised as a rest-stop on their journey? 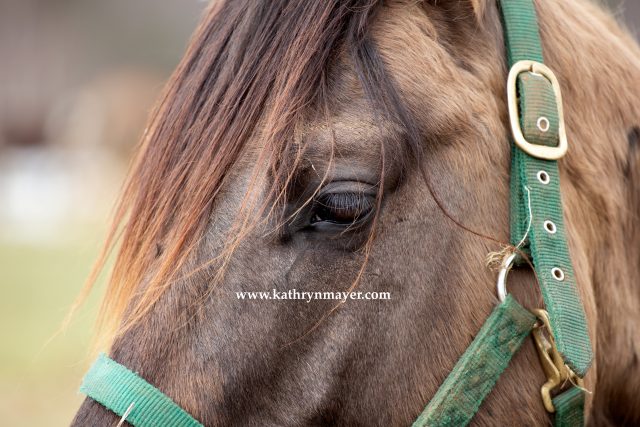 Is it the tackiness that attracts them to the flypaper, does it smell like fly pheromones so they think they’re getting lucky when they land on the brown tacky wet strips dangling from the front of every stall? Or do they happen to wander by and the teeny tip of [see=through] wing just barely grazes the sandtrap and WHAP they’re stuck, ripping their parts off trying to escape, or waiting for my hair to get stuck and my fingers to do the dismemberment for them.

Was it like a mousetrap – happenstance of who gets to live and die? An IQ test perhaps for the shit-loving, lazy buzz, the soundtrack of the barn which meant life, as well as death. The flies came first for the injured and hurting, sensing weakness or maybe just blood and puss. Did only the dumb ones get caught or was it an equal opportunity EZ Pass to extermination?

I don’t remember the smell, only the texture, the unrolling of the pesticide streamer, not wanting it to get stuck on itself, so it would spiral from the cobwebbed rafters above, barn rafters, real ones, holding up the hayloft above, framing the box and straight stalls below. Each stall with its own party pennant, high enough the horses and my head not to get our hair caught, low enough to let the space invaders know the bar was open, come on in.

Flypaper: a sign of spring and better times ahead

Flypaper was a sign of spring in the barn, of better weather ahead when the buckets wouldn’t freeze over and before the sun melted the manure pile and kept the horses huddled under the trees, jockeying for a piece of shade, tails sleepily waving the flies away, eyelids blinking fast, then slow before giving up, and letting the flies rest in the reservoir of their big, gracious pools of light.

Did we need the flypaper to keep the flies out or would the tails and long lashes have been enough? Did the flies bother the horses, or just us – firebombing our own eyes and ears, no mane or tail to keep them away. Either way, it’s a trap – use the paper or be the paper.

Was it suicide mission or murder? Or was whatever attracted them in the first place call more to the location – the way a dead carcass attracts one, then two, turkey vultures – and the word gets out, and there’s more for the taking.

The paper hangs in the barns, some deep and heavy, like fruit rolls ups dipped in syrup dancing in the air, waiting for the flies to find them.

Some so full of flies and little petrified pieces of fly carcasses in different stages of sedimentary preservation that they look like a mosaic wind chime without the angelic tinkering but instead dried crinkling, sparkling, and disgusting like a popsicle dropped in the sand at the beach. Salvageable, perhaps, until close up, you’re not aware of what you’re looking at, mostly because it’s too painful to see. 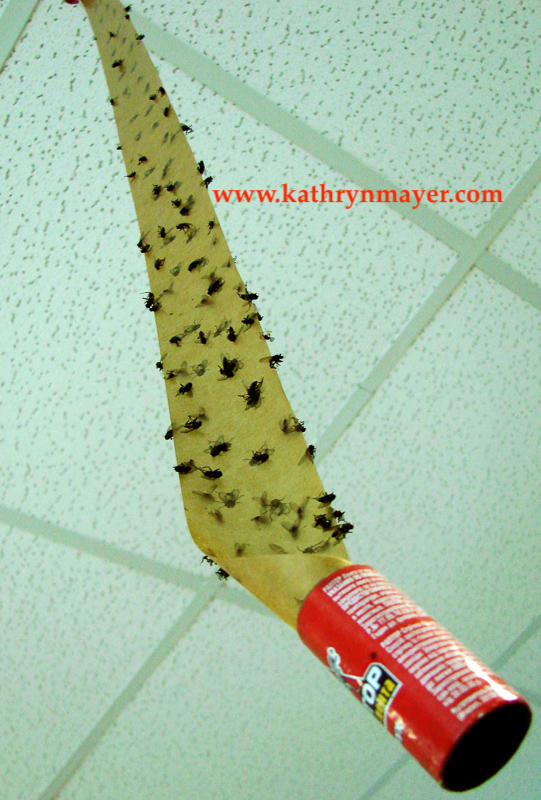 Maybe flypaper would have worked.

Maybe sticky tape in each and every room, blocking the windows and doors, not allowing him to escape — barn or no barn. To keep close what I didn’t want to leave in the first place, but instead of getting stuck in my hair, he ripped off his own wings and left me to unravel the paper that is stuck to itself in so many places, unable to unfold and unstick itself, like those plastic veggie bags in the produce aisle that you rub and rub and never seem to open, giving up the handful of green beans because your fingers don’t work and that bag just won’t open and you’re embarrassed to stand there in front of the zucchini and chard for one more minute. Not worth the effort.

Flypaper may have made him stay. Just a little bit longer.

Or perhaps it did – but it was me stuck in the glue, dangling in the space between the barn and home, stall and sky, my antennae broken, unable to sense the danger in my midst until years too late, then desperate, ripping off my own arms, legs, eyelashes, heart torn, insides disemboweled – detaching my head and watching the destruction from high above, stuck, unable to move, unwilling to give up — waiting for someone, something to wander by and let me hitchhike my way out of here, forever wishing for a horse to ride away on.

Whale Watching Sexism in the Sea
I remember

An irreverent storyteller with a foul mouth and big heart, Kathryn Mayer (aka Kathy and/or Kate) is a writer, humorist, and (former) activist writing out loud with humor and grace about little life moments with big ripples, including the space between parenting and aging parents, social issues, angsty reflections of midlife, and, sigh, gun humpers. Still. Sometimes a big deal, sometimes not Mayer is a national award-winning columnist, according to the National Society of Newspaper Columnists, and her essays have been recognized as Voice of … END_OF_DOCUMENT_TOKEN_TO_BE_REPLACED