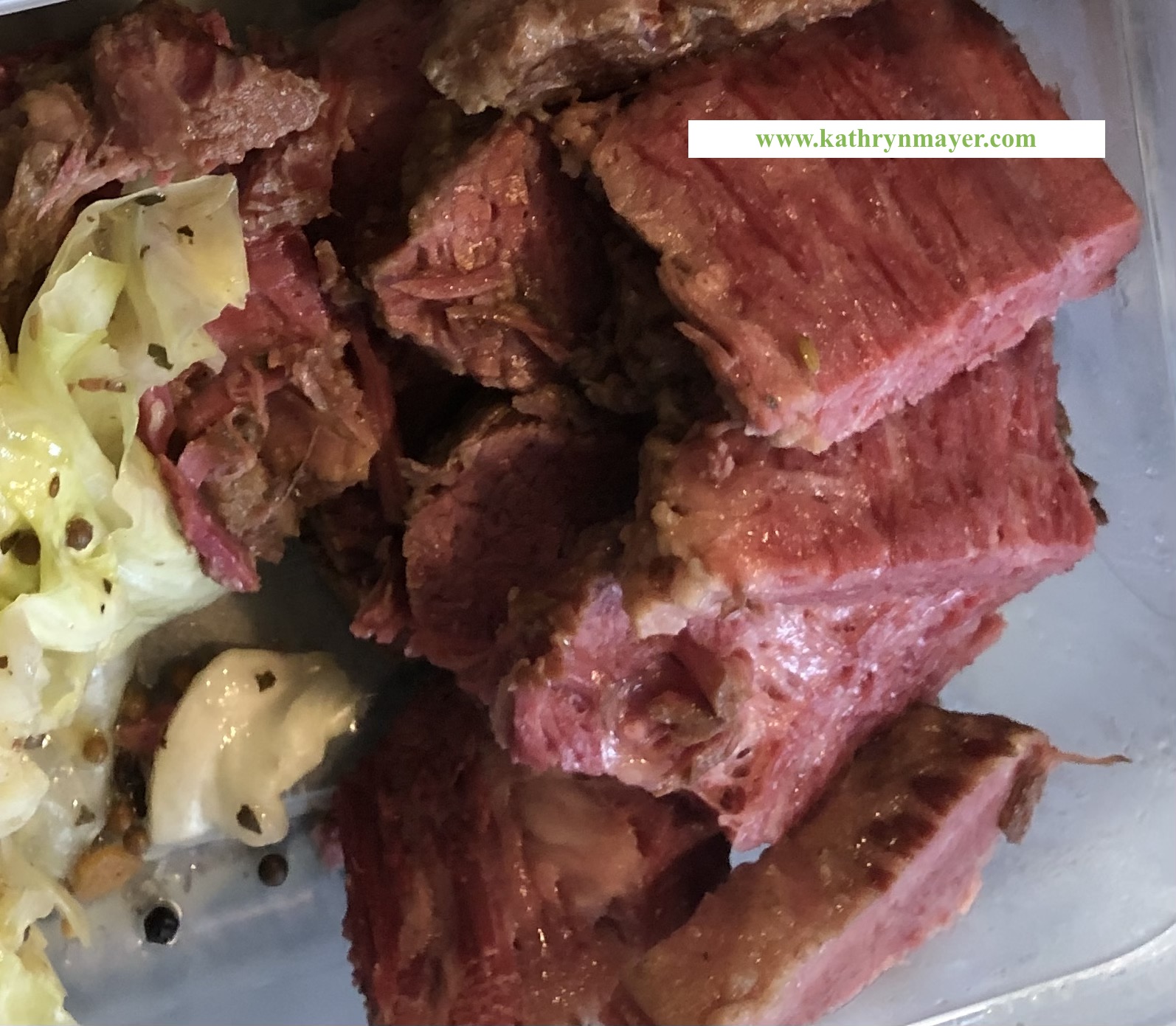 Boiled meat is nothing to be proud of, but that doesn’t stop people that I love from dumping a half hock of some sort of pink – very pink – wilderbeast, a mammal of some sort, I think, into a lobster pot –– OH THE BLASPHEMY – dumping a mystery-meat shrink-wrapped slab of what looks to be my Costco-strong, not orange theory strong mom-thigh, dimpled overly exposed supersized thunder thigh left too long in the sun on the first good beach day. Pink. Dimpled. Stringy. Thick and soft. With a little Ziploc bag of ecstasy-level street “spices” included for “free.” Dump it into the lobster pot and boil it for much of the day.

Who thinks of this shit?

Corned beef and cabbage. prove it’s beef. I dare you. A cow. Bovine. Moo. Corned Cows. I’ll fight you. There’s no such thing. There’re no pink cows wandering around, spotting the landscapes and farms of upstate New York or ponderosas of Montana. Nothing pink killed and grilled. 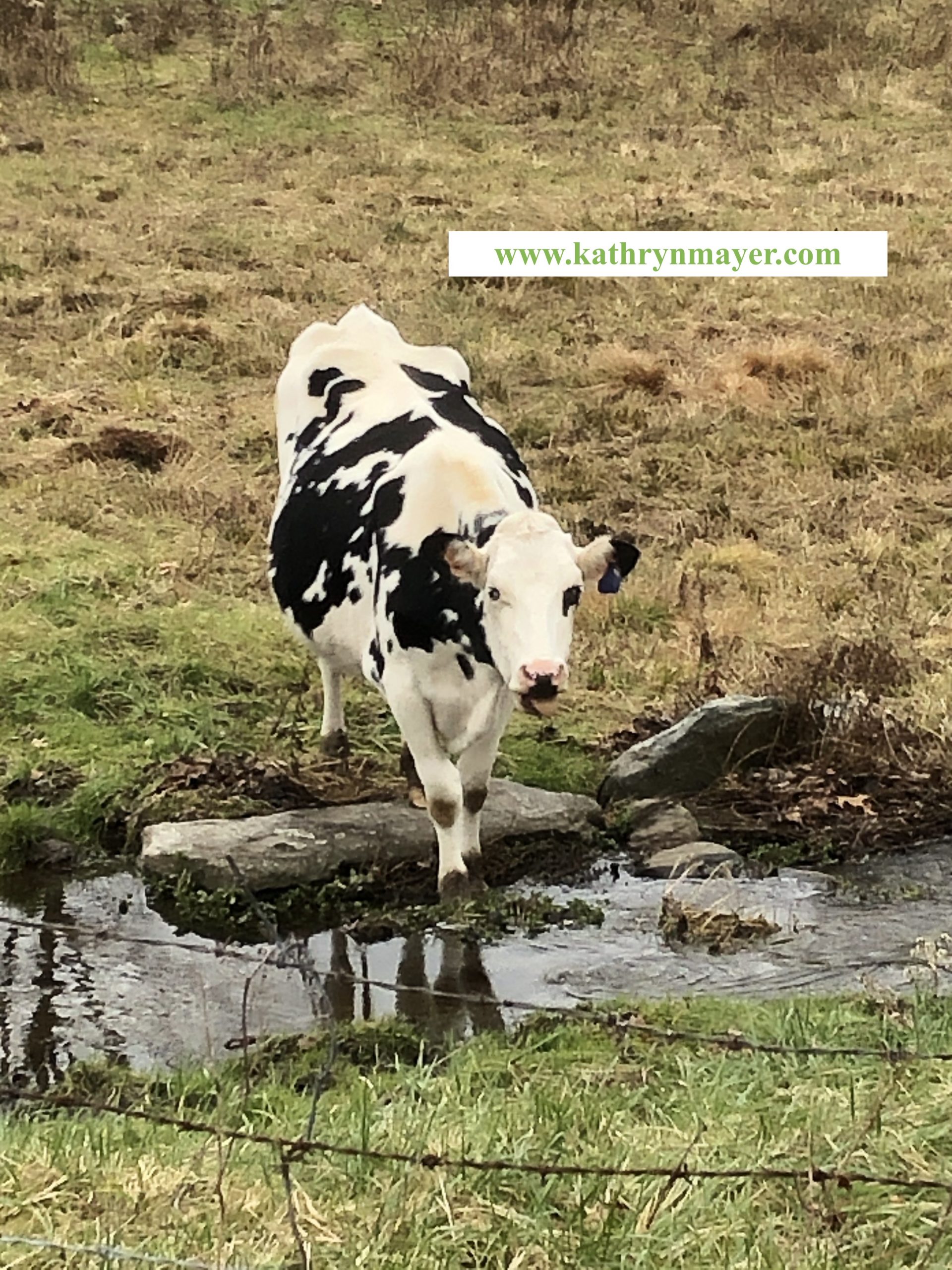 I’m not Irish, even though everyone says they’re a little bit Irish, my Great Grandma Duffy is just a name on a family tree, and we inherited nothing from this branch, so little even Ancestory.com might out me as a fraud. Especially when they discover I’ve been avoiding boiled meat du jour since St. Patrick’s Day circa 1970something.

That’s when I became best friends with Jolene Irish Catholic Murphy*, whose dad looked like a giant leprechaun himself, and they had 9 kids, all ending in -een, except the boys, Patrick and Sean. So they’re Irish Irish, and Jolene was my best friend from 2nd grade until she left her vagina on my computer some 30 years later but that’s another story.

Jolene’s house reeked of boiled meat all of March as I recall, making me gag when we spilled off the bus and headed up her driveway. From 20 yards away the gag reflex began the day of, and for days after, so I avoided her house until the forsythia faded, until the smell could be shaken like old farts from the curtains.

The Methodist church, the congregation we belonged to but seldom went to, in my tiny town had a Corned Beef and Cabbage dinner on St. Patrick’s Day, this is how funds were raised in the days of yore, and for my very few church-going years, this place too made me gag, but I didn’t love anyone there, not like at the Murphy’s, so I didn’t this was an easy no, unless I was still young enough to be shoved into the back of a Datsun Dasher and made to go and smile. Didn’t have to eat it, but the smell – it was getting in either way.

In high school, I loved LOVED Kenny, a muscle-bound super jock ripped with braces and muscles, so handsome and out of my league, but for some reason he loved me too, or liked me enough to try to touch my boobs. I was ALL IN, but he was hesitant and scared and never would have wanted me to leave my vagina on his computer if computers were a thing which they were not. But I wouldn’t have even if they were. But Jolene might have. She was much more adventurous than me.

In love with an Irish Immigrant’s son, but not her food 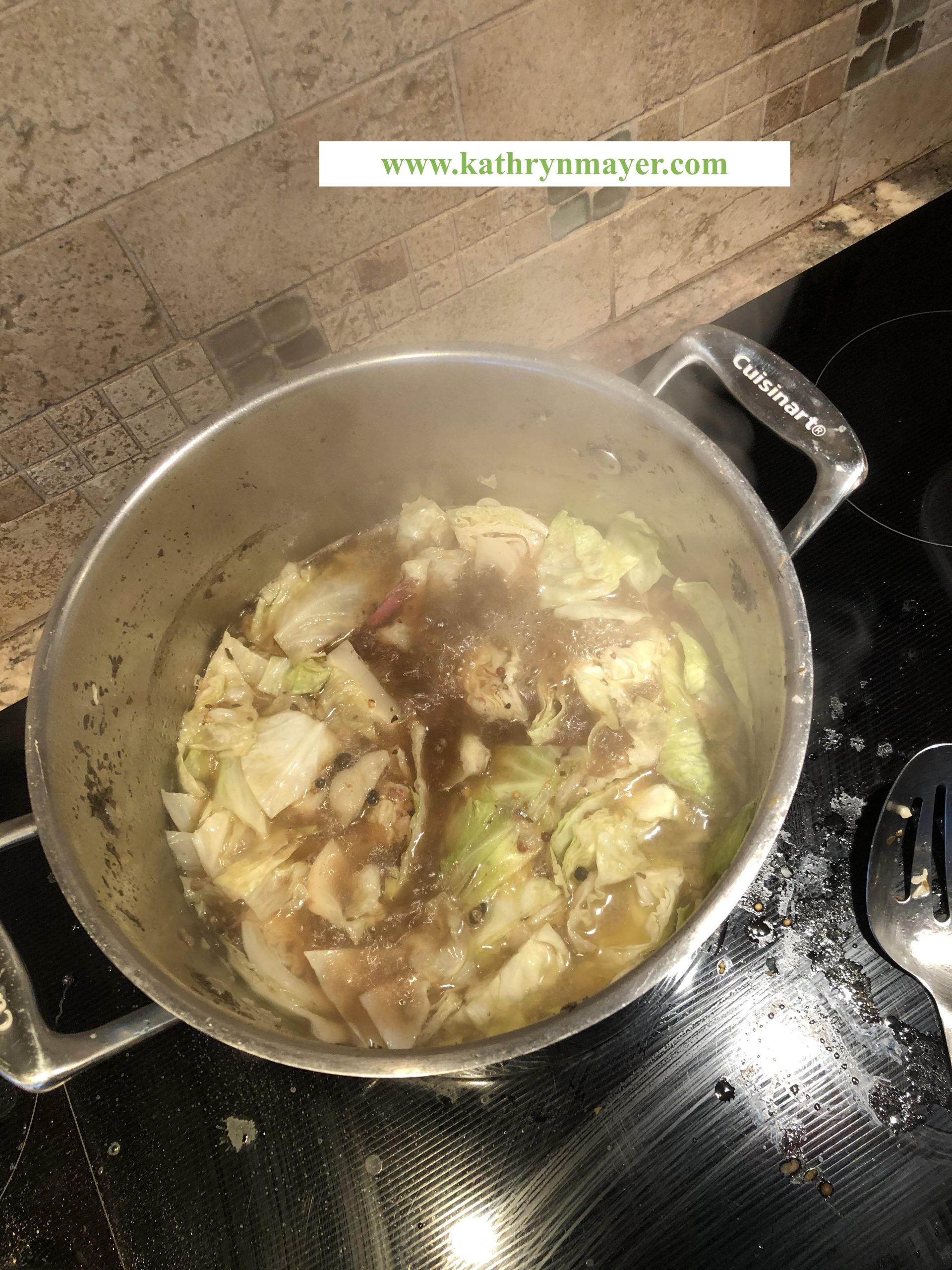 Anyways, Kenny’s mom was what my mom called, Off-the-boat Irish. I thought this was an insult, so I asked her, one day, perched at the kitchen table watching her sashay between the stove and table, talking to me like I was important, and not just bewitched by her magical son. She could do no wrong because in high school you love your boyfriend’s mom way more than your old boring mean, unfair vicious bitch mom, especially when she had the most amazing accent, and she told me yes, she did indeed come here on a boat, to clean houses, when she was just 17.

SEVENTEEN. I was seventeen and couldn’t drive after dark.

And she too boiled meat on St. Patrick’s Day, but I loved her and wanted her to love me, so sat there, and tried to eat it, really I did, but for the love of all things Irish, why do they boil the meat and why does it smell so bad.

She notices my nostrils sucking into themselves and my facial cringe and says, “It’s the cabbage, Kathy, not the meat” and continues to daintily cut the pretty pink shredded flesh and dip it into buttery mustard, lift it to her perfect mouth then and chew with a heavenly smile, even though there is no chewing necessary.

And I smile, as my parents taught me to, and sit down at their table, napkin on my lap, and my handsome boyfriend shovels a heap on my plate. Too much, too much, I doth protest before remembering: manners. Remember your manners, I hear my mom in perpetuity.

I take a bite. A tiny bite. Chew. Smile. It’s sweating in my mouth. It feels like my tongue is disconnected from my mouth. I swallow. Hard to swallow whole but slimy enough it doesn’t stick in my throat. I eat it. But hate every teeny-tiny bite, even the potatoes swimming in butter, because they too have corned beef cooties, and the cabbage melts like plastic wrap on my plate. It smells. It’s gross. And I can’t escape it.

It’s everywhere, doesn’t matter how beautiful the accent or the boy, I can’t escape it. I couldn’t wait to get home and wash that nasty ass Irish smell out off my hands and face and out of my hair.

Until next year, when I hope with the luck of the Irish it will be different but know in all likelihood, it will not.

Prompt: Write about the smell of food cooked by someone you love (june 2020 Kimberly Bliss NYWC)

*Names have been changed, sort of.

An irreverent storyteller with a foul mouth and big heart, Kathryn Mayer (aka Kathy and/or Kate) is a writer, humorist, and (former) activist writing out loud with humor and grace about little life moments with big ripples, including the space between parenting and aging parents, social issues, angsty reflections of midlife, and, sigh, gun humpers. Still. Sometimes a big deal, sometimes not Mayer is a national award-winning columnist, according to the National Society of Newspaper Columnists, and her essays have been recognized as Voice of … END_OF_DOCUMENT_TOKEN_TO_BE_REPLACED