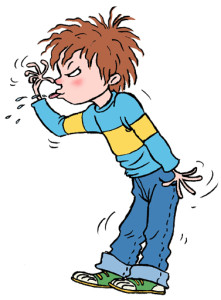 Not very festive, is it?

Went to Boy’s fancy-pants travel basketball game, which for those of you without ball scratching sports obsessed 12 year old, it’s when you pay lots of money to drive all over the state to play kids of equal caliber of supreme athletic ability, ignoring friends, family and work commitments for most of the “season.”

This particular game was down-county, about five tax brackets away, where the moms all look alike and the dads show up in shiny European loafer type shoes. I am county-profiling, make no mistake about it.

We do not belong.

And not for nothing, their kids play some kick-ass hoops and wallop our butts ever single time we make the $400,000 drive out of our timezone.

We do really, truly do not belong.

But fart noises are universal, and apparently, they fart even on the richer, top 1% of the pay scale, part of the state.

So when our big guy went to take his well deserved foul shot, a little spawn of the rich and affluent let a fart noise rip.

He must have been about 6, and really, farts are funny at 46, so they’re really, really funny at 6. But as he continued to blow raspberries into the silent gym, no one, except the ref, asked him to stop.

I trotted my Costco wearing ass over to the little Richie Rich and whispered, “Dude, farts are sooooo funny! But could you pretty pretty please not make those noises when they’re shooting foul shots? It’s unsportsmanship-like. You know, kinda mean.”

“Let ’em rip when they’re playing, but let’s pinky-swear to be quiet during foul shots, cool?”

Until later, when his Dad yelled down the sideline to his mini-me:

This solidifies my extensive market research of 19 years of parenting that there are no bad kids, just bad parents. And bad parenting has no income cap at all.

PS: And the moms all down there should stay out of the sun and for god’s sake have a burger. Or a little eggnog or somethin’.

An irreverent storyteller with a foul mouth and big heart, Kathryn Mayer (aka Kathy and/or Kate) is a writer, humorist, and (former) activist writing out loud with humor and grace about little life moments with big ripples, including the space between parenting and aging parents, social issues, angsty reflections of midlife, and, sigh, gun humpers. Still. Sometimes a big deal, sometimes not Mayer is a national award-winning columnist, according to the National Society of Newspaper Columnists, and her essays have been recognized as Voice of … END_OF_DOCUMENT_TOKEN_TO_BE_REPLACED