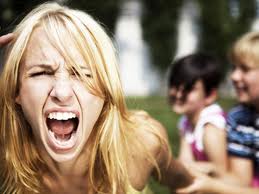 I missed the whole thing.

I stayed home to make sure teenagers didn’t have sex on my couch, while rather attractive husband took Boy to the soccer tournament 4 hours away where these extraordinary, highly-scouted 12 year old phenoms need to travel to find any competition worth playing.

(That’s the official statement. My version is we get our ass kicked by the locals, so must drive far to end the season on a high note.)

But apparently two of our soccer moms went nose-to-nose with a YOU’RE A BITCH vs. YOU’RE A F*C$(#*G BITCH spit fest smack down and I MISSED THE WHOLE THING.

I don’t know if one is banging the other’s; if somebody forgot their Xanax, if it’s a family, soccer, school, kid, mental illness, coaching, PTA, booze, oxy, or town issue. I don’t know the build-up, background, storyline. I have no juicy details, no truths, no half-truths, no gossip, no nothing. Because I was not there and men don’t ask questions.

Thing is, that could have been, should have been me. Except rather attractive husband saved my ass 2 years ago when we realized soccer wasn’t a fad Boy would grow out of.

Instead of sitting in the beach-chair lineup on the sideline, I always sat behind the goal, in the shade, often with a book, away from the normal parents. Alone. Away from the running commentary that makes it difficult for me to keep my inside thoughts inside. It was far better that way.

Until my rather attractive husband did the math.

RAH: “Get up now and go sit your ass down with the other parents. Make friends. We have at least 7-10 years of spending every single weekend with these people. Go be nice.” 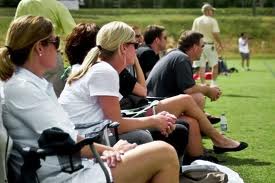 So I put down my book, picked up my iced coffee, and went, sat down, and played nice.

And made some pretty good friends, and a couple enemies, but so far, no one has screamed in my face about what a bitch I am, but that’s probably because they don’t read this blog.

Bedroom Makeovers: When Teens Want Their Own Room
Summertime Daughter Grows Up

An irreverent storyteller with a foul mouth and big heart, Kathryn Mayer (aka Kathy and/or Kate) is a writer, humorist, and (former) activist writing out loud with humor and grace about little life moments with big ripples, including the space between parenting and aging parents, social issues, angsty reflections of midlife, and, sigh, gun humpers. Still. Sometimes a big deal, sometimes not Mayer is a national award-winning columnist, according to the National Society of Newspaper Columnists, and her essays have been recognized as Voice of … END_OF_DOCUMENT_TOKEN_TO_BE_REPLACED