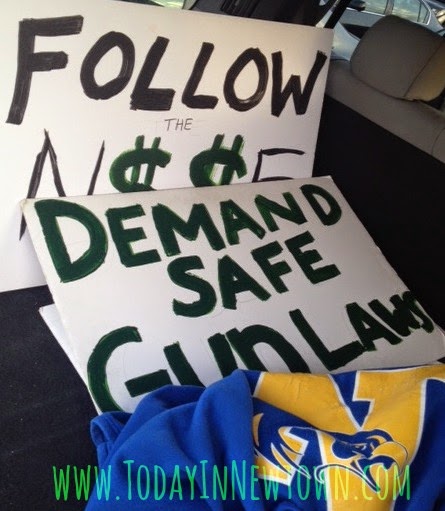 Since the shooting at Sandy Hook, every so often a few of us gather outside our friendly, neighborhood trade association representing the firearm and ammunition industry (aka gun manufacturers), the National Shooting Sports Foundation (NSSF).

We’re a small group of 3, 4, or 5 protestors, spanning several generations. Sometimes we surge to 10 or 15, but not often. We carry handmade signs that promote accountability, responsibility. Scary stuff to the industry.

Background checks. Being a gun sense voter. Being a good neighbor. Supporting CDC research. Exposing NSSF as the lobbyists they are, the power they wield, with the goal to out them as a non-empathetic, not-so-friendly neighbor here in Newtown.

After the Santa Barbara Shooting (but before the Seattle Pacific University and Reynolds High School shooting – land of the free, home of the brave, huh?), over 20 locals showed up carrying #NotOneMore signs to pay respects to grieving dad Richard Martinez.

Our beloved local paper even did a story about us. (NEVER read the comments.)

Why do it? Why stand there against immeasurable odds waving signs at passersby?

Because when one truck pulls over to defend their hunting rights, and pulls away with a smile and wave and a friendly, “I can live with that,” we think, can’t we all.

When a young vet, two weeks home from Afghanistan, pulls over to politely argue his absolute, Constitutional right for weapons, then concedes the average guy shouldn’t have access to the same stash he’s been diligently trained on for battle, and leaves shaking my hand. “I’m so sorry for your loss,” he mumbled, walking away. “I’m so sorry.”

“Well, at least we gave him something to think about,” said Katie, a teacher, mom, and original NSSF protestor.

When someone asks why are you there? What is that place anyways? What do they do?

What does it matter? What do you want?

I tell them, and they are always – always – surprised. Even all these months later.

So I stand, waving a sign, and friends, neighbors, strangers drive by. Waving, honking, smiling support. Some flip us off. A few slow down, stare. Two made a gun with their fingers, and pulled the pretend trigger at my face while looking me directly in the eyes.

I did not blink.

My signs creates awareness, nothing more. I’m a real-live meme you can honk, wave, and point at, shedding light on my hometown, and a national nemesis to public safety: our Newtown neighbor NSSF, who continues to do nothing to help prevent the gun violence epidemic that killed two classrooms of kids just over the hill.

I stand there so people discover the great and powerful Oz behind the gun culture that is killing our kids and creating a nation of fear and paranoia – conveniently disguised as freedom.

I stand there so maybe, just maybe, just one person will think twice before the next election, and make a conscious decision about who they want representing them from, all the way from school boards to senate seats. Because they make the laws.

Not one more preventable death, and not one more elected official in the pockets of those whom benefit most from the American obsession of arming ourselves to death.

So I’m holding my sign, wearing a MomsDemand shirt, hoping people will take notice and look a little deeper at themselves and at those they elect to make decisions and laws on our behalf. The NSSF and NRA are doing so, and it’s time we did so as well.

They Came, They Listened, They’ll Vote
A Blog Grows Up: The Big Switcharoo Begins

An irreverent storyteller with a foul mouth and big heart, Kathryn Mayer (aka Kathy and/or Kate) is a writer, humorist, and (former) activist writing out loud with humor and grace about little life moments with big ripples, including the space between parenting and aging parents, social issues, angsty reflections of midlife, and, sigh, gun humpers. Still. Sometimes a big deal, sometimes not Mayer is a national award-winning columnist, according to the National Society of Newspaper Columnists, and her essays have been recognized as Voice of … END_OF_DOCUMENT_TOKEN_TO_BE_REPLACED