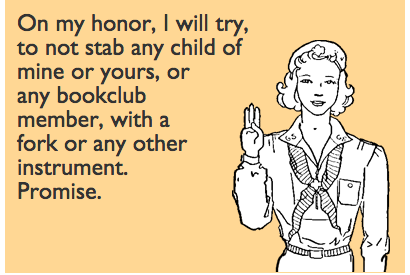 At a meeting of the female minds, (a smartypants book club of wickedly smart women … and me) it was with great apprehension, but not much delay, that I broke my own personal protocol of fake-it-until-I-make-it, when someone kindly asked about my darling teenage daughter. A bit too quickly, I revealed with much enthusiasm, how much I wanted to stab the little bitch with a fork.

“She’s such a brat! All the time! Selfish, miserable beast! Muttering and giving ME the stink eye over everything! Eye-rolling, foot-stomping, door-slamming – we took the door right off its hinges! I could seriously stab her. Frickin’ little brat, I could stab her with a frickin’ fork. Can’t stand her.”

Most were not surprised at this outburst, as I was often not the most poised person in attendance.

One friend abruptly placed her wine glass down, cleared her throat, turned, and arms crossed across her chest, glared at me:

“Kate, it makes me physically uncomfortable to hear you talk so violently about your daughter. I know her. She is quite frankly, a gem. I’m physically disturbed at what you say and how you say it. She is a young girl, and you should not speak like this, it’s not right. She deserves your respect, you owe her at least that much.”

Rage and embarrassment rushed up my neck and pooled in my ears. I heard nothing but roaring blood. But before I could fathom a response and (gulp) apology (??) for offending this woman, another voice spoke up.

“With all due respect, Melanie, you need to shut the fuck up.”

The room got quiet real fast. This was not an f-bomb dropping woman, this was a kinder, quieter, calmer mom who I greatly admire and have zero in common with.

“You have 2 BOYS. BOYS. You have absolutely NO idea what it’s like to have a teenage girl in your house – and Kate’s got three. So, with all due respect: SHUT. UP. You have no clue the beasts these girls become with little to no warning. No clue whatsoever.”

When a word is not what it seems, and you gotta tell her
Hurting in Newtown (repost)

An irreverent storyteller with a foul mouth and big heart, Kathryn Mayer (aka Kathy and/or Kate) is a writer, humorist, and (former) activist writing out loud with humor and grace about little life moments with big ripples, including the space between parenting and aging parents, social issues, angsty reflections of midlife, and, sigh, gun humpers. Still. Sometimes a big deal, sometimes not Mayer is a national award-winning columnist, according to the National Society of Newspaper Columnists, and her essays have been recognized as Voice of … END_OF_DOCUMENT_TOKEN_TO_BE_REPLACED