Every time I hear the bells of the ice cream truck, I smell fish.

It’s a primal response really, and it’s not a bad smell, like rotting fish in the sand dunes melting in the summer sun.

More like a ‘we’re getting a babysitter and going out; fishsticks for dinner’ smell of my very early childhood.

When I was a newlywed living in the good section of a bad city, the ice cream truck visited my street, which was the very best part of living there. Growing up in the country, there were no ice cream trucks like you see on tv or in the movies. No Good Humor, Mister Softee or anything in between. It just wasn’t worth the gas mileage to get from house to house in hopes of finding one or two takers, and parents willing to fork over the dough.

So when I first heard the bells, I bounded down the stairs and flew out the door when the ice cream truck came up the street those warm summer nights where we owned our first home in Bridgeport, Connecticut.

But then it hit me. The distinct whiff of fish sticks.

Before my parents moved to the rural country bumpkin – what’s zoning? – small town where I grew up, they too were newlyweds and new parents of moí, and lived in affordable, side walked, suburbia America, with young families, street lights, kick ball, and ice cream trucks.

I was just a little thing, 4 or 5 maybe, and the jingle of bells singled bedtime. My dad whisked me off the street and carried me into the house, slung over his shoulder face down in his back, while the other kids ran home to get money for – what?

“Here comes the fish truck,” my dad said. “Late supper for those kids; they must be starving!”

Apparently I believed him; and fish was cemented into my muscle memory. Or at least my nose-hole memory. 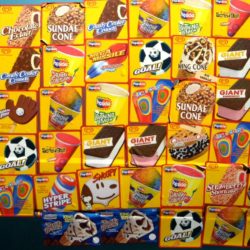 A ga-zillion years later when their baby became a newlywed, my own parents sat on the stoop of our first home on side-walked lined streets where kids played in the middle of the road, and the ice cream truck rounded the corner and blasted the familiar jingle, sending the kickball players scurrying back to their respective homes, begging money for the promise of frozen treats: soft-whipped cherry dips, frozen spider mans, ninja turtles with a gum-ball nose, big sundae cups, red, white & blue bomb pops that melt down your wrist to your elbow, orange dreamy creamsicles, drumsticks, fudgesicles, and push-up pops. You’re never too old for an ice cream truck treat. It was why we moved here. So delicious, yet still so fishy.

My parents were stoop sitting, watching the action unfold when I came out to greet the truck, money in hand, ready to treat my parents to a taste of city living.

Without me saying a word, my mom said, “Oh, look, a fish truck!” and my father laughed a booming laugh, as the music blared from the white truck tattooed with colorful stickers of promises frozen inside, which tricked my nose, made my mouth water, and my heart remember.

When is a child too old for stuffed animals?
A woman’s place: growing up feminist

An irreverent storyteller with a foul mouth and big heart, Kathryn Mayer (aka Kathy and/or Kate) is a writer, humorist, and (former) activist writing out loud with humor and grace about little life moments with big ripples, including the space between parenting and aging parents, social issues, angsty reflections of midlife, and, sigh, gun humpers. Still. Sometimes a big deal, sometimes not Mayer is a national award-winning columnist, according to the National Society of Newspaper Columnists, and her essays have been recognized as Voice of … END_OF_DOCUMENT_TOKEN_TO_BE_REPLACED