I can’t write much about the pussy grabbing misogynistic racist running for president, but Election Day is looming, so here it goes, even though it hurts my heart, brain, and vagina to do so.

I want him to lose and go away, far, far away, and then I want HRC’s primary focus to be education so that perhaps our electorate will learn enough to know when an evil person is force-feeding intolerable notions that are in fact, deplorable, and encouraging explicable acts that will harm Americans first, with global repercussions a short second.

For me, if Election Day does not reveal an overwhelming, like color the entire placemat blue, victory, then it’s a loss for all of us. If so many people find the other option acceptable, that it’s a tight race, and willingly follow and vote our nation into a dark crevasse that is easy to fall into, and will prove difficult, if not impossible, to crawl out of.

There is so much that keeps me up at night, even more so as Election Day looms closer, but here is what has me seething on a regular basis.

And it’s not what DT has said or done, but rather the response of his opposers, that’s right. My own teammates are pissing me off and here’s why.

I hate the vast commentators, both male, female, and gender non-conforming (see, I was listening at BinderCon), who are placing a feather in their cap and denouncing He-Who-Shall-Not-Be-Named and it’s not Voldemort, because they have a wife, sister, mother, grandmother, and the belles of the ball: daughters.

Like that is the reason why they can’t vote for the GOP candidate.

Good people denouncing violence against women for the wrong reasons:

• I owe it to my daughters never to support such a vile candidate.

• I could never support DT and look my wife in the eye.

• Of course I don’t support (what he said). I have girls.

• Calling all dads of girls: we can’t let him be president

• I would never support someone who threatened my wife or daughter

I wish, instead, it was because of his entitled violence against women as people, not because of a close association to the male voter.

It’s not enough to find his pussy grabbing because he can comments threatening and violent (they are far from insulting, they are threats of assault) because you have a daughter-mom-wife-niece-cousin-VIP female in your life. 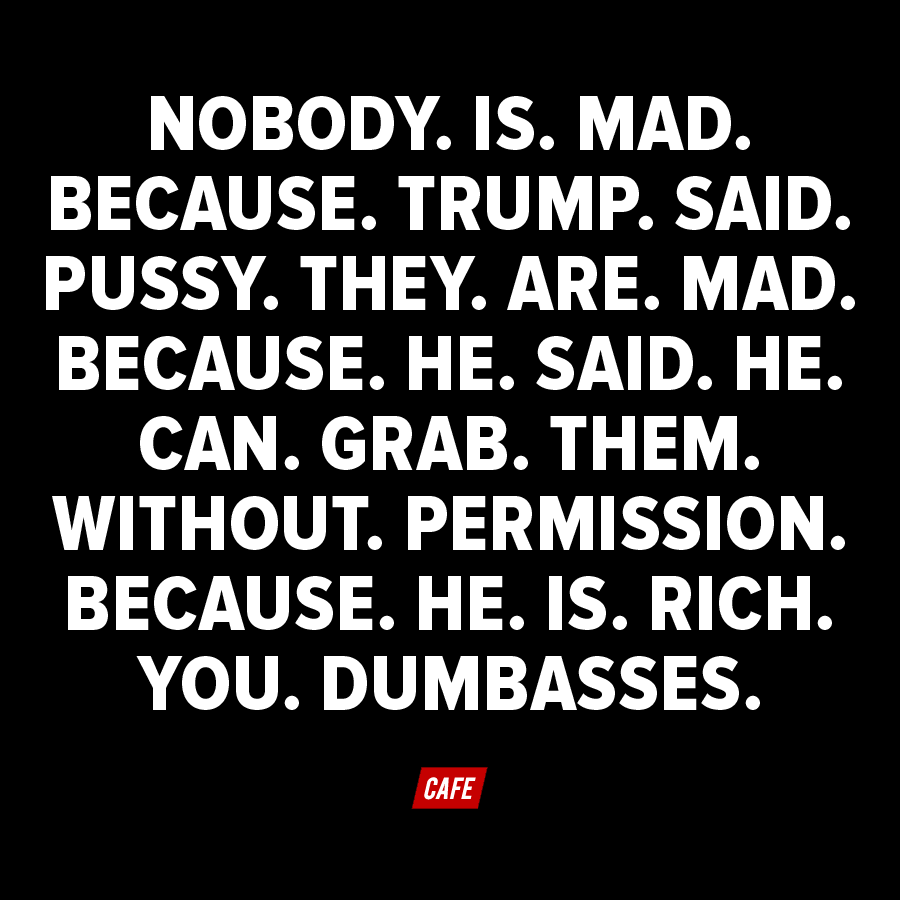 These comments are inexcusable and deplorable because we are humans. All of us. Together. And violence incited against one gender is violence against all genders, and that is why you should be against any entitled pussy grabbing candidate.

Not for your daughter, or your wife, or your mom, but for your own soul and conscience and a future you want to live in, not run from.

Violence against women masked as just another day at the office reminds us, as if we could ever forget, that us girls, we’re secondary citizens. And WOC (women of color) struggle much more today, and in a He-Who-Shall-Not-Be-Named’s presidency, would be invisible. Or worse, disposable. Then of course, small breasted women, or bleeding women, or breast-feeding women, or fat women, we, well, you know what he said about all of us. He’s famous. He can say what he wants. Grab what he wants. We expect it.

Sadly, we do expect it, but not usually from the President of the United States wannabe. From him/her, we expect more. And hopefully, Election Day, we get it.

PS: Here’s a brilliant take, from another vagina with a brain, ICYMI.

An irreverent storyteller with a foul mouth and big heart, Kathryn Mayer (aka Kathy and/or Kate) is a writer, humorist, and (former) activist writing out loud with humor and grace about little life moments with big ripples, including the space between parenting and aging parents, social issues, angsty reflections of midlife, and, sigh, gun humpers. Still. Sometimes a big deal, sometimes not Mayer is a national award-winning columnist, according to the National Society of Newspaper Columnists, and her essays have been recognized as Voice of … END_OF_DOCUMENT_TOKEN_TO_BE_REPLACED