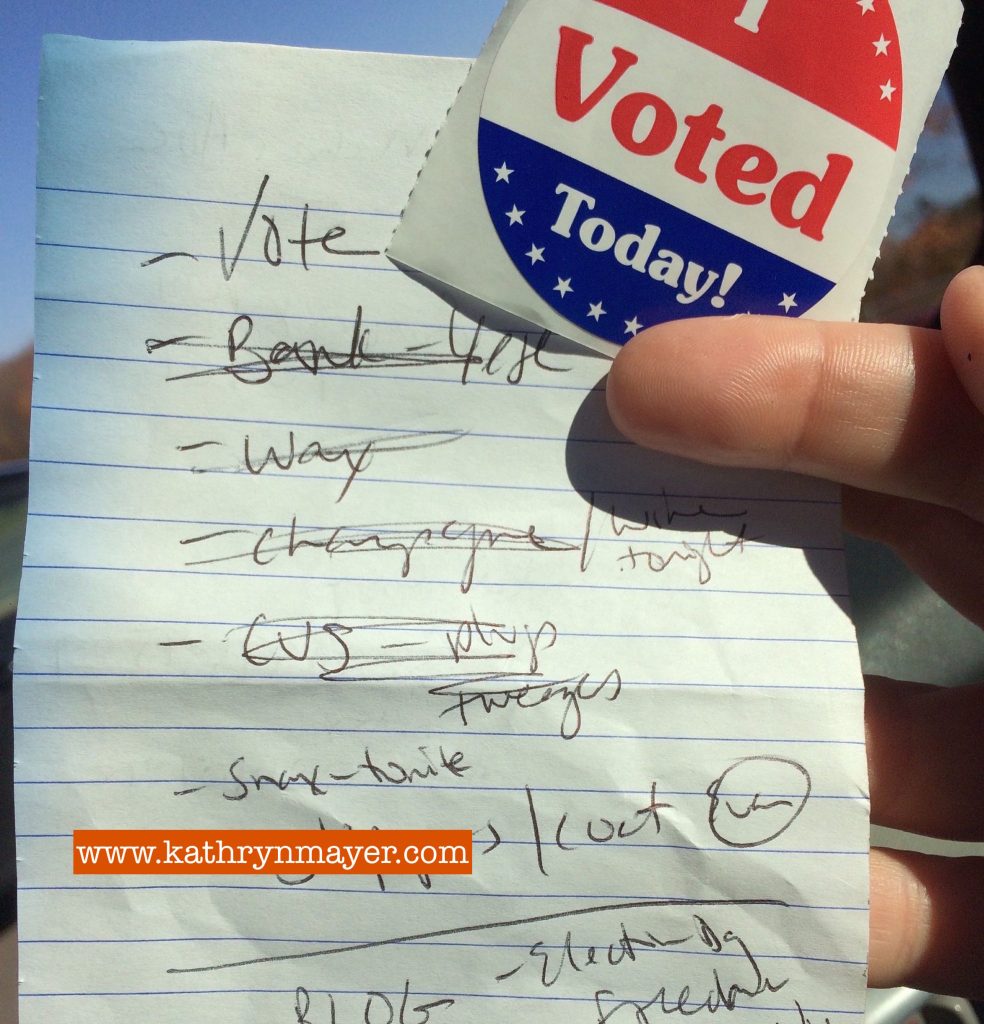 Last year, I grabbed my to-do list on Election Day, and headed out to town to get it done, and the order in which I did them was more than a little embarrassing.

Lists are awesome;  the sense of accomplishment when you have something to show for your day. I’ve been known to write down completed tasks, just to have the satisfaction of crossing them off.

Doesn’t everybody do that?

Last year, however, I made a grave error, as noted in this photographic evidence.

HINT: it’s not that I then posted this list on Instagram with plugs (tampons) and tweezers for the world to see.

Can you spot it?

When you live in a small(ish) town like Newtown and have a boatload of kids, and work in the community, and think out loud and share too much, it’s hard to go anywhere and not know somebody.

On Election Day, even in during an “off-year,” when there’s nobody vying for the White House, you’re going to see people you know. Or know your kids. Or your fam.

You might even have people know you via your blog, who you don’t even know know you. I have such a bigly following, half of whom are teenagers I’m related to, it’s bound to happen. Except, eh-hem, since posting daily this month as a part of NaBloPoMo (National Blog Posting Month), every day I’ve lost a subscriber! Not part of the original plan! Sign up, help a writer out!

So, word to the wise. This year, if waxing is your Election Day to-do list, do it AFTER you go to the polls.

Because while I can explain away the stories I write to the people I see at the polls, it’s harder to avoid their uncomfortable glares at the red welts leading from my lip to nose holes, and the matching bright red Ronald McDonald eyebrows that glow from behind the sunglasses.

Learn from me, people: should wax be on your to-do list tomorrow, hit it up the polls before and not after. Better hairy than looking like leeches had a Stand By Me party on your face.

But at least those that saw me, welts and all, now know full well that funny story I wrote about a great,heart-warming gift from my MIL years ago, was absolutely 100% true.

What one kid really thinks of the SAT college entrance exam to hell
Election day musings: this one’s for the girls

An irreverent storyteller with a foul mouth and big heart, Kathryn Mayer (aka Kathy and/or Kate) is a writer, humorist, and (former) activist writing out loud with humor and grace about little life moments with big ripples, including the space between parenting and aging parents, social issues, angsty reflections of midlife, and, sigh, gun humpers. Still. Sometimes a big deal, sometimes not Mayer is a national award-winning columnist, according to the National Society of Newspaper Columnists, and her essays have been recognized as Voice of … END_OF_DOCUMENT_TOKEN_TO_BE_REPLACED