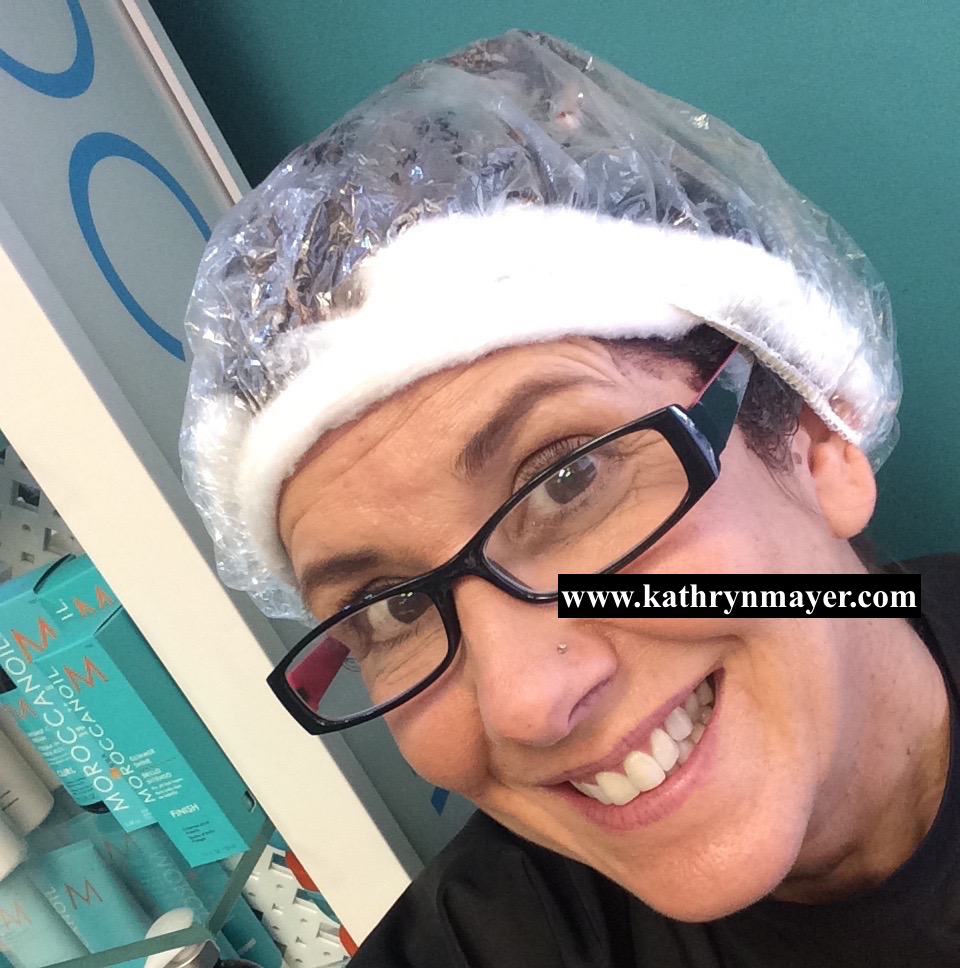 Like most women, the relationship we have with our hair stylist is sacrosanct. We’d cheat on our husbands before we’d leave our stylists. This is not hyperbole. This is truth. No one, regardless of credentials and school and referrals, can do our hair like the person who does our hair.

So it is written.

My appointments are booked months in advance. Now that I have short hair, I had to rethink my twice a year visit and now go religiously every 6-8 weeks, making that a Friday, so the good hair gets to go out to dinner or drinks or both, all weekend long, with maximum good hair exposure.

I get a good 3 days from a salon visit before I attempt for an in-home redo which never ever looks as good.

My most recent hair appointment was scheduled for Friday, January 20. They texted me to confirm the day before, which I did, gleefully, knowing this woman right here, would be at the Womens March on Washington January 21st with some damn fine hair blowing in wind. Ain’t no pussy hat gonna be covering these luscious locks; I would have freshly cut and colored hair for the great event.

Except the salon called to reschedule. Something’d come up.

“Isabelle’s been invited to the inauguration, so we have to reschedule your appointment.”

“But I just confirmed my appointment.”

“I realize that, that’s why I’m calling. She was fortunate to be invited to the inauguration so she won’t be available and we need to reschedule you. How about in two weeks?”

“That won’t work. I can’t wait that long. I’ll get my hair cut today. When can I come in? Right now?”

“Sorry, can’t do that. She’s leaving today for the inauguration, and will be gone all weekend to celebrate.”

‘Celebrate what are you outta your fucking mind I need my haircut and why would she ever in a million years want to attend this shit show and why would you so brazenly offer it as an acceptable excuse like I’d be THRILLED at her good fortune not thinking for one minute i could puke a little in my mouth?’

Which was an inside thought I kept inside so we can remove those quotation marks above.

So what do I do? Boycott a woman who works magic with my mid-life mop? Trust a woman with shears and permanent dye to do the right thing when hovering precariously over my democratic roots?

She’s conservative and I knew she’s republican and a fan of folks I am not a fan of. However, believe it or not, I am sometimes mistaken for both. And yet I thought she was smart. And human. I really did.

When to say when

I fired a web designer after she posted hateful Obama hoax comments on Facebook. I stopped eating at my all time favorite restaurant when the owner  shared unabashedly racist comments freely and proudly. I confront racist parents at sporting, school, writing events and counter racists/sexist/asshole comments from friends, family, colleagues, and neighbors with a ‘ummmm, I don’t understand what you mean, care to explain?‘

Hoaxers and gunhumpers are blocked from my social media feeds when their rhetoric bleeds into my conversation for all the world to see, or at least my network. I tolerate tolerance; I block hate.

Can I date someone who loves Trump? Not a chance.

This is none of that. This is just a woman choosing to attend a presidential inauguration – except, it’s the Trump inauguration. So is it all of the above? Or none?

I remember my own mother blasting Michael Jackson for peculiar behavior. But his music is just too good, I argued. “I’m not sending my kids for sleepovers, we’re just dancing in the kitchen.”

I don’t watch Woody Allen since he began fucking his daughter, but plenty do.

Growing up John Denver was lambasted for smoking weed, and had us giggling over “Rocky Mountain High” all through middle school. “High? Get it? Get it? HIGH?” God we were so middle school.

This is different though. And I know it. I wrote how ridiculous it is to keep politics out of art. (Read that here.)

Am I a hypocrite to stop going to this stylist because our politics don’t jive, or am I a hypocrite to keep going because I like her work so much I’ll excuse her complete lapse in ethics, moral compass, and human decency and dignity.

My only hope is that she will be equally offended that I wanted the good hair for the Womens March, and maybe we cancel each other out.

Not sure if I’m going to tell her that or not though; kinda like complaining to the waiter and worrying they’ll spit in your food, except I’ll have to wear that food on my head for all the world to see.

In the meantime, if you see me with bad hair, you’ll know what’s what, and let me know if you can recommend someone who can do my hair.

An irreverent storyteller with a foul mouth and big heart, Kathryn Mayer (aka Kathy and/or Kate) is a writer, humorist, and (former) activist writing out loud with humor and grace about little life moments with big ripples, including the space between parenting and aging parents, social issues, angsty reflections of midlife, and, sigh, gun humpers. Still. Sometimes a big deal, sometimes not Mayer is a national award-winning columnist, according to the National Society of Newspaper Columnists, and her essays have been recognized as Voice of … END_OF_DOCUMENT_TOKEN_TO_BE_REPLACED