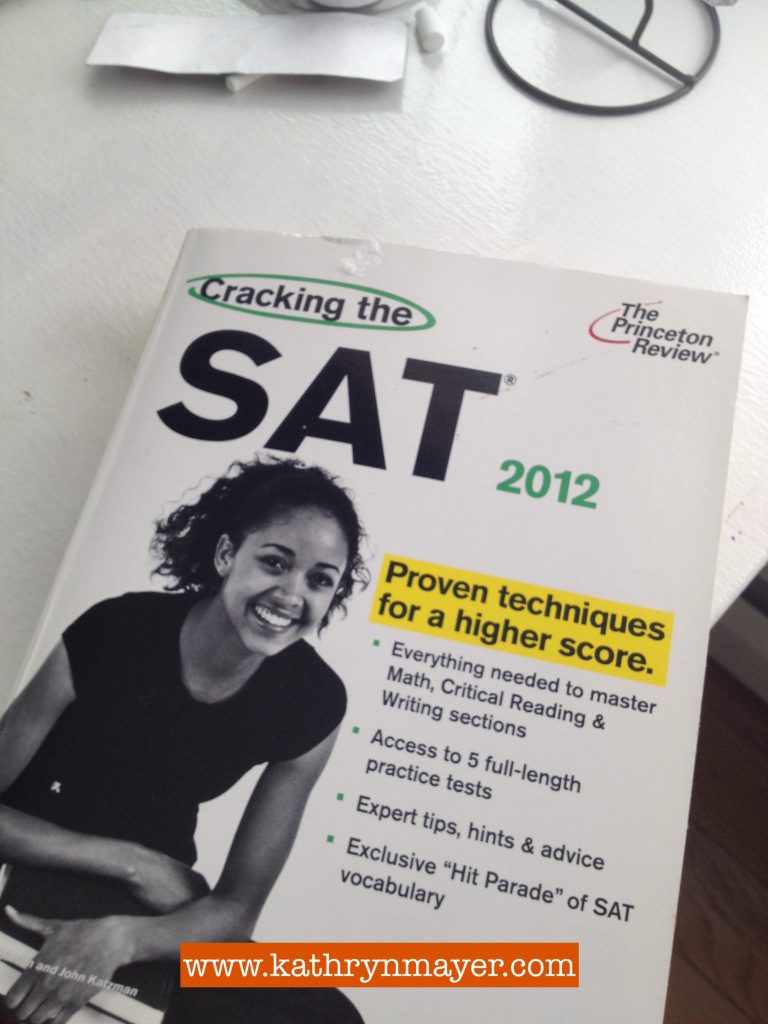 Standardized testing for college (SAT, ACT) is the golden ticket to college acceptances, make or break at many colleges of higher education. Parents know it, guidance counselors know it, and above all, our high school kids know it and dread it.

The highest scores obliterate lack-luster grades, questionable choices, and lack of community interaction. Your ho-hum high school contributions are forgotten if you score off the charts on the SAT, while kids that score low yet have worked their asses off for four years are tossed to the curb for the potential of fabulously successful test takers.

Even “test optional” colleges are in it. They open the wallets wider if scores are high enough for bragging rights to elevate their reputation into any “best of” lists.

For Kid1, we were told, if she could just get 10 points higher, she goes to the next tier of scholarship levels available. It’s a bidding war, and as college finances sky-rocket, many parents, this one included, will indeed pimp their kid out to the highest bidder. I’ve done it – twice, for the first two to go.

Kid3 did a wiser, more practical approach and went to a good school she could afford and would get her where she needed to be, without ever having to take a SAT or get into a pool ever again.

It’s hard not to get caught up in the madness, even if it is your fourth kid going through the process.

SAT test wake-up call: too late? too early? too crazy?

Last spring, the lacrosse coach asked who was taking the SAT on Saturday, to find out how many holes he would have in the squad.

Me, mom of the year, of course had no clue there even was test, or that my kid should be taking it if he ever wanted to get out of high school, and panicked. “WHAT?? What test? Are you taking the test? Did you sign up? Was I supposed to?”

Coach quickly corrected his mistake: “Oops, my bad. Yours is only a sophomore. He won’t need to take it until next year, unless of course, he wants to be recruited, then you should already have taken them. You might have looked into that.”

So no SAT for my sophomore. Now a junior, parents in the bleachers were saying their kid(s) have already taken the test – SEVERAL TIMES. The ACT too.

Have I failed my youngest kid? Will he miss out? How did I not know to sign up? Did I miss an email? A parent night? Will he be living on my couch for the rest of his life?

I wrote his guidance counselor in a panic, to which she calmly responded: practice test in March, real test in May. ACT in June. Retake early next fall if you want to. If he wants to. If he needs to.

Taking that test, any test, but especially that test and all its little components, is excruciating. Kids think their entire future relies on it. Which it does. And doesn’t. If you don’t want it to.

I was reminded of the torture that is the dreaded SAT as Boy (kid4) marks his calendar with a reminder for a Saturday morning of torture.

A few years back, I found the SAT practice book in my daughter’s (kid3) bedroom. This was weird, as Kid3 is definitely not a planner, but instead a catcher-upper. It was abandoned there with glee by her older sister, been-there-done-that, too glad to close this chapter of her high school career, and get on to having a fabulous senior year. She even took the time to engrave the hand-me-down with this catchy, personal inscription: 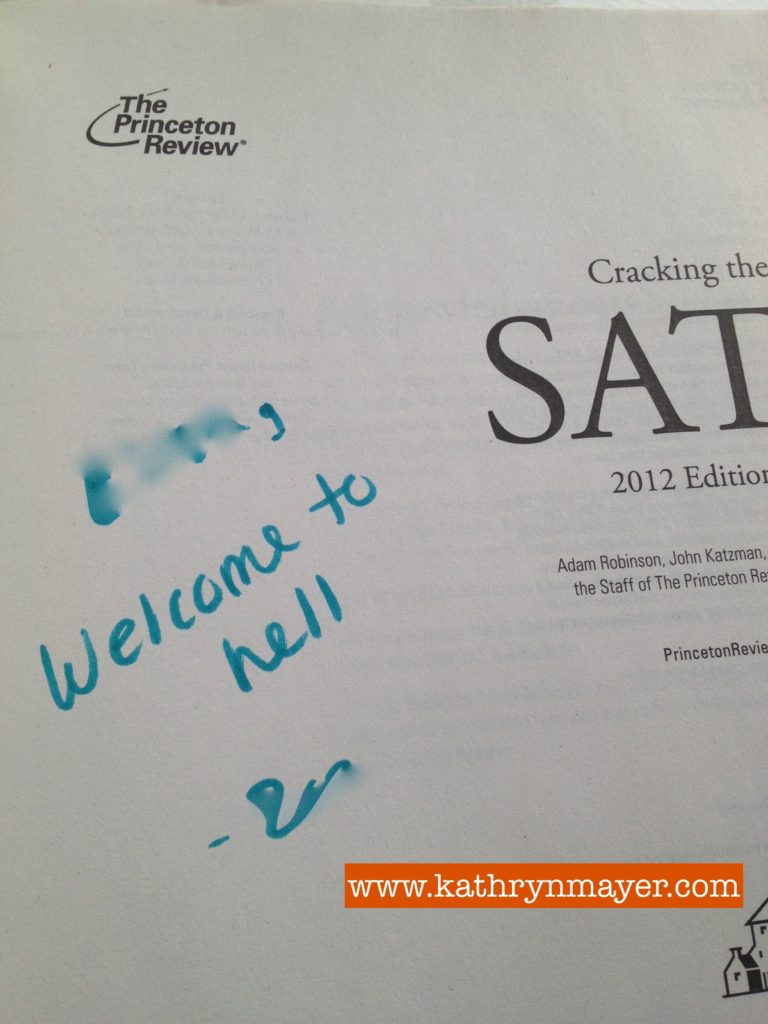 My advice? Take the test. But remind your kid they are more than a test score. They know it, but they need to know you know it as well. And we do, we just sometimes need little

An irreverent storyteller with a foul mouth and big heart, Kathryn Mayer (aka Kathy and/or Kate) is a writer, humorist, and (former) activist writing out loud with humor and grace about little life moments with big ripples, including the space between parenting and aging parents, social issues, angsty reflections of midlife, and, sigh, gun humpers. Still. Sometimes a big deal, sometimes not Mayer is a national award-winning columnist, according to the National Society of Newspaper Columnists, and her essays have been recognized as Voice of … END_OF_DOCUMENT_TOKEN_TO_BE_REPLACED