Nobody else is flinching. They’re all breathing. In and out. In. And. Out.

Eyes gently shut, all the women are centered on their mats, breathing, hands at heart center, I can’t help but think like a praying mantis. Who kill their partner after sex.

But these women don’t seem violent at all, they’re all super chill. I know, because my eyes are wide open and I’m scanning the room for another lost soul, somebody, anybody else with eyes rolling into the back of their head.

But it’s just me. Forever alone in my angst.

My very favorite yoga teacher, Wendy, is teaching a workshop, Yoga for Menopause. Yes, really. Which I would have named: Come Get Your Om On and Maybe You Won’t Kill Somebody in the Big Y 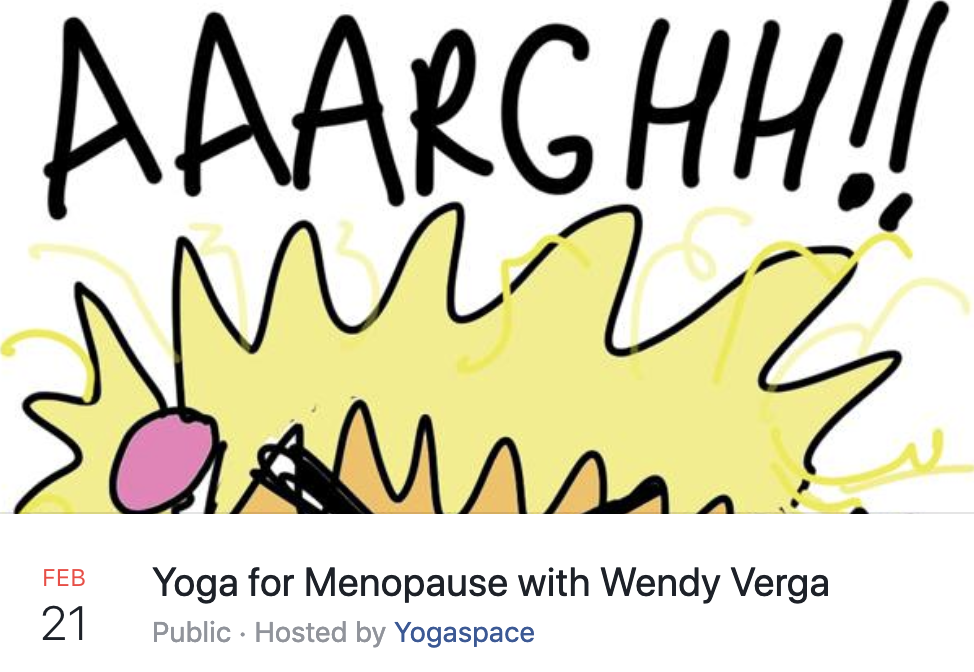 Anyway, I signed up for the class, because who can’t benefit from a middle of the day, middle of the week yoga class for an entire month, specializing in all that ails me? And to think, a room filled with women just like me, and not some hotties on spring break putting their foot behind their head without either a grunt, or fart, or blowing out the L1S4 – again – otherwise known as my ass.

I got there early, to make sure my mat was safely in the back of the room, preferably near a wall.

She once said this in class and I want to tattoo it on my husband’s face: 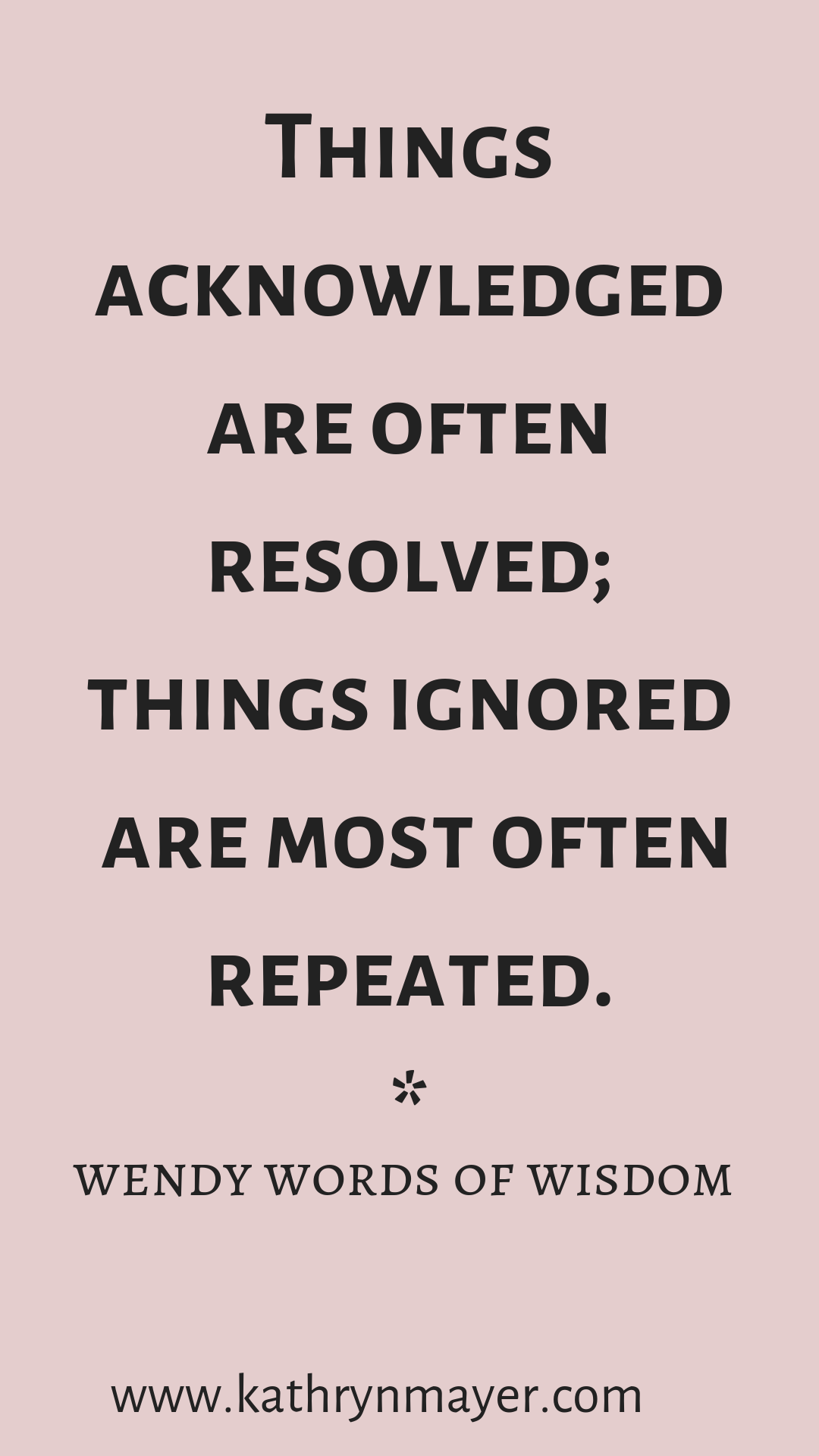 So I absorb her lofty affirmations that might often be just a bit out of my reach, and avoid when she tiptoes into the blissdom touchy feely part of yoga that are a little too Disney for me, a little too Sunday School, stepping over that spiritual line between church and state, or mind and La La land.

I believe in the mind body spirt connection, I do I do I do.

I just don’t like the Hallmark made-for-tv-Nicholas Sparks type soap telenovela inspirational mediations that sometimes leak out of yoga teacher mouths. I had such high hopes for this one.

So at Yoga For Menopause, the first session, on mindfulness and meditation — was great. Meditation fabulous. As you can imagine, I have a hard time quieting the mind, but am working on it and this is absolutely helping.

The contemplation here: timely, accurate, real, and inspirational. Room filled with women like me, all looking at each other, birds of a feather. You too? You too? The secret was out: we were all there for the same reason: we wanted to find inner peace before we ate every Girl Scout cookie in Connecticut.

Or that’s why I was there. Maybe not everybody.

Second session was on body: the physicality and importance of bone mass and heart health. Nuts and bolts and science. Yoga teacher Wendy asked, jokingly, for permission to curse –DENIED – by a yogi who doth complained too much. I sure wasn’t gonna be her friend.

“I hope it’s okay to use the correct biological term vagina,” she asked, somewhat joking, an instant essay.

The same woman scoffed, actually scoffed at the word vagina, (maybe she didn’t have one but wanted one? I dunno, just thought of that now) but for fuck’s sake, I could sense that the teacher was like FOR FUCK’S SAKE too, so I totally loved her even more.

Then came restorative yoga, the class I would normally skip because anyone who even utters the words “me time” can wonk off, but I went and OM-MY-GAWD, make time for that! It was like a massage and therapy and sex and a nap and I will be back for some more of that self-care bullshit cuz it really isn’t bullshit. Totally zen. I get it now.

Final class was a buffet, a little bit of everything, all wrapped up with a pretty yoga bow. This was a terrific workshop, and I am thrilled I did it and feel better about myself and my place in the world. Plus I can touch my toes, and shoppers in the Big Y are safe.

But I sensed a change in the air as this final class came to a close. The class was great, but it was the language was getting a little less vagina-ey, and a little more hearts and flowery.

I felt the cliché before I heard it, like old people feeling a storm in their knees, or cows sensing the rain and huddling under a tree.

She began the contemplation about changes and embracing all of life’s ages and stages – we were getting perilously close to that Lifetime movie trailers … the cliché’s were pinged around the room, absorbed by most, hitting me full on in the face like a puddle of mud splashed when a car whizzes by, leaving you soaked, dirty, and smelling like wet dog. 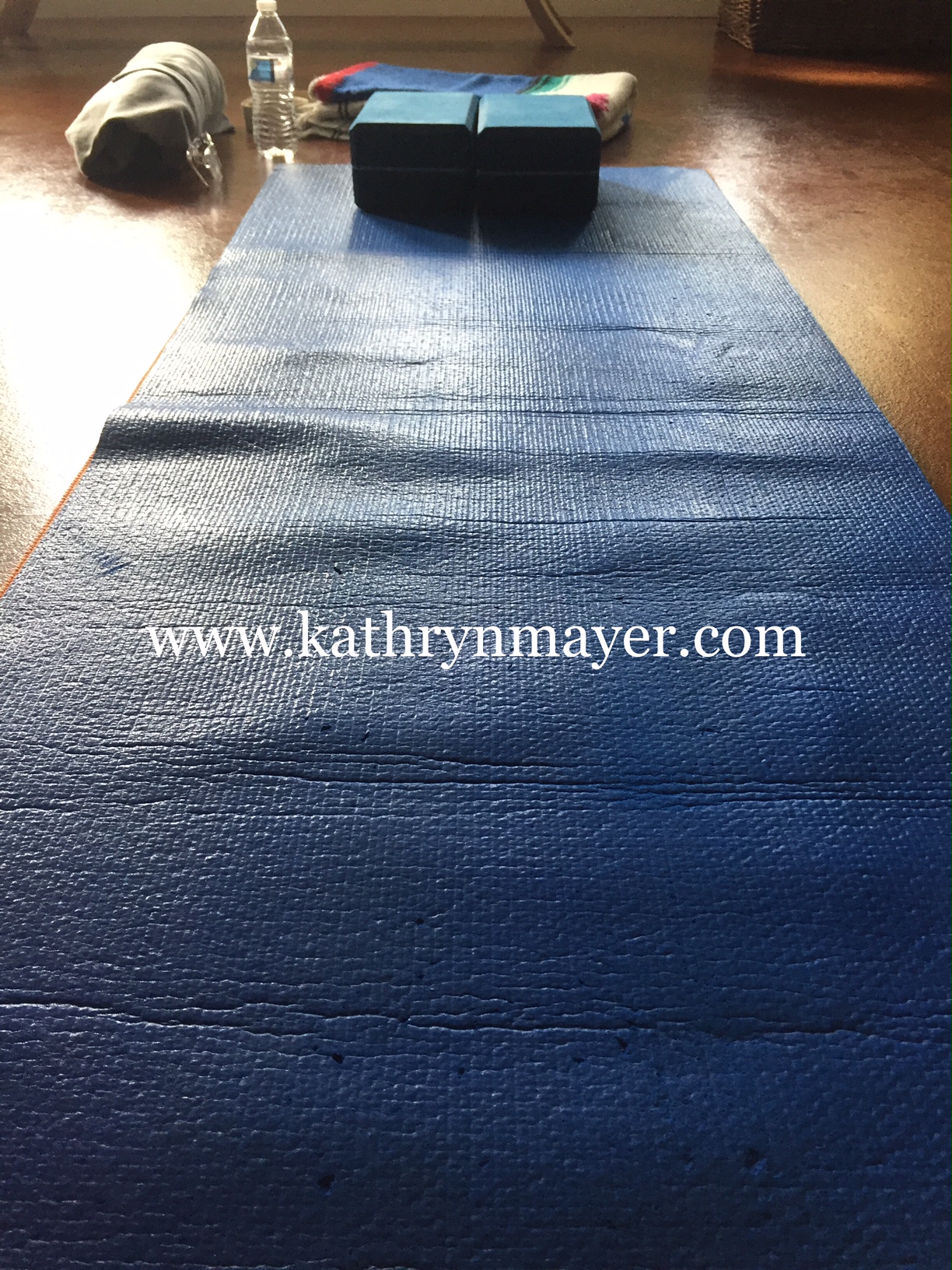 People were loving it.

Yoga is tough, and it’s not easy being the teacher, especially in a room desperately seeking estrogen.

Seated comfortably on both my sitz bones, hands folded at heart center, eyes gently closed, tongue loose and away from the roof of my mouth, jaw unclenched, I could hear her clearly, hear the menopausal women sigh in contentment. I felt it in my soul and bones before I heard with my ears where she was going, my favorite ex-physical therapist Queens grown middle aged momma I loved so much …

“The change emerges” (eye-lid twitch) “within us all, what lays dormant” (jaw clenched) “like the blossoms” (oh for fucks sake) “and rebloom,” (gag) “brighter” (with age spots) “into a rebirth” (up from the grave he arose!) and before my jaw clenched and heart center sake and third eye rolled into the back of my head,

“From this beautiful metamorphosis ….  You will all emerge a beautiful – – –” offorfuckssake.

NOOOOOOOO!!!! One eye blinked open, I stared at the back of so many heads, to see my beloved teacher in the front of the room, singing our praises, for those of us luck to be in this chapter of life and both my eyes slammed open wide – trying to block out the cliché that was about to land in this room, welcome by so many, but not by me. Metamorphosis …. don’t do it, do not bring out the cocoon, the caterpillar the friggin butterfly.

And it landed like a brick, this mention of becoming a butterfly at this stage in our life, said with such conviction and sing-song and glee, like this was the secret we had paid to hear.

But not me. I didn’t pay to hear that, in fact, it sounded like something someone at the age of 15 or 16, or maybe some young and dumb recent college grad when asked what they thought a middle aged woman would want to hear — and thinking 50 or 60 or 70 was so far away, perhaps make it puke with sunshine and roses, with images of, yeah, this will work, butterflies and the changes of seasons!

Not this butterfly. I expected more. More realism, more facts, or if more poetry, than not something glibbed from a MadLibs of Menopause, spoken like we didn’t know what was happening to us or why.

Butterfly? I don’t think so, but thanks. I’m morphing, alright, that part is correct, but the butterfly cliché hit me in all the wrong places, but what do I know. Everyone else seemed to float out of there, reborn. But not me, somehow the blissdom had skipped my mat, and left me hungry for more.

An irreverent storyteller with a foul mouth and big heart, Kathryn Mayer (aka Kathy and/or Kate) is a writer, humorist, and (former) activist writing out loud with humor and grace about little life moments with big ripples, including the space between parenting and aging parents, social issues, angsty reflections of midlife, and, sigh, gun humpers. Still. Sometimes a big deal, sometimes not Mayer is a national award-winning columnist, according to the National Society of Newspaper Columnists, and her essays have been recognized as Voice of … END_OF_DOCUMENT_TOKEN_TO_BE_REPLACED