Time for your yearly.

Election day is fast approaching, and you may not like it, but it’s time to go to the polls for the health of your vagina. I mean, your community.

If your town is running smoothly, you’re barely aware of the politics that make it so: the councils, commissions, and boards who keep the town going, bills paid, grievances heard, solutions provided. These public servants are your friends, neighbors, and not-so-friendly fellow citizens, elected into office by less than a handful of votes, especially when off-year elections.

Still, once in office, they show up and do their civic duty they were elected to do from the police commission, board of education, water & sewer authority, finance committees, to the big leagues: legislative council and first selectman or mayor.

If they do their jobs well, it appears seamless to the rest of us. They show up, the third Tuesday or second Thursday or first Wednesday and scour over budgets and potholes and storm damage. They evaluate emergency response protocol, plastic bags, pensions, and sidewalks.

These folks volunteer their time to the place we all call home, and we should all be grateful.

If nothing goes horrifically wrong, no hurricanes, mass shootings or tornados, if nothing directly affects you or your family, you just go about your life never thinking about the great and powerful Oz’s who makes the magic happen, day in and day out, with little to no fanfare or complaints.

Take, for instance, if your next-door neighbor goes hog-wild with a chainsaw early one weekend morning, cutting down EVERY SINGLE TREE in the dense woods between your house and theirs – clear-cutting nearly an acre then, when he’s run out of trees, proceeds onto your property to continue the chainsaw massacre. Watching this from the what used to be the privacy of your own yard, you’ve had enough and coffee cup sloshing, jammies and no bra, you leap off your deck and rush him like the Lorax waving your arms and scream STOP STOP STOP and he does – slightly shocked at the outburst from the jammie clad coffee deprived mama next door — but you’re pissed and think, there’s gotta be a law against this.

Shouldn’t there? Who do you call? Who’s in charge? Do we have people for this?

So you show up at a town board meeting to air your gripe during “Public Comments” at which there is no other public then you, and five old white guys, amazed an actual living breathing human other then them actually showed up to a meeting, and they listen, you think, and smile and nod, and suddenly you realize, there are no grown ups here. These guys are in charge. These are the people making the rules. Or not. 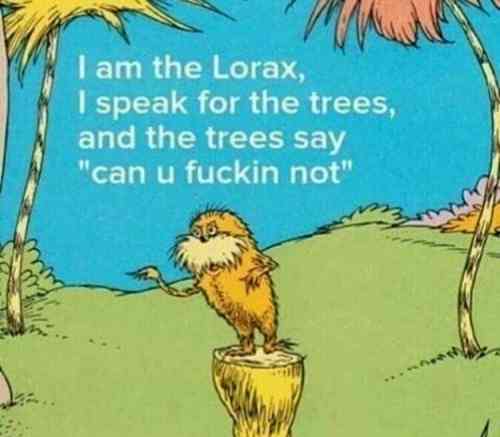 But you’re worried about your trees and the chainsaw wielding neighbor, so settle in for a long night and, as discussion progresses you can’t stop thinking over and over:

Who the hell elected these bozos?

You did. We did. By staying home and thinking, who cares? Doesn’t affect me. I’ve got soccer, work, yoga, groceries, a date, gotta shave my legs.

By not voting in a local small-town election because you thought you didn’t know enough or care enough or this small-town bullshit doesn’t affect you, then you help elect people who probably shouldn’t have gotten the slot.

And then something crazy goes down and you need help or information or a restraining order. IE crazy chainsaw guy.

Or maybe simpler things, like the high school athletic program is charging $350 a kid and you have four kids, or sewer line stops two houses down from your new store, or the bear in your backyard looks sketch and is eyeballing you, or  … the plastic bag ban that keeps you up at night wondering how you’ll ever live without 10,085 plastic bags shoved under your kitchen sink until the day you die or move to the retirement village over on Walnut Hill.

When they’re working well, you’re barely aware of them. Healthy. Happy. You don’t even know they’re there. None of us do. Vaginas just “are.” Like elbows. Well, maybe not elbows.

Vaginas are amazing in their simple functionality. Much like local government. Vaginas are self-regulating, collaborative, smooth operating, behind the scenes intricate machines with little to no recognition, except with superhero baby-making powers, that plays well with others. With consent. Eh-hem.

Until something goes radically wrong. Like an antibiotic. Or a rogue wax. Or too much sangria. Or a wet bathing suit (although I think this last one is bullshit).

Like when you – or those of you who have the anatomy to do so – get a yeast infection.

When that happens, you’re not just aware of your vagina, it’s ALL you are aware of.

You quickly become a GIGANTIC hurting vagina walking around disguised as a regular woman but all you want to do is run to the ob/gyn or Planned Parenthood (they’re not just for abortions ya’ll) and BEG for Monistat (and not the 7 day bullshit) to lather ALL OVER YOUR BODY inside and out — right there in the Walgreens parking lot. You don’t care. You need the relief.

People are elected by the people who vote and those who don’t bother to head to the polls. In towns like mine it’s a handful of votes that makes or breaks a candidate, cuz everyone hasn’t had a yeast infection, so we don’t think it matters who’s in charge until it’s your vag that’s on fire, or a your neighbor goes haywire with a Husqvarna.

In little itty-bitty off-year elections nobody cares about, as well as Anybody but Trump 2020. They all matter, but local elections matter most for the health of your community. Local government may seem boring — but these men and women (please please more women) do the hard work that keeps things humming along healthy, budget-wise wealthy, and wise.

To keep your town or city healthy, do your yearly exam at the polls on Election Day

Here’s to healthy vaginas and towns. May both be healthy and active, and choose the right person to make them work.

Writing Out Loud: Read650 Where Writers Read
Who I’m voting for and why on Election Day (trickle down effects of hate)

An irreverent storyteller with a foul mouth and big heart, Kathryn Mayer (aka Kathy and/or Kate) is a writer, humorist, and (former) activist writing out loud with humor and grace about little life moments with big ripples, including the space between parenting and aging parents, social issues, angsty reflections of midlife, and, sigh, gun humpers. Still. Sometimes a big deal, sometimes not Mayer is a national award-winning columnist, according to the National Society of Newspaper Columnists, and her essays have been recognized as Voice of … END_OF_DOCUMENT_TOKEN_TO_BE_REPLACED